Public art brings neighbors to the table in Boston
By Trust for Public Land
Published November 19, 2019
Spread the Word

Public art brings neighbors to the table in Boston

For artist Daniela Rivera, every walk through Boston’s Grove Hall neighborhood is a sonic adventure. “In a few blocks you’ll hear people speaking with all kinds of accents, you’ll hear music and languages from across Latin America, Jamaica, and the United States,” she says. “For a tiny little neighborhood, it has an incredibly rich cultural fabric.”

In recent years, Grove Hall residents worked with the City of Boston to identify a vacant lot across the street from the local library that—if transformed into a green, shady park—would help keep the neighborhood cooler and provide a welcoming green space for more than 12,000 people who live within a 10-minute walk. Now, we’re finding ways to invite the community to the site, so people can begin to imagine its future as a great public space. 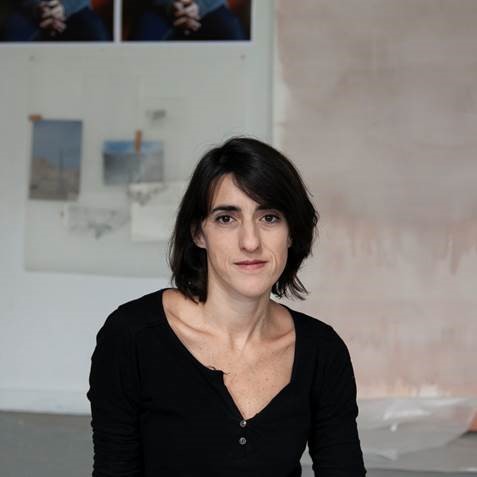 Rivera, who immigrated to Boston from in Chile in 2002, creates large-scale sculptures and paintings, many of which draw from her own experiences as an immigrant.Photo credit: Daniela Rivera

This fall, that has meant an installation by Rivera, an artist whose star is on the rise in Boston’s art world and beyond. She’s a professor at Wellesley College, has a solo show this fall at the Fitchburg Art Museum, and last month she was awarded the prestigious Rappaport Prize. Rivera, who immigrated to Boston from Chile in 2002, creates large-scale sculptures and paintings, many of which draw from her own experiences as an immigrant. When she was planning her first big public art installation for the vacant lot in Grove Hall, she wanted to make something that paid respects to this vibrant neighborhood’s immigrant heritage.

The result: A project called Sobremesa, a Spanish word for the tradition of lingering at the table after a feast, sharing stories. “The longer you stay, the more successful the meal has been,” Rivera says. To pay homage to this beloved tradition, she rounded up twenty dining room tables and fit them together into a single structure: a big community table that also recalls a stage. 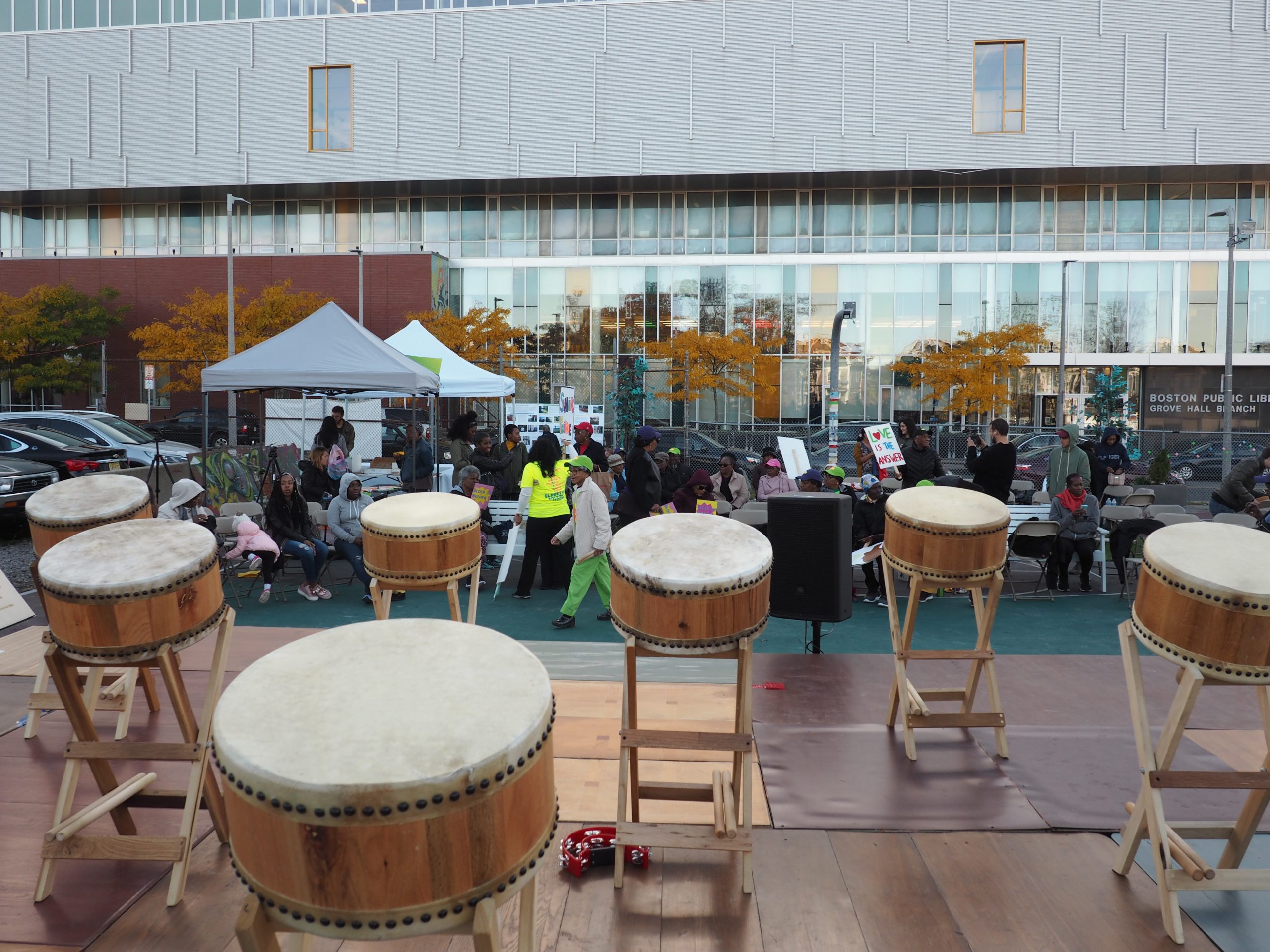 This fall, we partnered with Hydroflask and Lyft to present “Sobremesa,” a participatory public art project by Daniela Rivera. Photo credit: The Trust for Public Land

Fittingly, the installation opened with a community celebration in September, and neighbors took turns singing karaoke atop the new structure. And Rivera has tapped her students for help bringing more stories from Grove Hall residents into the piece: they’ve partnered with students from a nearby middle school to record oral histories from Grove Hall neighbors, and those collected stories and recollections can be played from speakers mounted under the tables. At a block party in October, Sobremesa was the stage for a group from the senior center across the street, performing spoken word and Japanese taiko drumming.

Besides its memories of good food and time spent with loved ones, Rivera says the concept of sobremesa is meaningful as “a democratic thing. It’s the idea that everyone has agency, everyone is invited to the table. No matter the age, you have a voice, and an experience to share.” Sobremesa is a safe space, where people can let their guard down and connect. 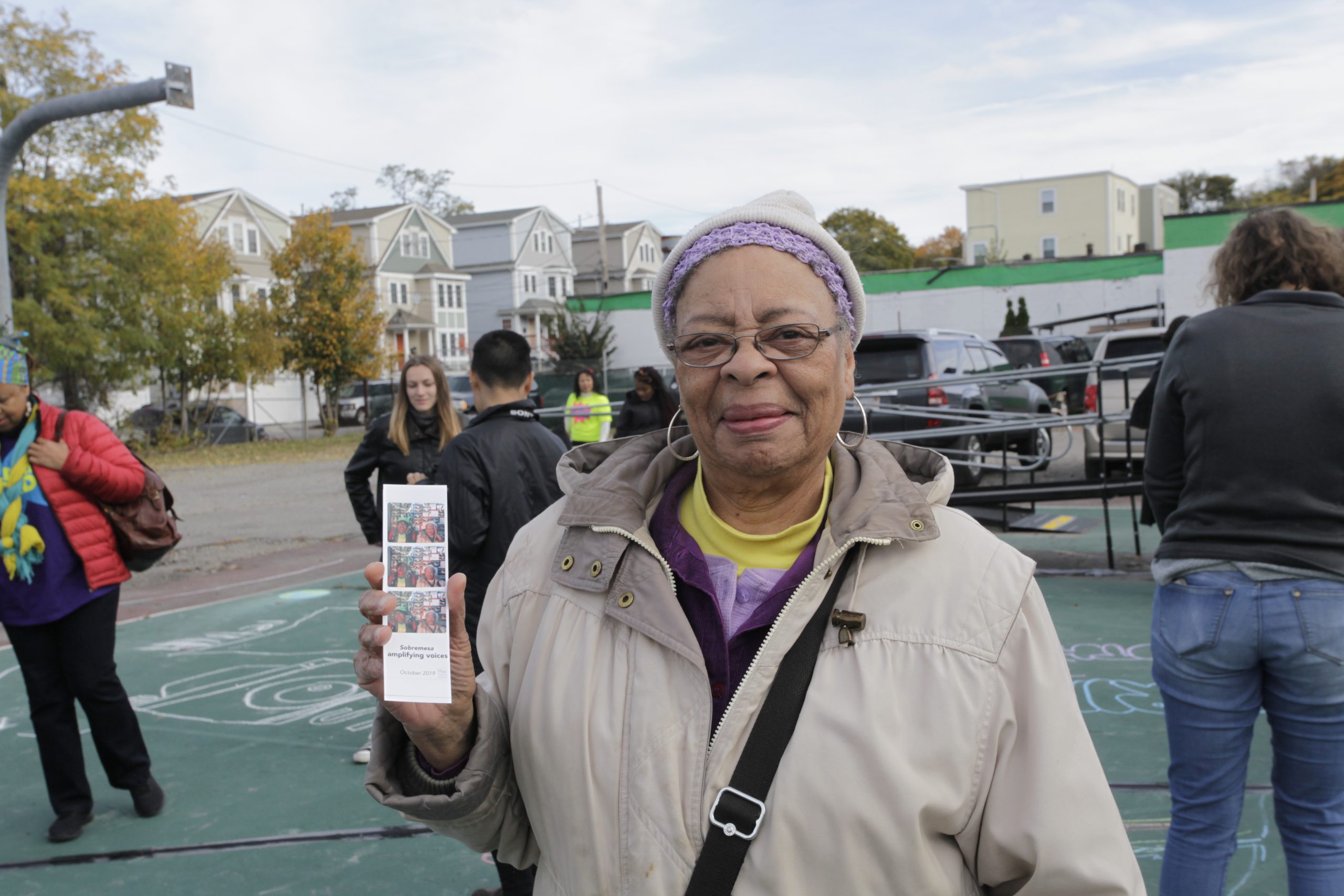 Rivera says Sobremesa represents the “idea that everyone has agency, everyone is invited to the table. No matter the age, you have a voice, and an experience to share.” Photo credit: Daniela Rivera

Each of the 20 tables in the piece is stained a different color, which—when viewed all together—recall the boundaries drawn on a map. “As you move across the tables, you’re crossing boundaries,” she says. “In a neighborhood like Grove Hall, with so many people and cultures from all around the world living together, what better place for that to happen?”

Sobremesa wrapped up with a community celebration in October, but Rivera’s work is just one example of the ways that we’re helping engage Boston residents in making the most of their public land. With support from Hydroflask and Lyft, we’re creating a series of “pop-up parks” across the city, with temporary furniture, games, and vegetation. In Grove Hall, we’ll continue to work with neighbors who want to plan, design, and create a place that everyone will use and love.

01 / 09
How We Win: A Look at How TPL Secures Public Funding for Parks and Open Space

02 / 09
Unforgettable Adventures along the Appalachian Trail

04 / 09
Public art brings neighbors to the table in Boston

06 / 09
On the Appalachian Trail, a summit reached and a promise kept