On the Appalachian Trail, a summit reached and a promise kept
By Trust for Public Land
Published December 23, 2017
Spread the Word

On the Appalachian Trail, a summit reached and a promise kept

Mount Katahdin marks the end of many long journeys. The 5,267-foot peak is Maine’s highest point, the summit of a formidably steep and rocky climb from the nearest trailhead. The mountain is also the northern terminus of the Appalachian Trail, where thru-hikers culminate months of trekking long miles under heavy loads.

For Brian Janz, standing atop Katahdin this past August meant he’d reached his goal of completing one section of the Appalachian Trail in each of 14 states it passes through. He’d traveled to the AT from his home in Memphis for some of the usual reasons: he’s a lifelong outdoorsman and travel buff who relishes a challenge. But he also hiked to keep his word—a promise he’d made to his late wife, Lisa, after her diagnosis with terminal cancer. 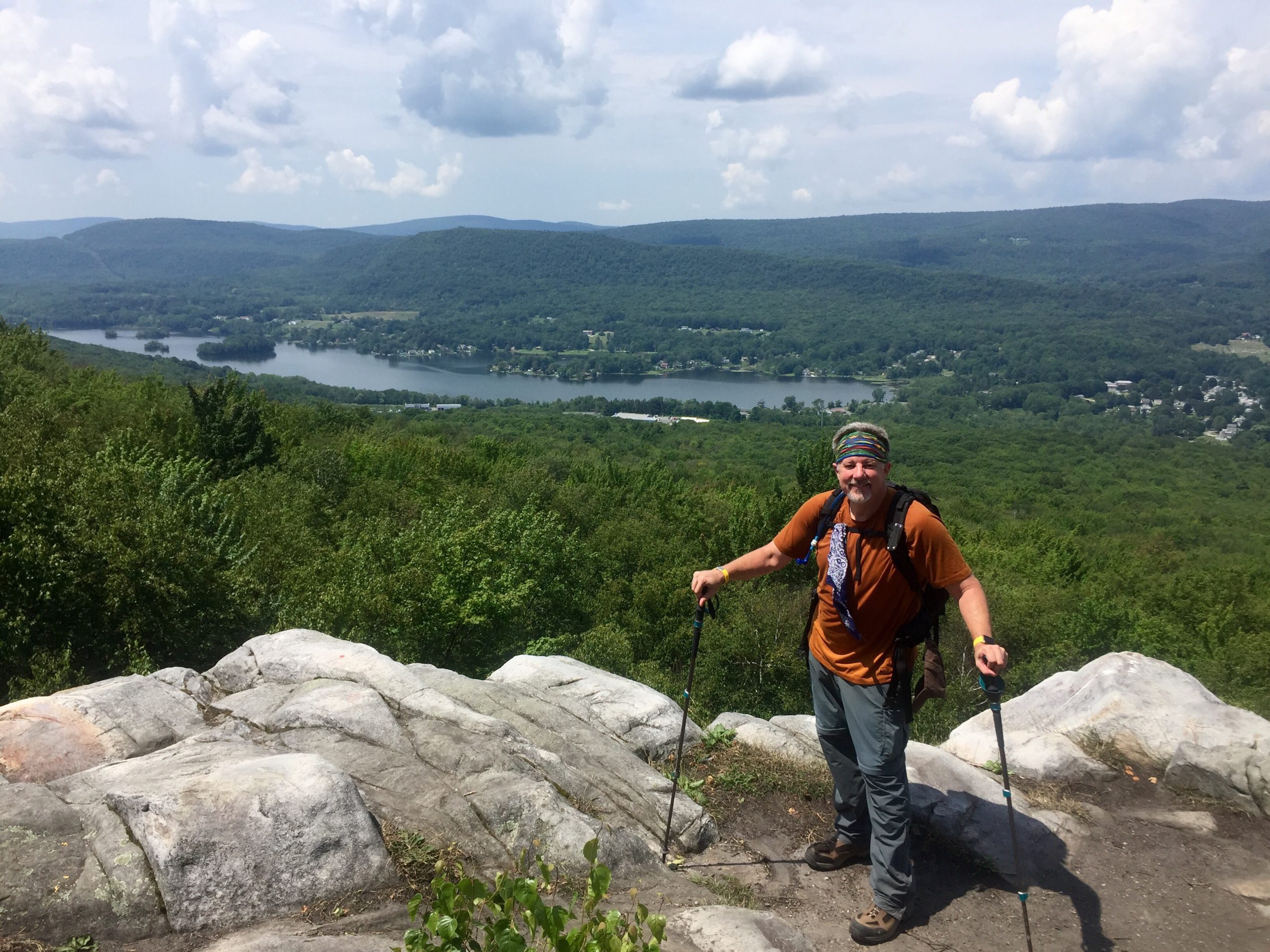 Brian Janz on the Appalachian Trail in Massachusetts this summer.Photo credit: Brian Janz

Brian and Lisa fell in love as teenagers, went to college together, and married soon after. The couple settled in Memphis and raised three kids, and for 39 years, they shared a life filled with nature, travel, and adventure. “Hiking, biking, swimming, skiing, sailing, you name it. We did everything together,” says Brian. “We got out and spent time in nature together as often as we could.”

Lisa was the faster swimmer, but Brian could usually set the pace on long bike rides. They’d take turns motivating and challenging each other—always working as a team. “I think we were both competitive people, but we learned in our early 20s not to compete with each other,” says Brian. “A lot of couples can’t strike that balance, but we just had a way of working together that allowed us to enjoy whatever we were doing.”

Lisa was healthy, active, and strong. “She did everything you were supposed to do. So when we got her cancer diagnosis in 2015, it was a shock,” says Brian. As they grappled with the devastating facts of the illness, the couple worked hard to preserve their adventurous life together. If anything, says Brian, Lisa’s diagnosis gave them added motivation to make the most of each waking moment. “We still had a lot of things we wanted to do together. So we really put that bucket list into action.”

One of the adventures Brian and Lisa had long dreamed of was to hike the Appalachian Trail. A thru-hike is a 2,200-mile, 6-month endeavor—and they knew Lisa didn’t have that kind of time. So they got creative, resolving to hike a section of the trail in each of the 14 states it passes through, carefully choosing routes in range of medical help.

Brian and Lisa set out on a week-long road trip to tackle the southern half of their itinerary. They sought the most scenic day-hikes in each state, taking on demanding but rewarding trails like Charlie’s Bunion on the border of North Carolina and Tennessee and Grayson Highlands in Virginia. “Lisa was a real trooper,” Brian says. “She’d already had two major surgeries and been through a round of chemotherapy at that point, so she was somewhat frail. But she wanted to see the best of each state. We just took our time, rested when we needed to rest, and really took in the scenery and the time together.” 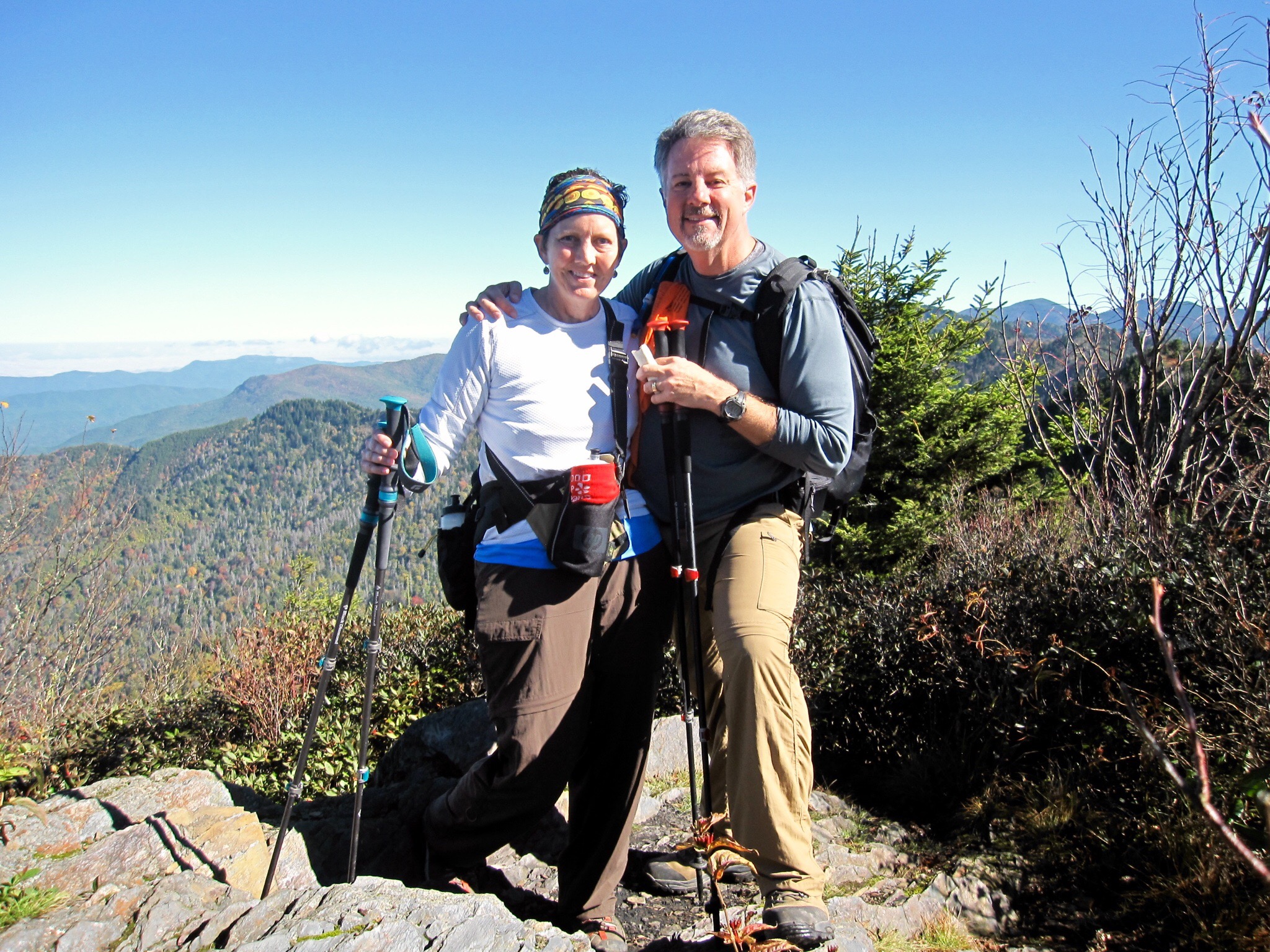 Lisa and Brian Janz on their 2015 trip along the Appalachian Trail. The couple spent 39 years by each others’ side, partners in exploration, adventure, and life.Photo credit: Brian Janz

After their week on the trail, they returned home to Memphis with new memories, beautiful photos, and hope that they’d complete the northern half together in the spring. But Lisa’s condition deteriorated. She passed away in August of 2016.

“Before she died, we promised each other that I’d finish all 14 states,” says Brian. “Lisa wanted to make sure I’d keep doing the things we loved to do together.”

Determined to honor Lisa’s wishes, Brian read hiking blogs and asked friends to recommend their favorite trails in each state. He hit the Stairmaster with a heavy backpack on to get in shape, knowing he’d have only a week-long road trip to complete sections of the AT in New Jersey, New York, Massachusetts, Connecticut, New Hampshire, Vermont, and Maine. 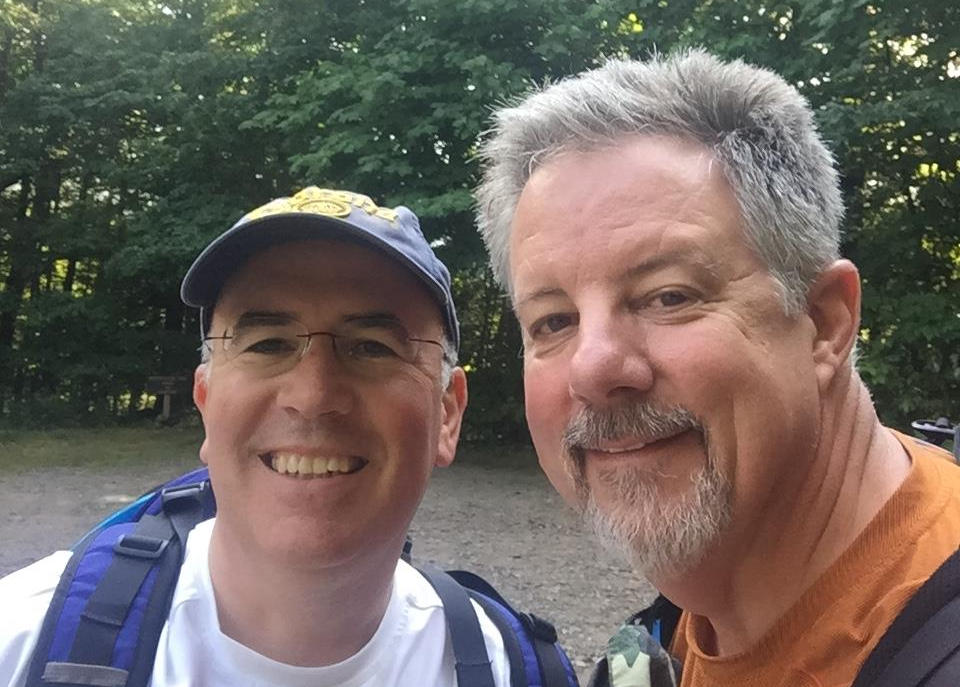 Brian completed some hikes this summer alone, but was also joined by old friends along the way. His longtime friend Glenn joined the trek in New Hampshire.Photo credit: Brian Janz

By August, Brian was ready. Some trails he hiked alone, but on many days he was joined by others who came to support and encourage him and remember and celebrate Lisa. There were five friends at Brian’s side the morning he set out to for the summit of Mt. Katahdin—22 months to the day since he and Lisa first began their AT challenge. The group encountered gale-force winds and thick clouds, so they didn’t even see the famous sign marking the summit until they were just a few steps away. 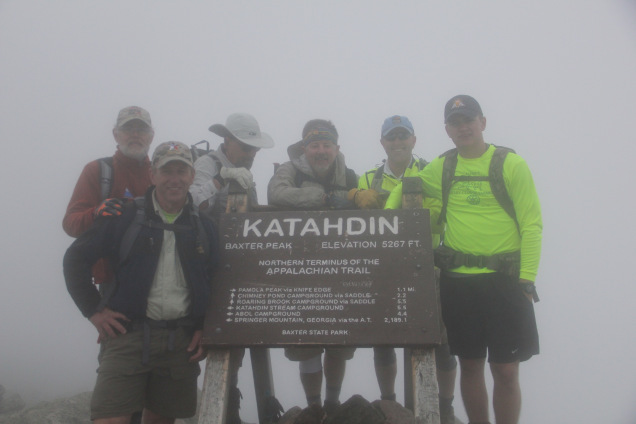 Brian, middle, on the summit of Mount Katahdin with the friends who joined him for his final day of hiking on the Appalachian Trail.Photo credit: Brian Janz

Brian and his buddies pulled on warm layers, posed for a few photos at the summit, and rested for long enough to catch their breath. A raven appeared through the gloom. “Lisa and I were bird people,” Brian says. “We even discussed that if we were to share any messages between us in the future, that we’d do it through unusual bird sightings.” He watched the bird hover and soar overhead, imagining what Lisa would say if she were there.

“I was more purposeful this time around,” Brian says of completing his AT journey. “I had Lisa as my spiritual guide. I had committed to her, and I wanted to make sure nothing would get in the way of that promise.” 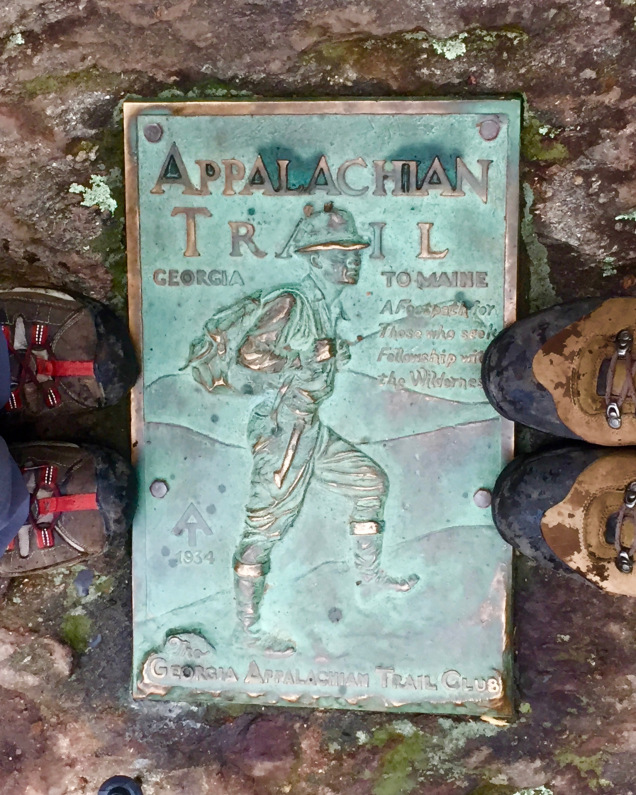 Brian and Lisa’s boots on the day in October 2015 that they began their adventure on the Appalachian Trail. Photo credit: Brian Janz 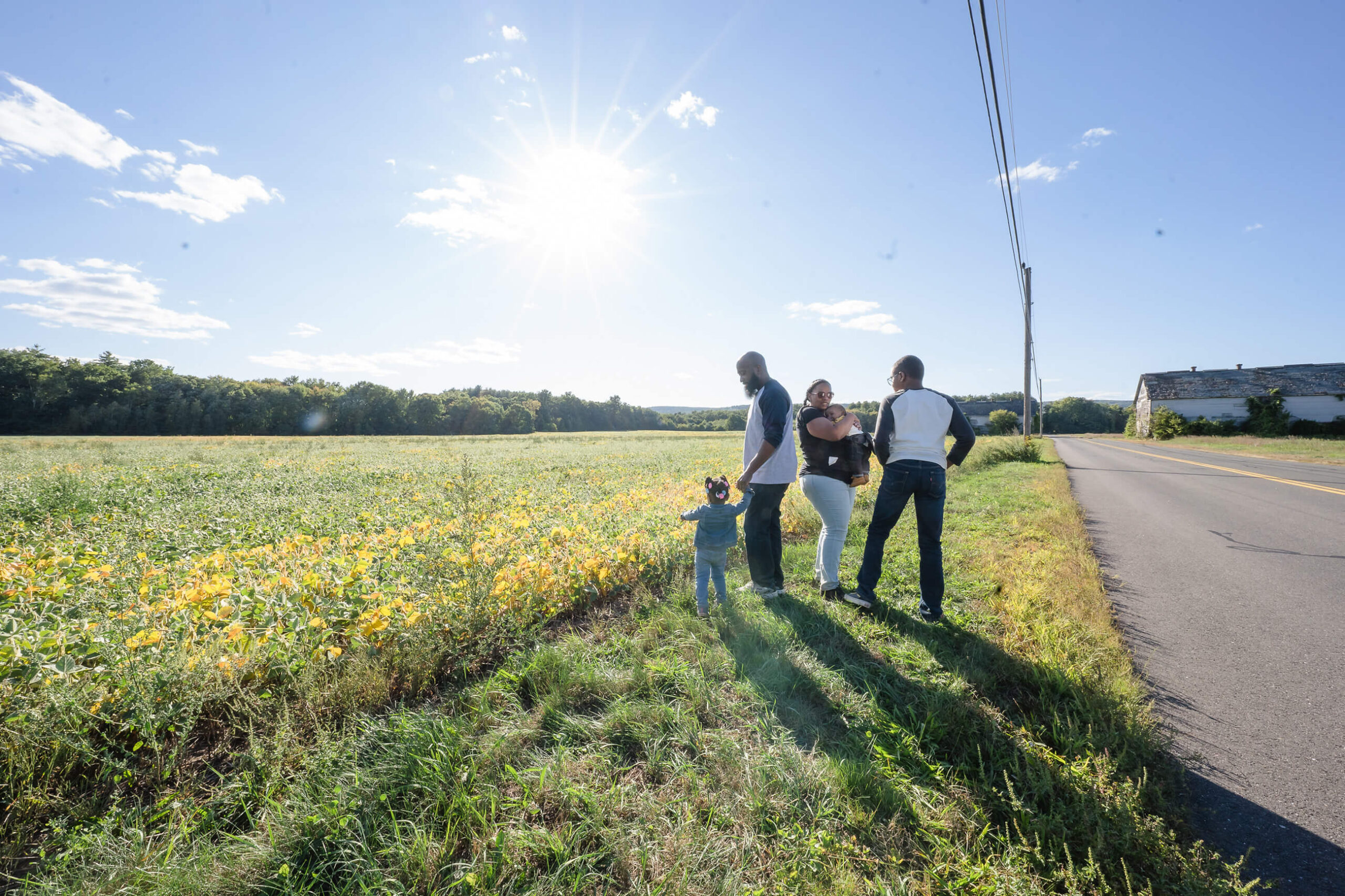 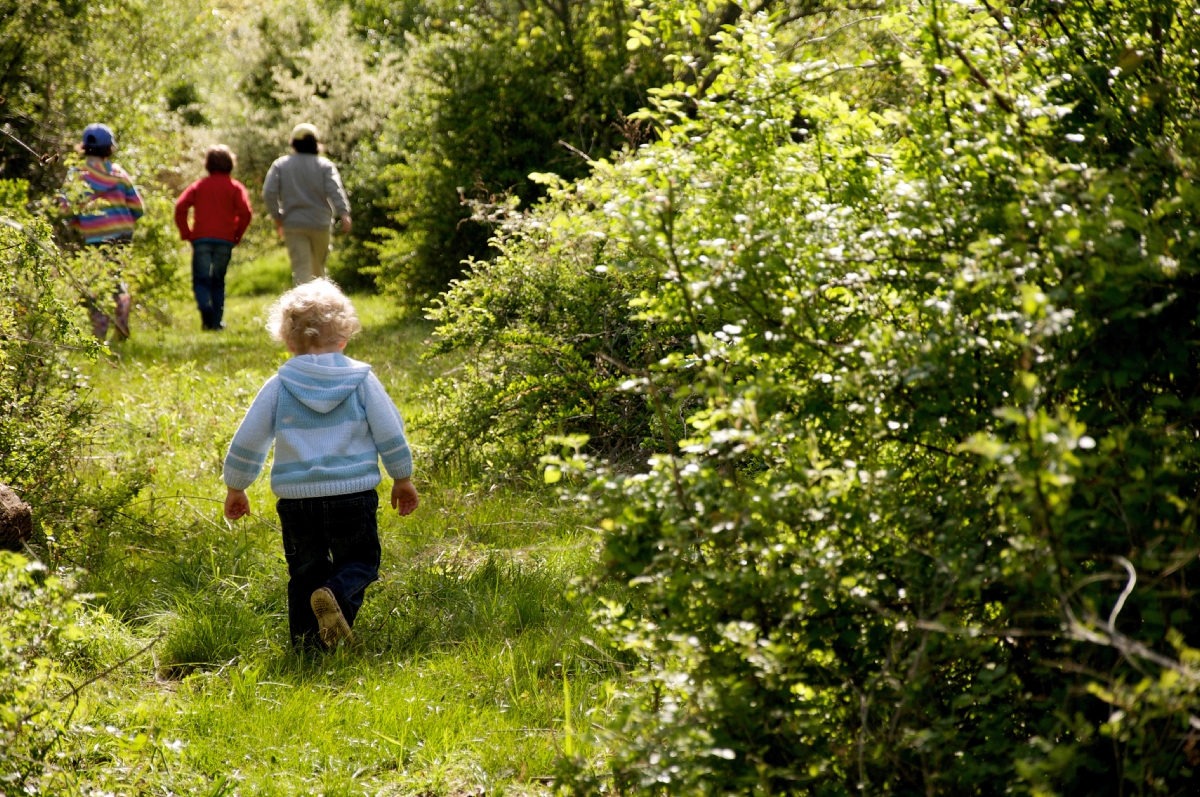