Stories
Four Places to Watch the Spring Bird Migration in the U.S

Explore four birding destinations—from coastal Maine to the Mojave Desert—that TPL has had a hand in conserving. These parks and wildlife refuges have plenty of avian residents, from songbirds and shorebirds to hummingbirds and hawks.

All you need to tap into this colorful avian pageant are a pair of binoculars, a field guide, and a little patience. With apps like eBird, you can see which birds have arrived in your area on any given day.

While some songbirds start migrating as early as February, the busiest month is May. Early morning is the best time to watch the migrants, which you can spot in your backyard or neighborhood park. Large areas with plenty of habitat draw the most birds, however. Since 1972, Trust for Public Land has worked with the U.S. Fish and Wildlife Service to conserve more than 369,000 acres across 71 national wildlife refuges in 33 states. That’s on top of more than three million acres of parks, forests, and trails we’ve created or protected during the same period.

Here are four birding destinations—from coastal Maine to the Mojave Desert—that we’ve had a hand in conserving. Don’t worry if you miss the current migration, which winds down in June. These parks and wildlife refuges have plenty of year-round residents too, from songbirds and shorebirds to hummingbirds and hawks. 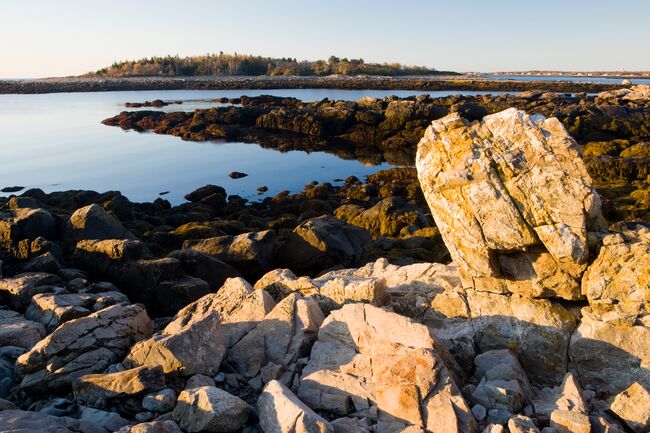 The songbird migration at the Rachel Carson National Wildlife Refuge starts in early spring. But the real fun happens in May. That’s when all manner of warblers, thrushes, vireos, and flycatchers show up at the sprawling refuge along a 50-mile stretch of coast in southern Maine.

One of the most beautiful sites in the preserve is Timber Point, an 86-acre peninsula 40 miles south of Portland that Trust for Public Land helped protect a decade ago. At various times of the year, the lollipop-like formation teems with songbirds, ducks, shorebirds, falcons, and hawks.

Timber Point’s diversity is its specialty, says Brad Woodward, a birder and retiree who describes the point as his office. “There’s a rocky cove that brings in shorebirds like ruddy turnstones and sandpipers and an estuary with ducks, geese, and egrets,” he said. “You have a swampy area with red-wing black birds and common yellowthroats, and finally a forest.”

That makes Timber Point a magnet for migrants on the Atlantic Flyway. “The absolute peak at Timber point is between May 20 and the 25,” Woodward said. “You go out and the trees can be dripping with warblers and other migrants.”

Some 270 species of birds have been recorded at Timber Point,  one of six additions to the refuge, totaling 300 acres, that Trust for Public Land has facilitated over the years. Betsy Cook, the organization’s Maine state director, said public access to the Maine coast, especially in the southern part of the state, is notoriously difficult.

“This plot was owned by a single family for 80 years,” Cook says.  “It’s now super accessible for a lot of people and offers a unique mix of important habitat and land for recreation right where people live.” 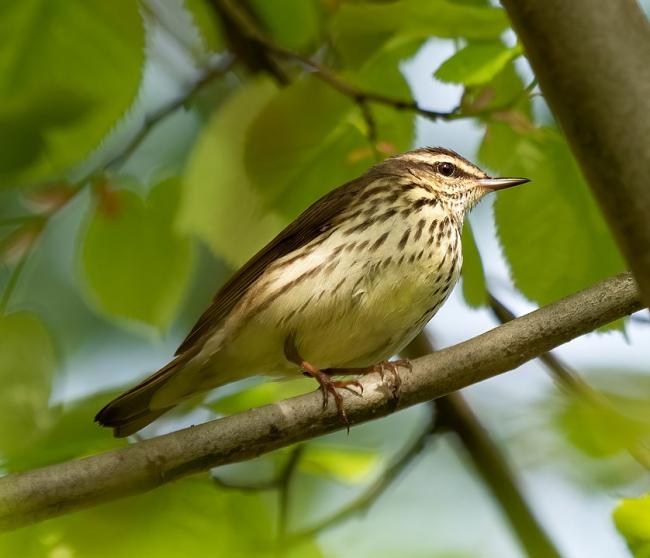 Northern waterthrushes are among the species birders can spot at Moore’s Bridge Park south of Atlanta. Photo : Rhododendrites

The Chattahoochee River slows to a crawl as it pushes south of Atlanta, cutting through farmland, meadows, and stands of tulip poplar and loblolly pine. “I guess you are technically still in the metro area, but when you are out there you don’t feel like you are in Atlanta,” said Adam Betuel, director of conservation at Georgia Audubon. “It feels more like the country.”

For the millions of migratory songbirds making their way north along the East Coast this month, it feels pretty rural too. Some of those migrants descend on Moore’s Bridge Park, a 485-acre green space along the Chattahoochee River 40 miles from downtown Atlanta.

In 2009, Trust for Public Land helped protect the land that would become Moore’s Bridge Park, which honors the prominent Black civil engineer Horace King. The park was the site of a bridge designed by King, which Union soldiers burned during the Civil War to thwart the Confederate Army.

Alongside its fascinating history, this time of year the park is a fine place to see migrating songbirds like northern waterthrushes, Cape May warblers, and Canada warblers. The woodlands, thickets, and the river itself draw breeding warblers too. “I would guarantee pine warblers are nesting there,” Betuel said, “and almost certainly common yellowthroats, hooded warblers, and northern parulas.”

One of Betuel’s favorite year-round residents is the brown-headed nuthatch, which lives among pines in the southeastern United States. “They are known to use tools by taking a piece of bark and using it to pry off tree bark to find food. And they sound like a squeaky dog toy,” he said. “It’s a really fun bird.” 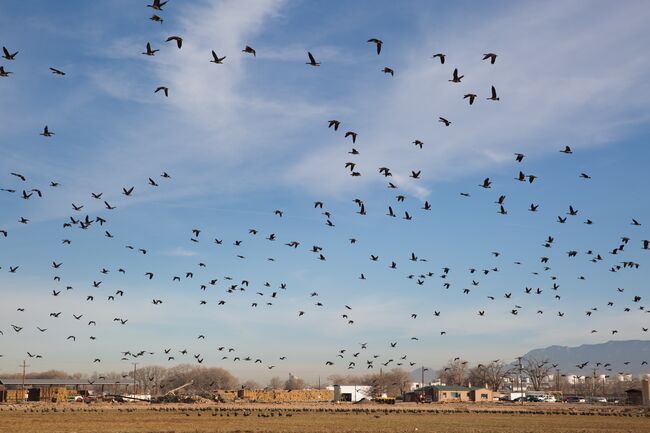 It lies in the shadow of Albuquerque, New Mexico, near an industrial stretch south of the city that doesn’t conjure migrating songbirds, let alone scenes of nature. But the state’s newest preserve, Valle de Oro National Wildlife Refuge, is attracting an impressive variety of bird life.

Trust for Public Land helped establish this 570-acre wildlife refuge in 2012. These days much of the land is fallow farm fields, but long-term plans call for a “mosaic of native habitats” typical of the Middle Rio Grande Valley, which will provide an oasis for both people and wildlife, said Jennifer Owen-White, the refuge’s manager.

In the meantime, the refuge is drawing birders who come for the Swainson’s hawks, western kingbirds, and northern rough-winged swallows in spring and summer; the northern harriers, horned larks, and Savannah sparrows in fall and winter; and American kestrels, greater roadrunners, and Say’s phoebes year-round.

The refuge unfolds east of the Rio Grande, just a few miles from Albuquerque’s city limits. It’s a mix of hayfields, desert , and bosque, a forest habitat that flourishes along rivers and streams in dry regions of the United States.

That might explain the diversity of birds—warblers, grassland birds, hummingbirds, ducks, and hawks—frequently seen there. In the first week of May this year, visitors logged 51 species, including Cooper’s hawk, western meadowlark, black-chinned hummingbird, summer tanager, wood duck, and Lucy’s warbler. 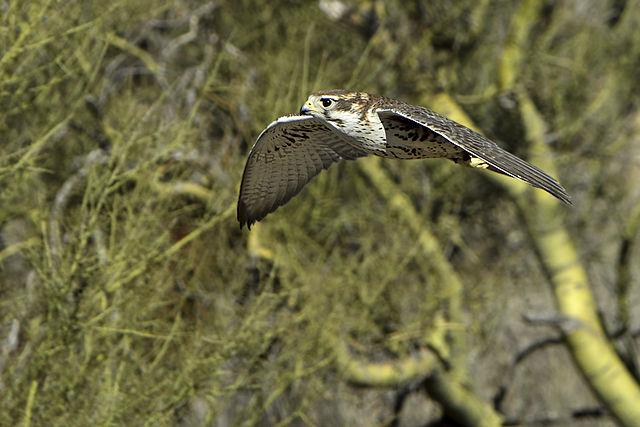 To fuel their amazingly long migrations, songbirds need food and water. When they are flying from South America through the arid landscapes of Southern California, water can be hard to come by. But two properties in the southern Sierra Nevada, Hanning Flat and Desert Springs, offer liquid sustenance.

Hanning Flat is a 3,806-acre property that Trust for Public Land helped protect last year. It features grasslands, streams, springs, canyons, and small mountains, all occupying the center of a broad band of protected lands northeast of Bakersfield. Twenty miles south lies Desert Springs, which, as its name suggests, is dotted with clear springs, around which green vegetation flourishes. In 2019, Trust for Public Land acquired eight separate springs totaling 1,415 acres and transferred the land to the Mojave Desert Land Trust.

“Hanning Flat and Desert Springs are part of an incredibly sensitive ecological region, and a transition zone from the Mojave Desert to the Southern Sierra Nevada Mountains,” said Alex Size, Southern California land protection director at Trust for Public Land. “Neotropical birds are flying north and stopping at these springs.”

In Desert Springs, there is good birding along the public roads that run through the area, particularly at Tunnel Spring off Kelso Valley Road in Weldon.

“Deserts Springs ties together all the places where there is water in the desert,” Tollefson said. “As birds come out of the tropics, they need to eat the insects around the springs. You can get western tanagers moving through these desert springs in large numbers, as well as blue grosbeaks, black-headed grosbeaks, and a half dozen species of warbler.”

It’s for the Birds! 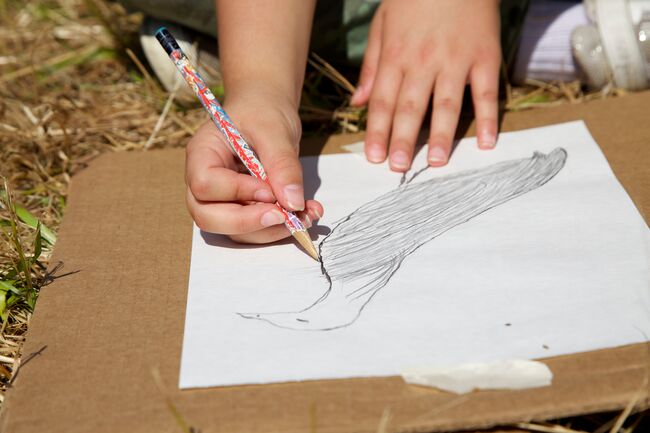 We’ve helped preserve important bird habitat across the country, creating opportunities for people of all ages to get to know, and love, their birds. Photo: Shasta Greiner

Even though songbirds have migrated for millennia, they face threats that have emerged in only the past century. Light pollution, pesticides, domesticated cats, and, above all, habitat loss have taken a toll. A 2019 study in the journal Science found that in the last fifty years, North America has lost more than a quarter of its bird population, representing about three billion birds.

Protecting wildlife habitat—from desert landscapes in the Southwest to grasslands in the Midwest to conifer forests in the Northeast—is key to preventing further losses. At Trust for Public Land, we have accelerated our own land conservation, committing to the protection of an additional one million acres by 2025. Your donations will fuel our work, so that we can fuel songbird migrations for millennia to come.