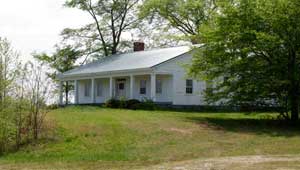 This 485-acre property buffers 1.4 miles of the Chattahoochee River and served for more than a century as the “gateway” to Carroll County. It was the site of an historically significant wooden covered bridge built by Horace King, an African American who was one of the most respected master bridge builders in the area in the mid-nineteenth century. In July 1864, Gen. William Tecumseh Sherman sent Major General George Stoneman to find a crossing over the Chattahoochee. An artillery battle ensued with the Confederate soldiers across the river, and although the Union troops were driven off, they set the bridge afire. This delayed the Battle of Atlanta for several days because Sherman refused to cross the river 40 miles upstream until he knew Stoneman had either secured or destroyed the bridge. TPL protected the property in 2009.