A new chapter for an ancient refuge in Hawai’i
By Trust for Public Land
Published August 22, 2019
Spread the Word

A new chapter for an ancient refuge in Hawai’i

The Waimea Valley has always been a place of refuge. Today, the lush canyon on the North Shore of O’ahu has a botanical garden and a shaded trail to a waterfall, offering visitors a change of pace from the busy, sun-drenched beaches of Waikiki. But hidden somewhere behind a wall of jungle near the parking lot, the valley holds the memories of a pivotal era in Hawaiian history: the final resting place of the islands’ last high priest, Hewahewa.

As the chief spiritual advisor to the king, Hewahewa was responsible for upholding kapu, a code of conduct that dictated a social and political class system and outlined behavioral taboos. “Kapu was the ‘who, what, when, where, and why’ of how everything got done in the islands,” says Kaulamealani Diamond, cultural programs manager at Hi’ipaka, LLC, the nonprofit that cares for Waimea Valley today. Under kapu, the verdant Waimea Valley was the exclusive domain of the priests, and off-limits to most other people. 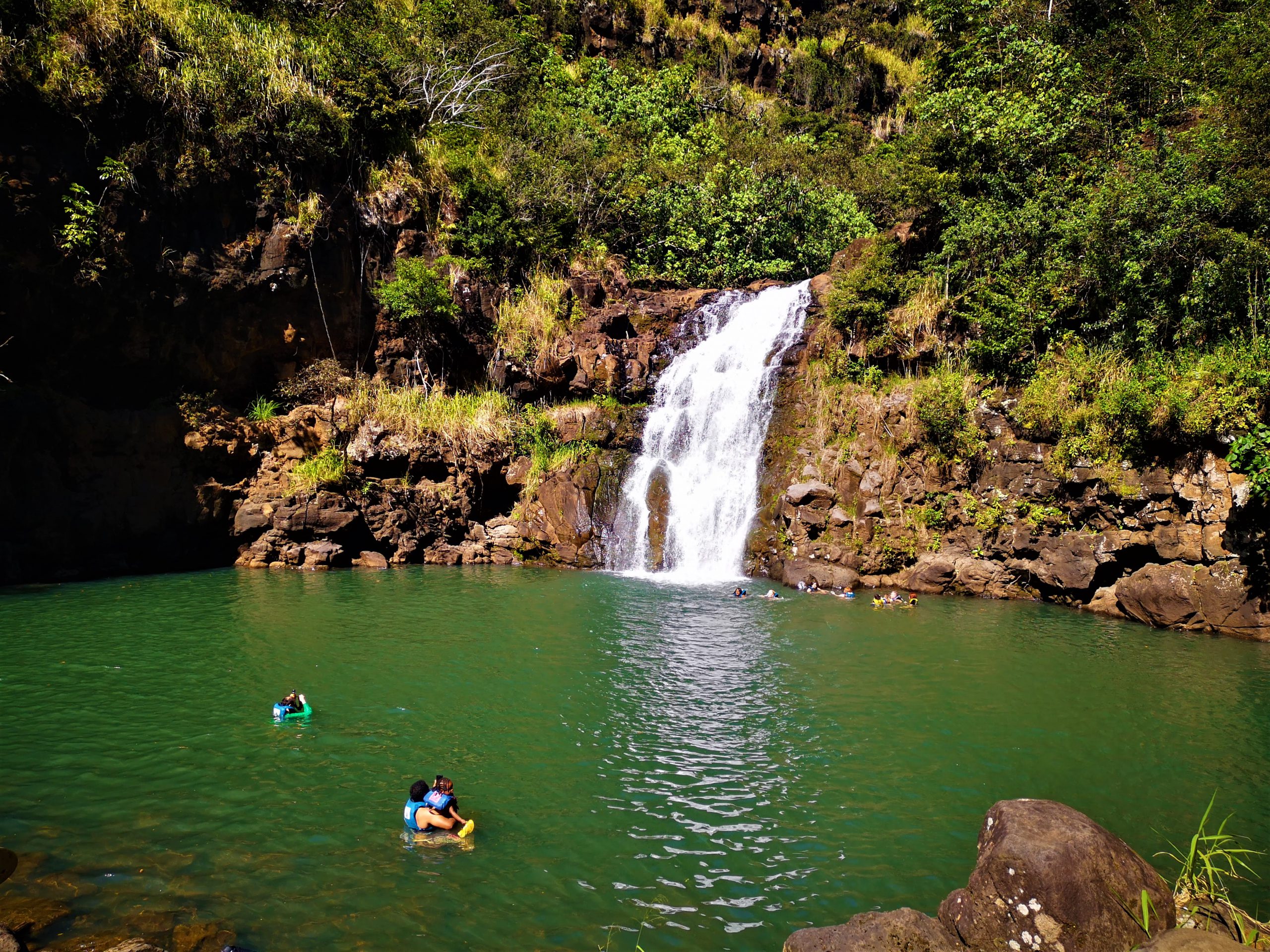 On the North Shore of O’ahu, the Waimea Valley has always been a place of peaceful refuge. These days, visitors come to hike through a botanical garden and swim at the big waterfall. Photo credit: Flickr user Jennifer C.

In 1810, King Kamehameha I unified the islands and established the sovereign Kingdom of Hawai’i, increasing trade and cultural exchange with other nations. After Kamehameha’s death, his chief spiritual advisor, Hewahewa, declared an end to the kapu system. “Hewahewa converted the Hawaiian people to Christianity,” says Diamond. “And in abolishing the kapu system, he abolished the traditional roles—including his own.” So today, Hewahewa is known as Hawai’i’s last high priest. Upon his death in 1837, he was laid to rest in the Waimea Valley.

Hewahewa’s burial ground is one of dozens of historical sites—including burial caves, shrines, and building foundations—that cultural practitioners and archaeologists have identified in Waimea. “This valley is a treasure trove of ancient sites,” says Diamond. “And on O’ahu especially, where so much is already built over, off limits, and lost forever, that makes this place extraordinarily valuable.” But until recently, these vital traces of life in ancient Hawai’i were at risk.

In the early 2000s, the Honolulu City Council approved plans for a subdivision on the valley floor. But the idea of developing this peaceful place, where Native Hawaiian cultural practitioners perform sacred rites, was deeply unpopular. Instead, in 2006, The Trust for Public Land helped protect over 1,800 acres—nearly the entire valley floor—and transfer it to Native Hawaiian management under Hi’ipaka, LLC, a nonprofit under the aegis of the State Office of Hawaiian Affairs.

In 2006, we helped transfer nearly all of the Waimea Valley floor to Native Hawaiian management. Hula dancers performed at a celebration marking this milestone.Photo credit: Suzanne Westerly

“For Native Hawaiians, land is really important to us,” says Diamond. “We are connected spiritually, emotionally and physically. It is very important that we’re able to hold on to whatever we have left, because so much has been taken from us. And a lot of families have suffered from a great disconnection from the land itself.”

The 2006 transaction was a new beginning for the Waimea Valley. Today visitors can learn about life in ancient Hawaii and swim at the waterfall. It’s also been the scene of big family reunions for Hewahewa’s descendants. “But until this year, we were missing an important piece of Waimea,” says Hiipaka Director Richard Pezzulo.

The Hale o Lono heiau (a temple to the god Lono) was originally built in the 1400s, and stands restored today to help Waimea visitors learn about life in ancient Hawai’i. Pu’ukua is directly behind the heiau.Photo credit: Hiipaka, LLC

That’s where the wall of jungle near the parking lot comes back into this story. It’s the edge of a 4-acre parcel that wasn’t included in the 2006 transaction, and has remained under private ownership since. According to Hewahewa’s descendants, this property, known as Pu’ukua, contains the site where the last high priest was laid to rest.

A few years ago, Pu’ukua’s owners decided to sell. “There were a lot of potential buyers with hopes of building a private home on this property,” says Lea Hong, Hawai’i State Director with The Trust for Public Land. But Hewahewa’s descendants, anxious that development would affect their ancestor’s burial place, hoped Hi’ipaka would acquire it instead. Eventually, the seller agreed.

The Trust for Public Land purchased Pu’ukua on short notice in 2017, and held the property while we helped Hi’ipaka raise the funds it needed to buy the land. In a ceremony earlier this year, we gathered with Hewahewa’s descendants for a blessing ceremony as Pu’ukua was transferred Hi’ipaka’s care. 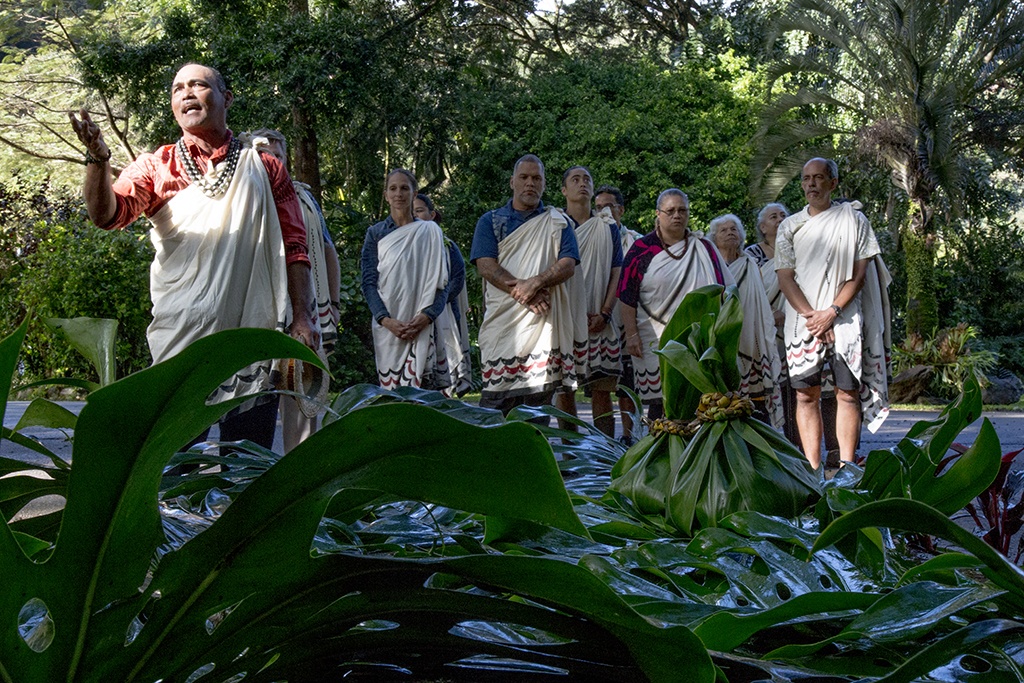 “Until this year, we were missing an important piece of Waimea,” says Hi’ipaka Director Richard Pezzulo. This spring, we celebrated the permanent conservation of Pu’ukua, the last unprotected part of the valley floor. Photo credit: Hiipaka, LLC

Now Hi’ipaka is working closely with Hewahewa’s descendants on a plan for the future of Pu’ukua. There’s talk of restoring native forest and building an open-air classroom. The location of Hewahewa’s burial will remain concealed, known only to his descendants.  “Now we can properly protect this land, and pay it the proper respects, and follow the proper protocol,” says Diamond. “If it weren’t for The Trust for Public Land, it never could have been done.”

“If I keep going, I’m going to cry! So I’ll stop,” says Diamond. “I’ll just say it’s an honor to protect this place and share it with the world.”