Years of hard work, hands and feet in the mud, a bold vision, and a dedicated community ultimately led to the protection of this cultural treasure.

Cradled in a bend on the Hulēʻia River in the southeast corner of Kauaʻi, an ancient fishpond built 600 years ago ripples and glints in the sun.

This body of water holds a special place in Hawaiian culture. Legend has it the brackish manmade fishpond—one of the most significant examples of early aquaculture on Kauaʻi—was built by Menehune, expert craftspeople who were Hawaiʻi’s earliest inhabitants.

In 1973, Alakoko Fishpond was listed on the National Register of Historic Places. In 2009, it was designated one of Hawaiʻi’s most endangered historic places by Historic Hawaiʻi Foundation, selected for its vulnerability to environmental degradation and development.

Now this remarkable feat of engineering, which for centuries provided this island with a reliable food source, will be protected from development for generations to come. In November 2021, we purchased the 102-acre property and turned it over to Mālama Hulē‘ia, a local nonprofit that has worked alongside the community to restore it. The property was listed for sale in January, triggering a wave of concern among community residents who worried about the fishpond’s fate. A petition calling for its protection drew 5,500 signatures.

Ringed by mountains, Alakoko, which is also known as the Menehune Fishpond, was constructed using a 2,700-foot-long stone and earthen wall that cuts off a bend in the Hulēʻia River. Today, the pond is nestled alongside the river, a major waterway in the Nawiliwili Bay Watershed. For centuries, the pond served as an all-important nursery for fish, seaweed, and other seafood and a source of sustenance for residents of the island. It is also a testament to the Native Hawaiian practice of sustainably managing land and water. But after the 1920s, the fishpond began to suffer from neglect. Invasive mangrove, introduced to the islands in the early 1900s to stabilize the coastline, had crowded out native vegetation to devasting effect, and sediment had piled up, shrinking the area of open water.

Mālama Hulē‘ia now owns and manages the property. The nonprofit took a huge risk when it gained access to the fishpond in 2018 through a terminable license agreement with the prior landowner. The organization was founded by outrigger canoe paddlers in response to the river becoming so choked with mangrove that they could barely turn their canoes in it. Since then, it has enlisted thousands of volunteers to remove highly invasive red mangroves on 26 acres. The mangroves, the roots of which grow under water, can present a nearly impenetrable forest. Removing them is both laborious and painstaking. The plan is to eventually eradicate the mangroves throughout the watershed and restore the fishpond as close to its original state as possible so that it can feed this community again, physically, mentally, and spiritually. 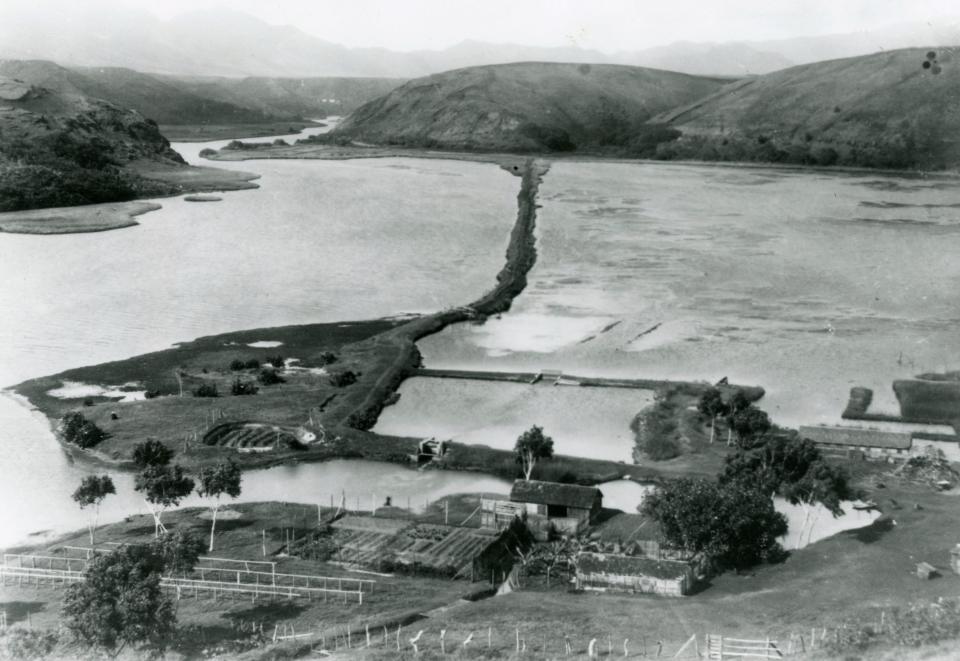 Mālama Hulē‘ia has also worked with local educators to develop a curriculum so that schoolchildren, hundreds of whom have visited the fishpond on field trips, can continue to learn about the beloved site and “aloha ʻāina,” or “love of the land,” a mindset that informs so much of Hawaiians’ care for and reverence of nature.

That respect for land and water underpinned the historic creation of fishponds. For centuries fishponds were a critical part of the Hawaiian food production network, and hundreds of them dotted the islands that now make up the state. Beginning around 1200 A.D., Hawaiians developed a sophisticated system of aquaculture in which the ponds functioned as nurseries—trapping fish from rivers and the sea and allowing them to grow to maturity with a rich, all-natural diet of phytoplankton and algae. Before European colonization, studies show, fishponds fed a population of up to a million people across the Hawaiian Islands. But in modern times, many ponds in Hawaiʻi were destroyed by development pressures. 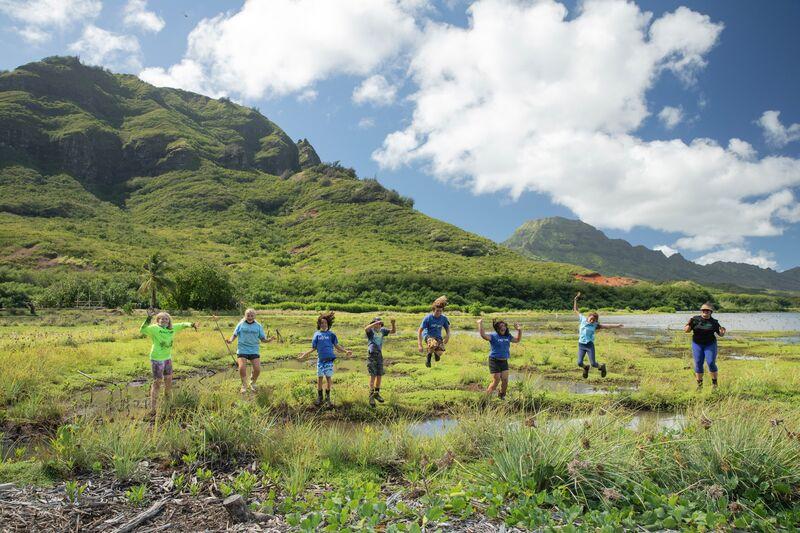 Not just a food source, the fishpond is also an outdoor classroom.

“Before zoning, a lot of fishponds were filled in and developed,” said Reyna Ramolete Hayashi, our Aloha ʻĀina project manager.

“Whole residential communities, hotels, and military bases were built on fishponds,” she said. “The waters of Puʻuloa (Pearl Harbor) and Waikīkī used to be full of fishponds producing tens of thousands of pounds of fish each year. Those that remain are real treasures. There’s so much potential for them to sustain us again, given that Hawaiʻi imports 85 to 90 percent of our food.”

In addition to running education programs, Mālama Hulē‘ia plans to return the fishpond on Kauaʻi to its historic role as a viable outdoor classroom and food source for the community. That will involve using traditional Hawaiian knowledge to repair and stabilize the pond’s stone wall, restoring the habitat so native fish and plants return and thrive, improving water quality and circulation, and developing a master plan with community input.

To steward Alakoko Fishpond in the future, Mālama Hulē‘ia estimates it will need to raise $4 million over the next five years. That is why, together with the nonprofit, we announced a new fundraising campaign to help pay for restoration and maintenance of the fishpond and education programs. 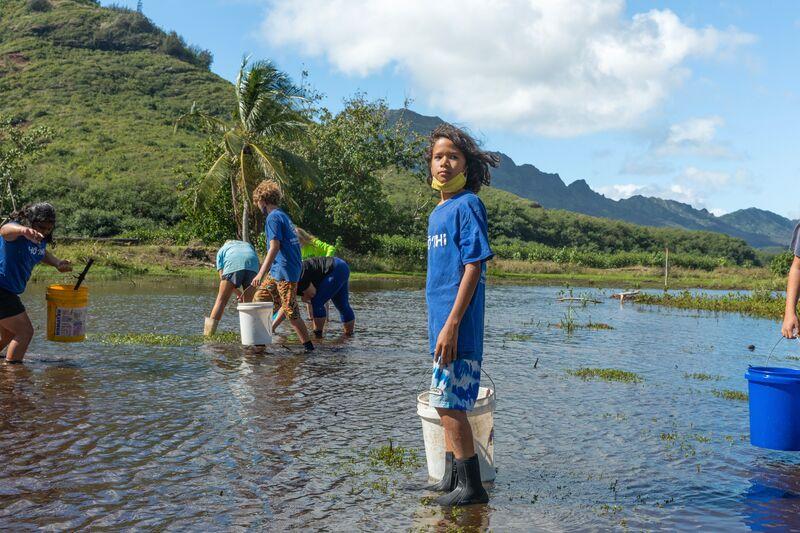 One of the biggest tasks will be removing the remaining acres of red mangrove throughout the watershed. The highly invasive aquatic plant harms water quality by depositing huge amounts of organic matter, which in turn leads to nutrient loading and reduced oxygen levels. Mangroves also push out native vegetation, destroy nesting sites for native shorebirds make shorelines inaccessible due to the dense network of roots and branches.

In the case of Alakoko Fishpond, the mangroves have also damaged the stone wall critical to the pond’s integrity.

Hawaiʻi has so many other invasive plants that once we clear the mangrove, we have to continue the work of making sure we’re getting balance back by planting native species,” said Sara Bowen, executive director of Mālama Hulē‘ia. “Then the fishery will start to transition to a more native fish population rather than the invasive fish that thrive in that invasive mangrove system.”

Eliminating the mangroves involves a combination of techniques, Bowen explained. Some areas are cleared with machines; others are cleared with chainsaws. But in more sensitive spots, volunteers and students use hand tools. “It spreads via propagules, which are seed pods that drop off the trees,” she said. “It is so invasive because each tree can produce thousands of propagules. Hawaiʻi doesn’t have any predators to get rid of them like in other parts of the world where mangroves are protected.” 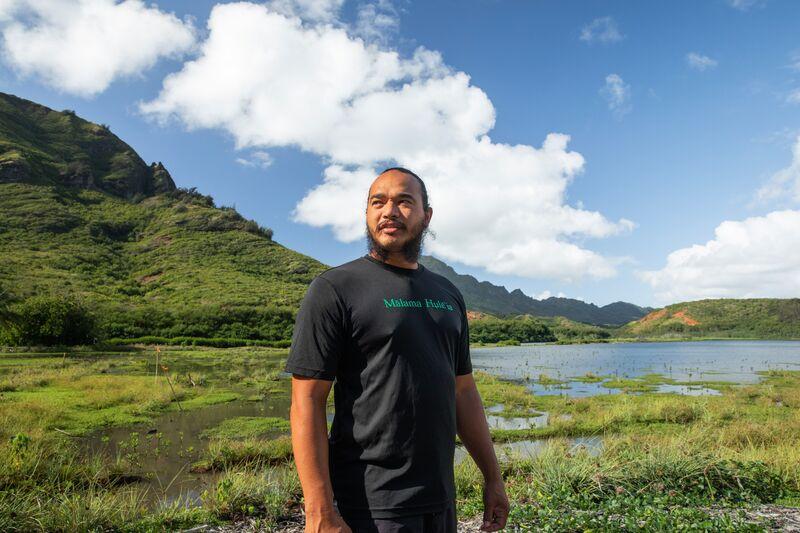 Peleke Flores is the director of operations for the nonprofit organization Mālama Hulē‘ia.

For Peleke Flores, director of operations for Mālama Hulē‘ia, the restoration of Alakoko Fishpond is about much more than propagules or fish. It’s about a working landscape and the connection between today’s residents and the ancestors who cultivated the Hulēʻia River, one of the few navigable rivers on the island, in a way that harmonized with nature. The fishpond itself connects freshwater springs and streams with the saltwater of the ocean.

“Healthy fishponds are bioindicators of healthy ahupuaʻa systems,” he said, alluding to the traditional geological subdivisions in Hawaiʻi that historically connected the freshwater from the mountains to the lands at sea level. “If that is in balance, then everything should be nice and fruitful.”

“Most of the younger generation nowadays do not eat these kinds of fish anymore,” Flores said. “They’re used to salmon, tuna, whatever the big pelagic fishes are off in the deep ocean or from other parts of the world. The main fish grown in the pond are ʻamaʻama [mullet], awa [milkfish], and herbivorous fish, as well as limu, oysters, and crabs. We need to build these tastes back in, to get it into their meals so they can taste it, hear the names, and know about their own history and the healthy habits of our ancestors.” 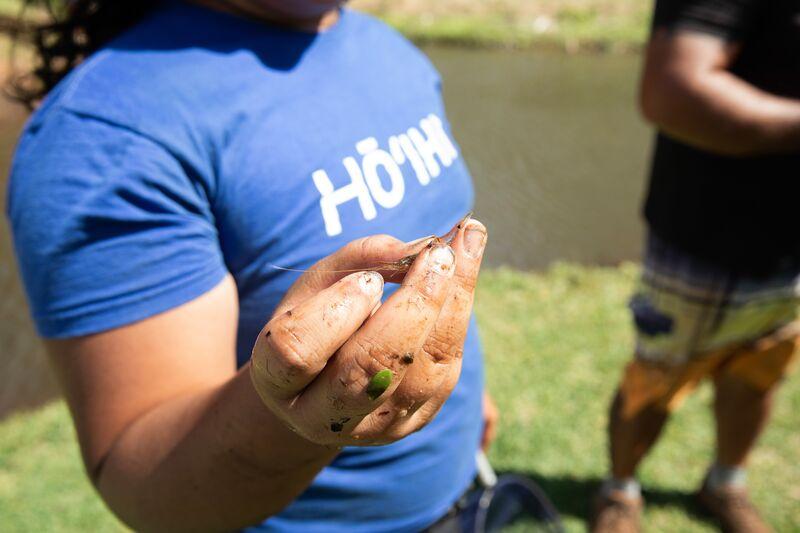 There is a Hawaiian proverb, “I ka wā ma mua, ka wā ma hope,” which means “The future is in the past.”

Those words resonate with Ramolete Hayashi, with Trust for Public Land. The traditions surrounding fishponds, she says, hold important lessons.

“Indigenous lifeways have a lot to teach us about how we can address modern-day problems and live sustainably,” Ramolete Hayashi observed. “We’ve made a lot of mistakes—introducing mangroves as a one-size-fits-all solution, building military bases and tourist destinations over fishponds, teaching science and math from books in a four-walled classroom.”

“The solutions are here,” she continued. “They are homegrown and grounded in Native Hawaiian worldviews and technologies. They spring from a deep love for and intimacy with the land. Care for it as a relative, and it will care for you in return.”

Lisa W. Foderaro is a senior writer and researcher for Trust for Public Land. Previously, she was a reporter for The New York Times, where she covered parks and the environment.