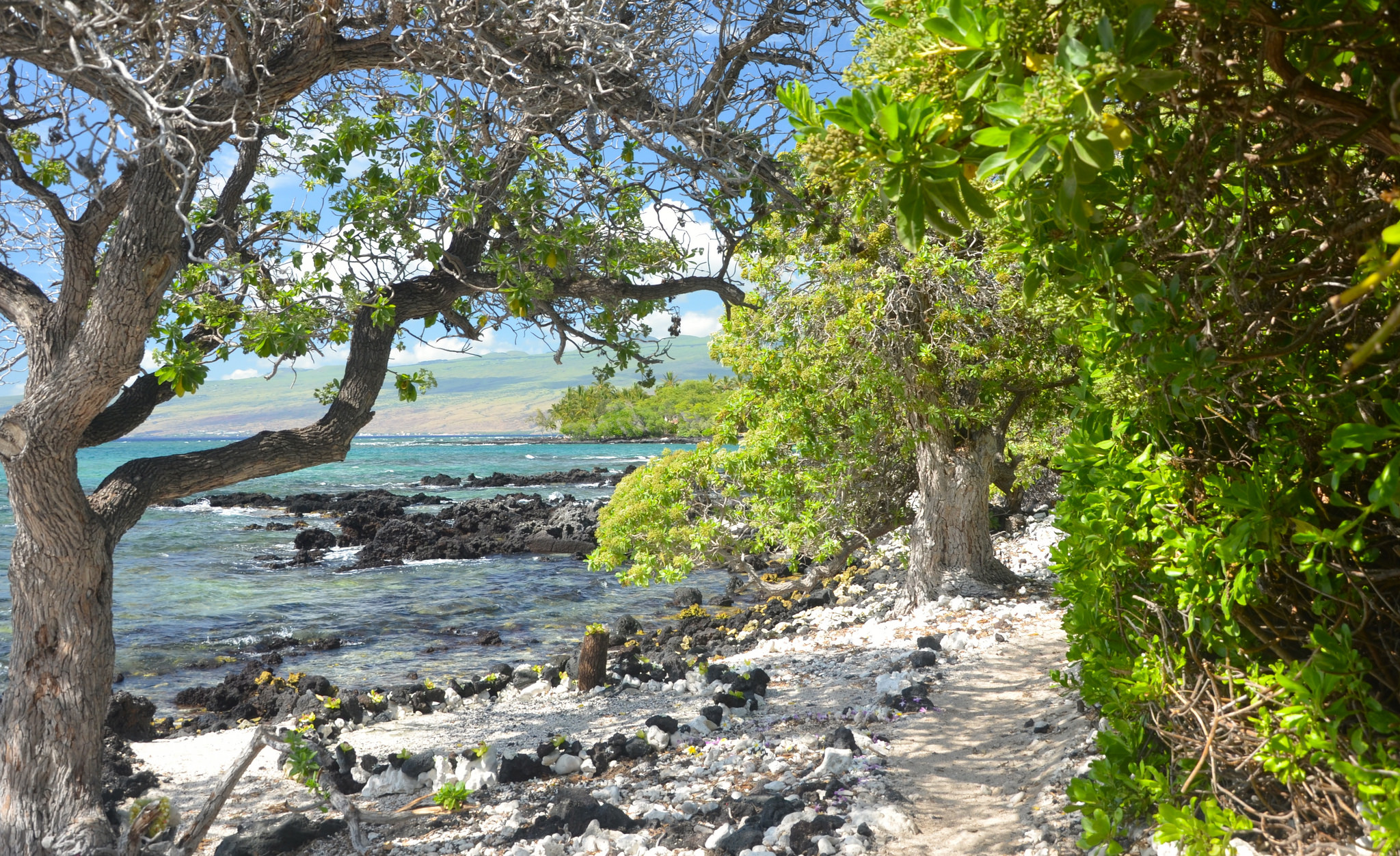 In Hawaii, volunteers carve out a future for a trail to the past
By Trust for Public Land
Published December 21, 2016
Spread the Word

In Hawaii, volunteers carve out a future for a trail to the past

One evening, years ago, Dennis Hart’s mother told him that she wanted to go for a hike.

She was in her 80s then, her health unsteady, but she had an important destination in mind: the remnants of the ancient Hawaiian villages of Kauleoli and Ki’ilae. As a young girl, she’d spent seasons visiting her great-grandfather at these remote settlements on Hawaii Island, where native families harvested fish from the sea and grew fruits and vegetables in the upland hills. She was determined to pay one last visit.

“She asked my dad to take her first,” Hart remembers, “but he said no, she was too frail. So she called me instead and I said, ‘Sure, come on over, we’ll go.”

They moved slowly over the trail’s rough, close-set cobbles. As they walked, Hart’s mother pointed out sites along the way—rock foundations, yards overgrown with invasive brush, even gravesites—and told him stories from her childhood. “She explained what it looked like, what life was like when she was growing up there—stuff I never knew, and never would have known if I hadn’t gone with her that day,” Hart says.

When Hart and his mother reached Ki’ilae that evening, he spread out a blanket at a spot overlooking the rocky coastline so they could rest. To his surprise, Hart’s mother started to cry. “Really crying,” he recalls, “in the old Hawaiian style, where you pound on your chest and say ‘Uwe, uwe’ which means, ‘the hurt, the hurt.’ I’d never seen her do that before.”

“She started speaking in rapid Hawaiian—I had to slow her down because I’m not fluent like her. She told me, ‘Boy, you need to take care of this place, because all of our family is buried here in Ki’ilae and Kauleoli, and you need to make sure they’re safe from the bulldozers.’” 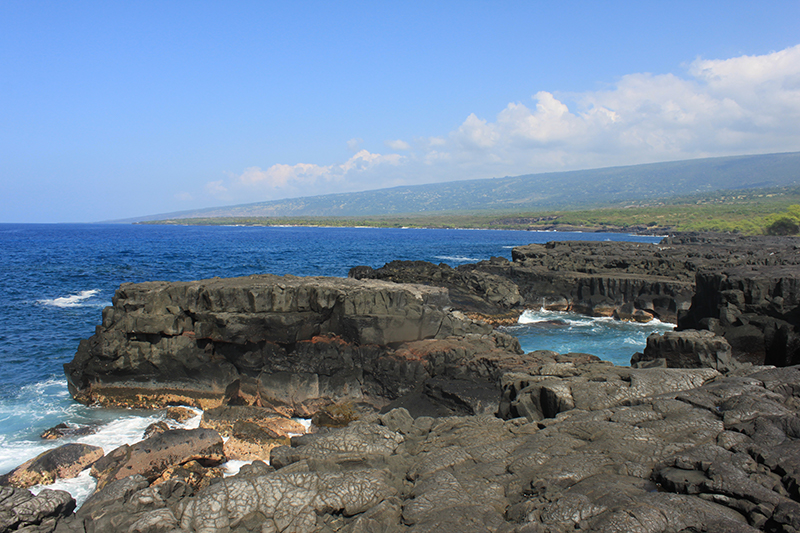 Kauleoli is more than a beautiful spot on the Kona Coast: it’s rich in Hawaiian heritage and history.Photo credit: The Trust for Public Land

The trail that Hart and his mother walked that day is part of a 2,000-year-old, 290-mile footpath that once circled the entire island, linking settlements along the coast. Locals call it the Alaloa (the Long Trail), and at one time, each of the major Hawaiian islands had its own. Today, the National Park Service protects a 175-mile stretch on the Big Island known as the Ala Kahakai National Historic Trail (Ala Kahakai means “Coastal Trail”).

A law dating from 1892 says that the historic trail is open to anyone. But when Hart and his mother visited Ki’ilae and Kauleoli together in the early 2000s, many landowners weren’t aware of the law, or chose to ignore it. As a result, much of the trail through South Kona was overgrown, eroded, and blocked by locked gates and “No Trespassing” signs. Meanwhile, real estate developers were buying up land adjacent to the trail.

Following their trek—and with his mother’s wishes on his mind—Hart joined a small group of locals who hike the Ala Kahakai weekly to clear brush, reset stones, and rebuild crumbling walls. Along the way, they talk with landowners, law enforcement, and the Native Hawaiian community about public access to the trail. “At first I met with a lot of suspicion,” Hart says. “People were even telling me I could get arrested for walking out there. But the more we talk with landowners and community members, the easier it gets and the more awareness and interest we raise.” 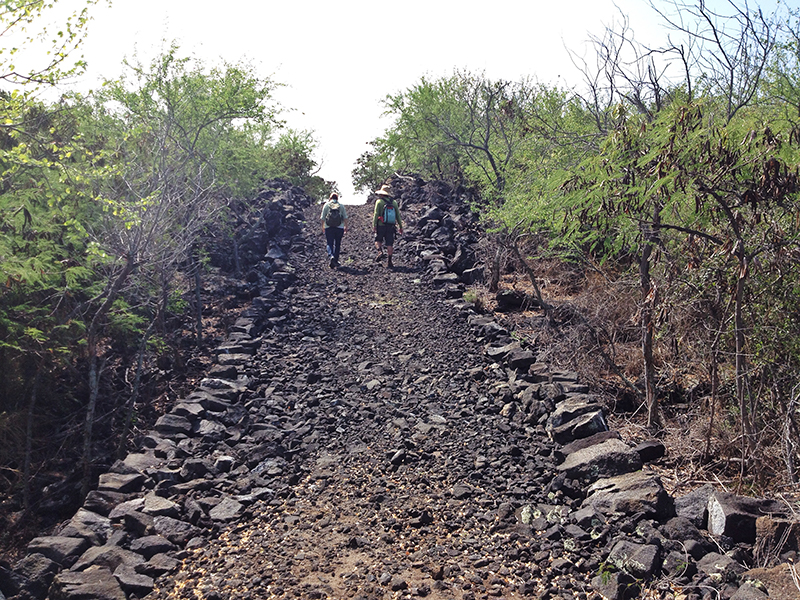 The Ala Kahakai National Historic Trail works to preserve a 175-mile stretch of a footpath that once circled the entire island.Photo credit: The Trust for Public Land

These days, Hart serves as president of the Ala Kahakai Trail Association, leading crews of volunteers that often include students from nearby schools. One told Hart that working on the trail makes him feel like he’s working alongside his great-grandfather, who lived nearby. “He says he gets goosebumps being out there—and he doesn’t get that feeling anywhere else except on that trail.”

“For us Hawaiians, in a way, it’s a duty to be out here clearing trail and visiting these ancient sites,” Hart says. “Our spirituality comes through a connection with our ancestors, and it’s closely tied to the places where they lived and where their bones rest.” But Hart is equally touched by the dedication of fellow volunteers who didn’t grow up in Hawaiian families. “It’s amazing to me—they may not be Native Hawaiian, but they have the same passion for saving what’s at risk of being destroyed, the same love for the land that we have.”

As the Kona Coast faces rising demand for development—especially luxury second-homes—the Ala Kahakai needs all the love it can get. The Trust for Public Land’s Laura Kaakua says she takes heart from the memories of Hawaiian elders who remember firsthand how the trail used to be. “They tell us, in the old days, you’d look out for rocks that weren’t in place and fix them so the next person on the trail wouldn’t get hurt,” Kaakua says. “If you ran across somebody walking, you’d stop and chat with with them. The trail was part of the fabric of the community.” 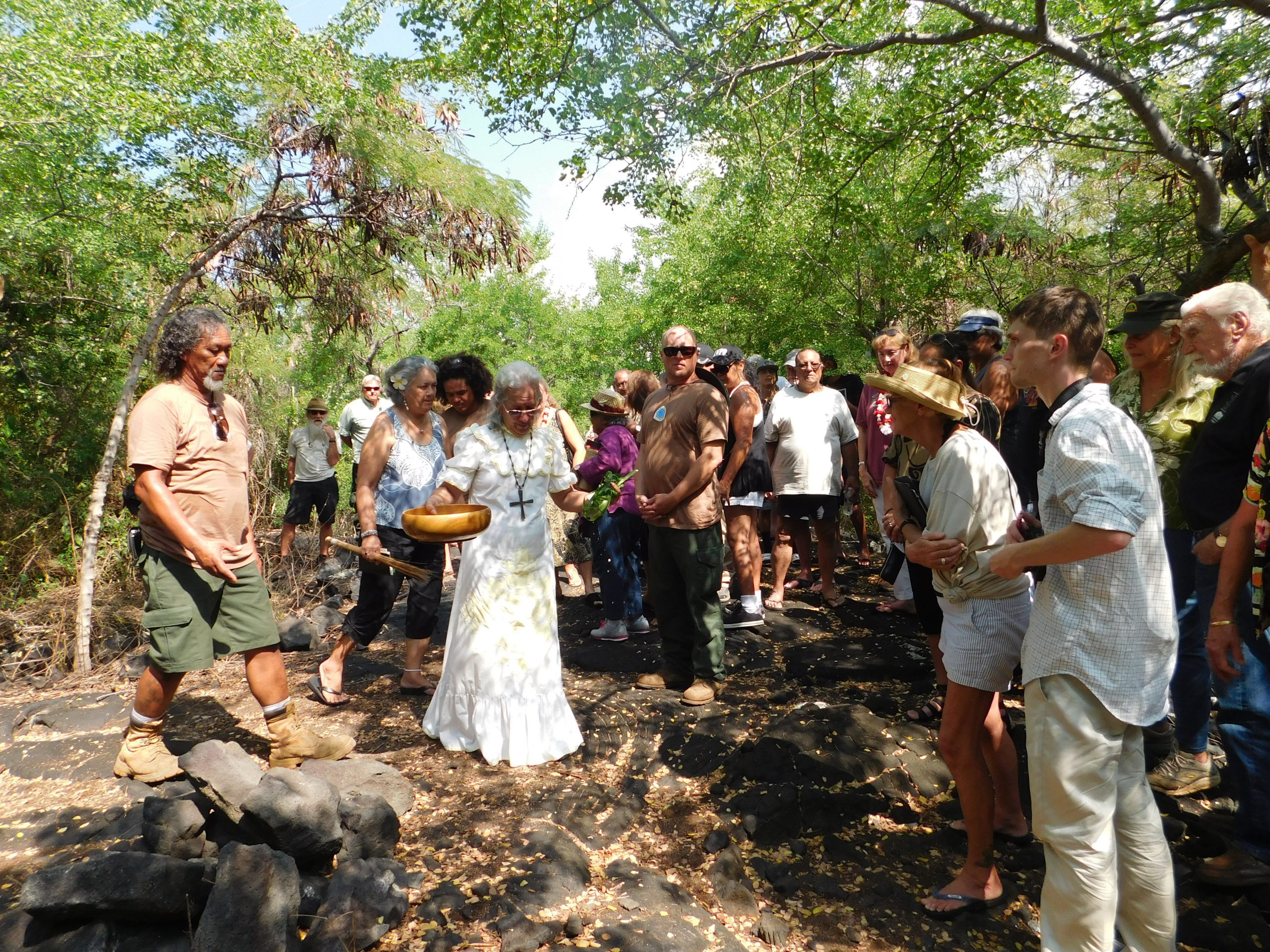 Nancietta Haalilo is a kahu, or pastor, who presided over a ceremony to bless Kauleoli in October.Photo credit: Kaleo Paik, Ala Kahakai Trail Association

Thanks to the dedication of community members like Hart, there’s hope some of that fabric will survive even as the island changes. “When we’re out there and it’s hot and we’ve been slashing brush for hours, I start to ask myself, ‘Who even appreciates this?’” Hart says. “But more and more we’re seeing families out walking the trail, and fishermen carrying their nets and coolers down to the beach.” He remembers a group that stopped his trail crew and thanked them for the work they were doing. “One had his little grandson and was showing him where his own grandfather and father used to cast their nets.”

The Trust for Public Land has worked closely with Hawaiian descendants like Hart and with the National Park Service to protect land along the trail. In 2006, we helped the Park Service expand Pu’uhonua o Honaunau National Historic Park to include the footprint of the fishing village at Ki’ilae and a stretch of the old footpath. This year, we added more than 50 acres along the coast at Kauleoli to the Ala Kahakai National Historic Trail, protecting hundreds of Native Hawaiian sites and artifacts like traditional drystack masonry homes, a canoe shed, heritage agriculture areas, and salt-making ponds.

For Hart and the volunteers he works with, this ongoing work to protect and revive sites along the Ala Kahakai is an expression of Hawaiian identity. “For many years, pride was hard to come by in the Hawaiian community. We were looked down on, and we’ve suffered losses,” says Hart. “But what we’re doing now—be it clearing the trail, or using the land for traditional cultural practices, or just going out to visit our ancestors—it brings back a lot of pride. It reminds us that our people can do great things.”