An artist returns to the school where her dreams took wing
By Trust for Public Land
Published October 24, 2017
Spread the Word

An artist returns to the school where her dreams took wing

Falcons have captured the human imagination for thousands of years: they’re a potent symbol in ancient myths—and for present-day sports teams. At Lafayette Street School in Newark, New Jersey, the falcon is a mascot and a source of inspiration. “Falcons rise and soar, and they’re strong and confident,” says Principal Maria Merlo. “They represent what we teach our students to be.”

So when artist Gera Lozano was asked to create a mural to grace the school’s new playground—in progress with help from The Trust for Public Land—a falcon design was a natural choice. Today, Lozano is a rising star in the world of street art, traveling the globe to create intricate, richly colored murals. But it wasn’t so long ago that she was a student at Lafayette Street School—wishing, at times, that she had wings of her own.

When Lozano was nine, her family moved from Peru to the Ironbound district of Newark, a dense, diverse neighborhood along the Passaic River. “Initially, I had a hard time as an immigrant child,” Lozano says. “In those days, the Ironbound was kind of a tough neighborhood, and I missed my home back in Peru.” She remembers getting picked on and struggling to fit in.

But it was also at Lafayette Street School that Lozano was first encouraged to consider a future in the arts. “We were learning to use watercolors in Mr. McMahon’s class,” she remembers. “When I turned in my painting, he was pretty blown away. He said, ‘Geraldine, you know you’re an artist, right? You have to keep making art.’ So I call him my first angel.” 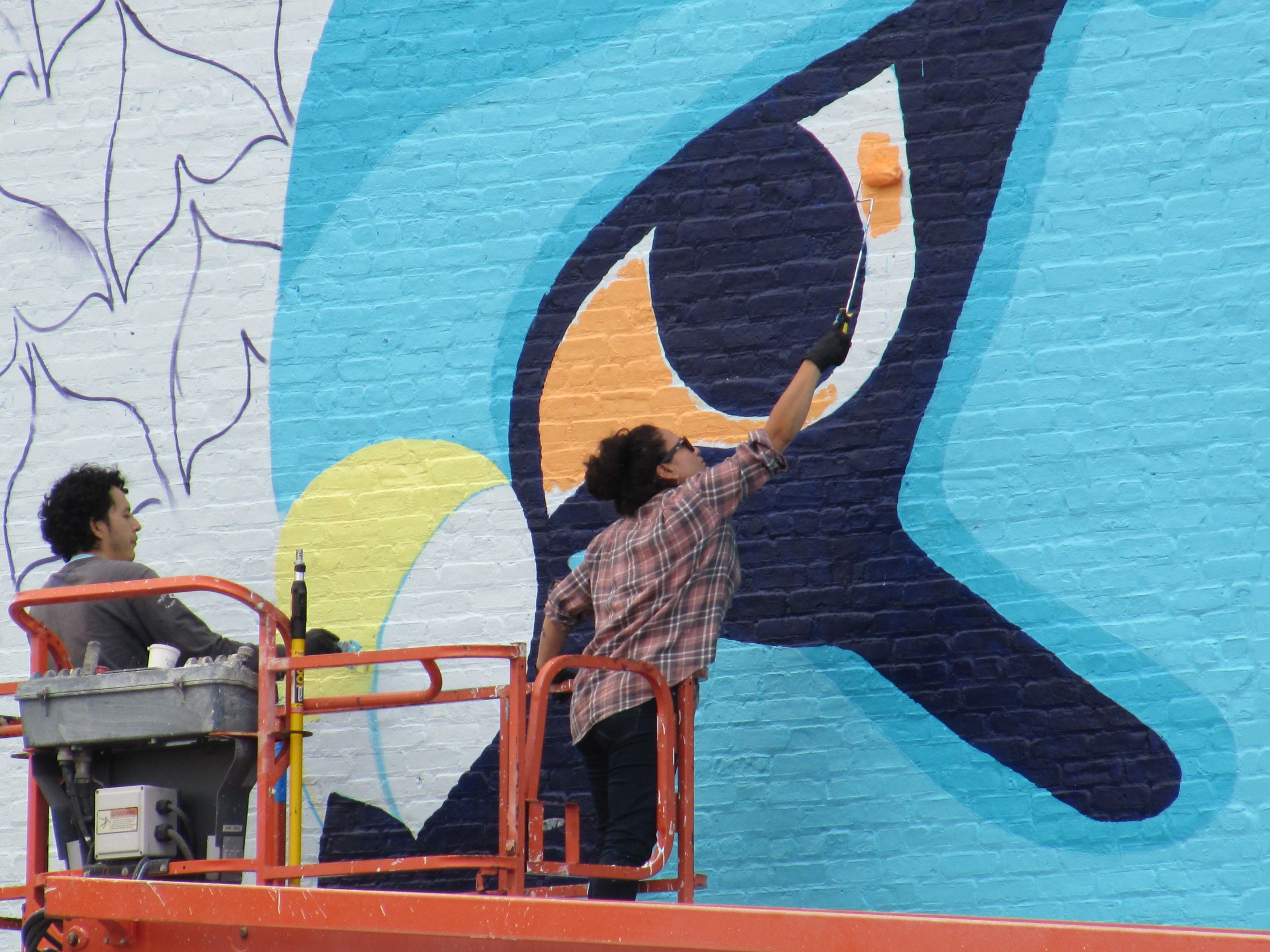 But it would be years before the fledgling idea would mature into a career path. “My parents had different expectations for me—I grew up knowing that I was supposed to be a doctor or a lawyer, to make the most of the opportunities they had put in reach for me,” says Lozano. She kept art on the back burner through middle school and high school, and entered college on track to become a psychologist.

She was a freshman at Hunter College in New York on September 11, 2001. “When 9/11 happened, the tragedy of it woke me up,” she says. “I said, ‘Why in the world am I living someone else’s dream? Life is too short—I am not going to die without trying to follow my passions.”

Today Lozano—who goes by GERALUZ—is known for her public art: works that appear on city streets and walls, accessible to all. The City of Newark commissioned her for a mural on a highway overpass a few blocks away from Layfette Street School. When she got a call asking if she was interested in creating a mural for the new playground, too, she jumped at the chance.

Founded in 1848, Lafayette Street School is the oldest continuously operating primary school in New Jersey. “The Ironbound neighborhood  and Lafayette Street School have been home for generations of immigrant families, and that remains the case to this day,” says Principal Maria Merlo, noting that nearly a quarter of students at the school are English language learners. But the plain asphalt schoolyard didn’t match the vibrancy and welcoming culture Merlo sees the school community. Crowded with parked cars and modular classrooms, it wasn’t much fun to play in, either. 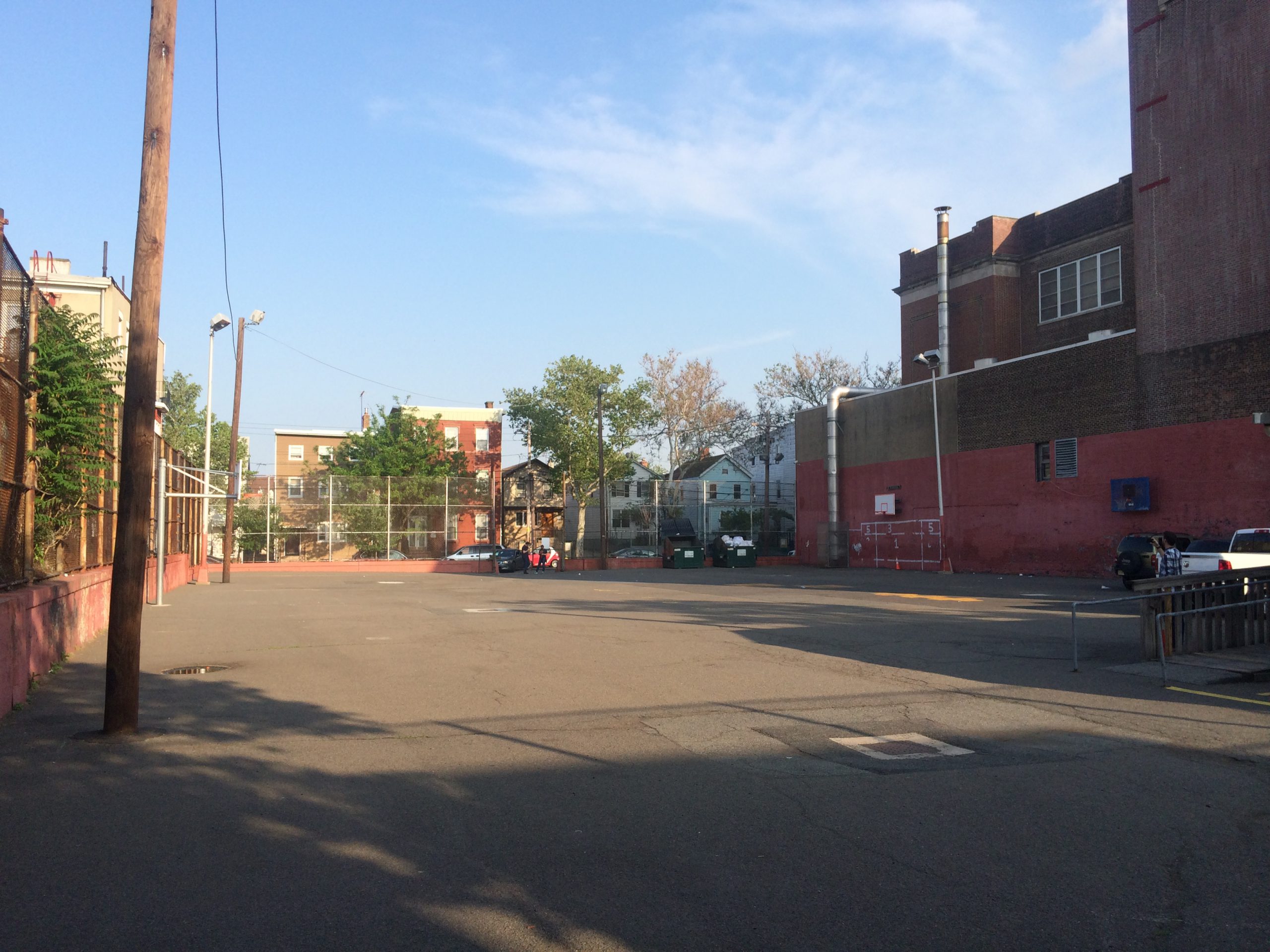 Before the new playground took flight, the schoolyard at Lafayette Street School was a bare asphalt expanse.Photo credit: The Trust for Public Land

City Councilman Augusto Amador, who represents the Ironbound district, helped start a fundraising campaign to raise money for a new playground and connected the school community with The Trust for Public Land. “The Trust for Public Land’s involvement raised the credibility of this whole project immensely,” says Councilman Amador. “The community is amazed to see the changes we’ve accomplished together—to the extent that now I’m hearing calls from other schools in my district that they want new playgrounds, too. It’s a good problem to have!”

When it opens next month, the new playground at Lafayette Street School will have trees, gardens, a jungle gym, sport courts, space for outdoor learning, and a running track. It will be open to the neighborhood after school and on weekends, offering much-needed green space within a 10-minute walk of 13,600 people.

And watching over it all—on what was once a featureless brick façade—will be the mural of a swooping falcon. Lozano designed it after studying dozens of student drawings, and hopes the image will serve as a daily reminder to kids to dream big. Certainly, she says, it would have inspired her. “Even if I didn’t want to be an artist, just knowing that someone from my school had gone on to an established career doing what they loved, and then came back and shared that with their neighborhood—how could you not be inspired by that?”

06 / 10
Campbell Soup Company on parks in their hometown

10 / 10
When private golf courses land in the rough, communities tee up public parks