Stories
Urban Trails Are Part of the Climate Change Solution

There is a stand of quaking aspens hovering over Drake Avenue in Northeast Chicago. OK, it’s not hovering; the trees are planted there, flanking part of an elevated trail that connects 2.7 miles of natural beauty in a city of nearly 3 million people.

Runners pad upon blue rubberized strips that are easy on joints; families meander with strollers in tow; commuters with businesslike panniers make their way to and from work. And for one stretch, the aspens’ thin white trunks add clean vertical lines, spade-shaped leaves flutter in the breeze, mimicking the sound of a stream, and passersby enjoy a calm respite.

This is The 606. It’s one of many Trust for Public Land urban trail projects, and—in ways you might not readily imagine—it’s working to fight climate change. “The theory is somewhat simple,” explains TPL Trails Initiative Director J.T. Horn. “Instead of moving around a city in a car, you can move around a city on a bike or on foot. If you have a well-designed trail system, you avoid the greenhouse gas emissions related to traditional transportation,” e.g., cars. 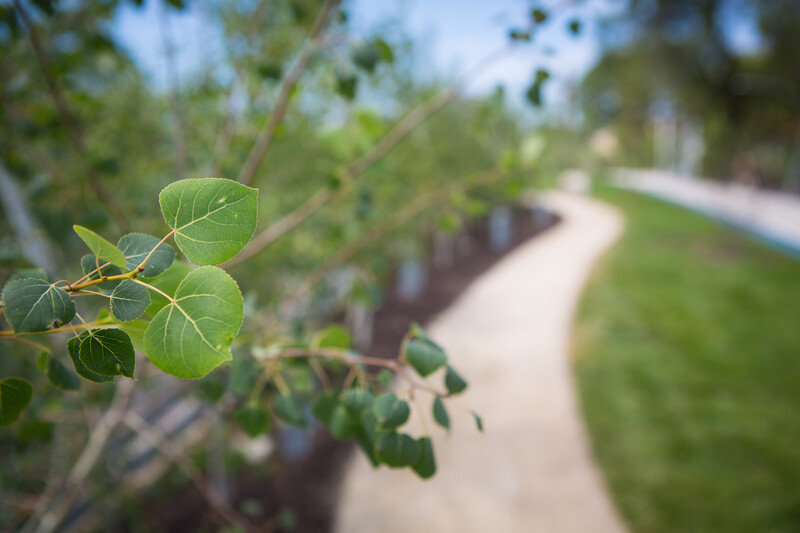 Aspen trees line a particularly memorable section of The 606, an urban trail that helps residents traverse Chicago by means other than car. Photo: © Adam Alexander Photography 2015

Think of it this way: according to the EPA, the transportation sector accounts for 29 percent of greenhouse gas emissions, which are one of the primary contributors to climate change. Personal vehicles make up more than half of those emissions. Remember how L.A.’s smog problem virtually disappeared when people stopped or reduced commuting due to COVID-related stay-at-home orders? That’s visual proof of what ceasing driving can do.

The Intergovernmental Panel on Climate Change reports that “lower-carbon transport systems—encouraged by increasing investment in public transport, walking, and cycling infrastructure” offer high mitigation potential against climate change. In other words, changing the way we get from place to place can have a profound impact on the emissions we produce (or don’t).

Trust for Public Land’s urban trails are helping to create lower-carbon transportation options across the U.S., from Florida’s Gulf Coast to Richmond, California, and many points between. Not only do urban trails offer alternate ways to get to work, school, shopping districts, and leisure and entertainment activities, they also provide opportunities for exercise and access to nature, which is proven to have important mental health benefits. They save money on gas, and they add green space, thereby improving air quality and reducing surface temperatures in urban areas (which are typically higher than surrounding areas, also known as the heat island effect).

“A great trail serves all of those goals,” says Horn. “When we do our work really well, you see all of these tiered benefits, both for the climate and for the community.”

Indeed, urban trails can strengthen communities—before, during, and after their creation. This is especially true of TPL projects thanks to our participatory design process. Remember those padded blue strips along The 606? You can bet your hat there were runners in that trail’s community planning conversations. 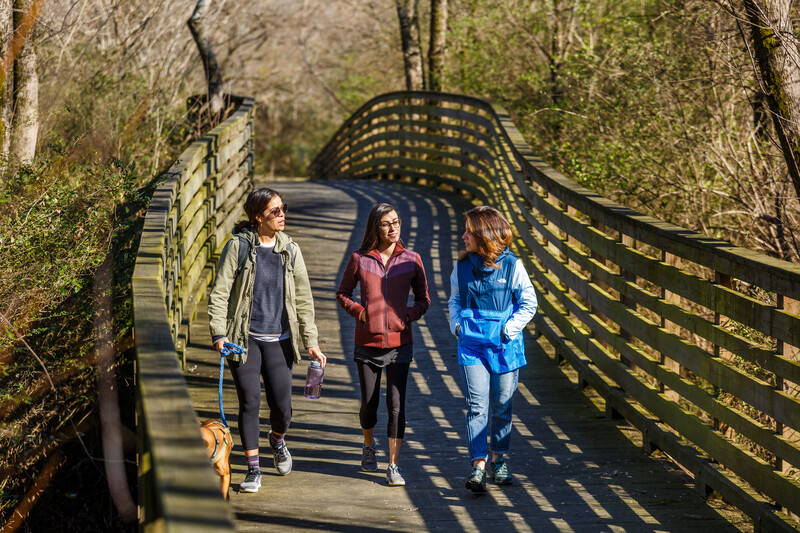 Even if great trails exist, you might be asking how realistic it is to change people’s transportation habits. “This is not a simple paradigm shift,” admits Horn. “You have to attack it from all directions. You have to create a lifestyle where you don’t need a car for every single trip.” He urges us to think about how cities grow, noting that implementation of urban trails leads to good planning around them. “It’s not just about individual trips,” he explains, pointing out that new development and new opportunities are often a result of improved access. “When you’re really threading in among neighborhoods, you get that dual benefit of changing transport patterns and giving people close-to-home recreation,” he adds.

Carter Strickland, TPL’s New York state director, highlights safety along with recreation in regard to our Long Island Greenway project, where we’re planning a 175-mile multiuse path between Manhattan and Montauk, which he calls “the quintessential post-war, car-dependent suburban home of 3 million people.” On a recent cycling trip along the North Shore Rail Trail, “a direct model for the Long Island Greenway,” he spoke with a man who was teaching his granddaughter how to ride a bike. The man said the trail was “the only safe place to take her.”

Horn mentions Five Mile Creek Urban Greenbelt in Dallas, Texas, and Florida’s Gulf Coast Trail as two “on-the-drawing-board” TPL projects with the power to truly transform the cities they’re near and “the dense suburbs that ring them.” He believes in their potential because he’s seen it happen.

Chattanooga’s South Chickamauga Creek Greenway—a 12-mile recreation corridor that serves more than 30,000 people—is one example, a place Horn says “our trails footprint is really profound.” Similarly, he watched as Portland Bayside Trail became “the backbone of a residential neighborhood.” The trail provides what was once a very industrial area with an easy way to travel “toward shopping, restaurants, school, etc. without ever having to get in a car,” says Horn. 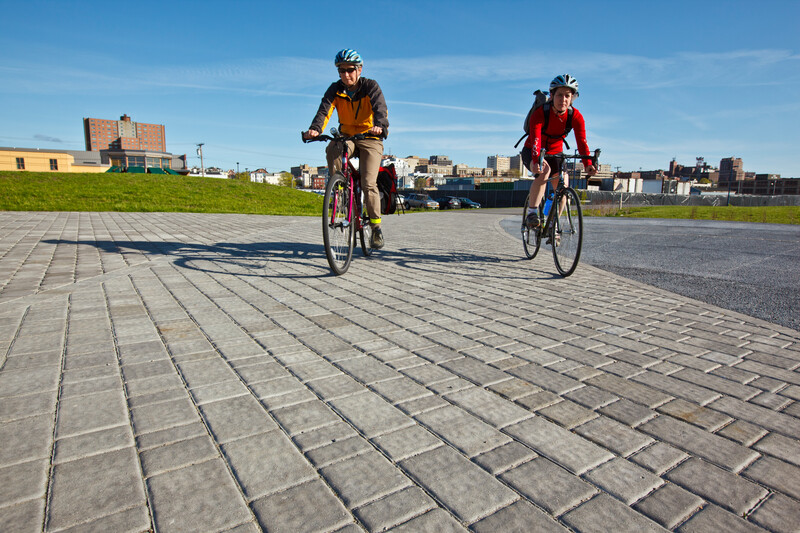 Getting people out of their cars and onto urban trails is ultimately the goal—how we’ll succeed in reducing the emissions that cause climate change. Which brings us back to The 606: “There are lots of stories about families who use the trail to get to school by bicycle,” says Caroline O’Boyle, TPL’s Illinois state director, “and plenty of people who use the trail to commute to work.” This, however, is her favorite anecdote, “We have reports of a lot of people who purchased a bicycle for the first time in their adult lives in order to take advantage of the trail.”

But don’t take it from us; take it from Chicago resident Maria Irias: “We love being out here on the trail,” she says. “We live nearby, and we try to come every other day. It’s so family friendly, and we can easily walk or run the whole trail. It’s friendly up here in general—we say hi to other families. It feels like one big community.”

Support our urban trails work and help connect everyone to the outdoors by making a gift today.

Amy McCullough is senior writer and editor for Trust for Public Land and managing editor of Land&People magazine. She is also the author of The Box Wine Sailors, an adventure memoir.