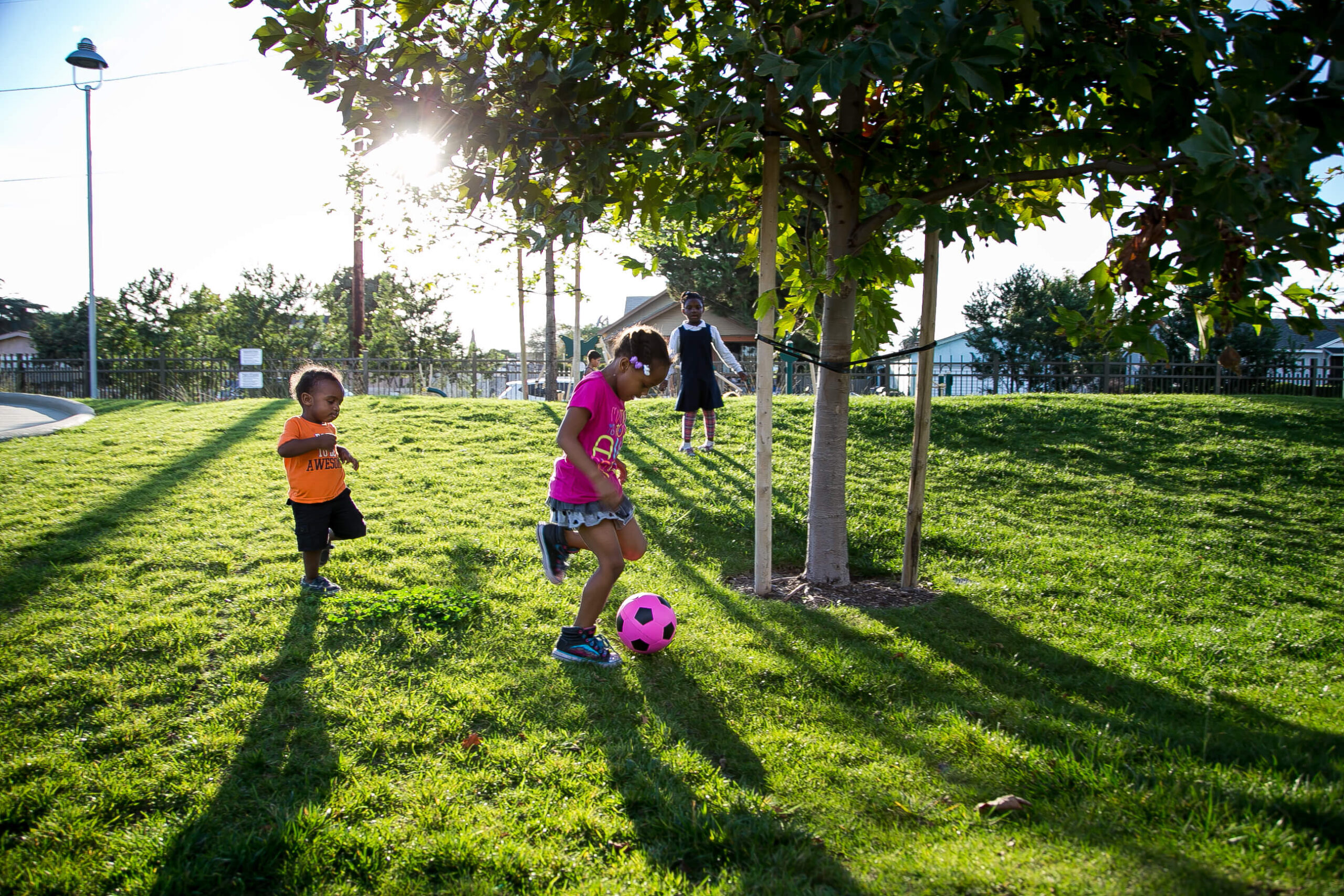 Stories
In a Heat Wave, Parks Are Literally the Coolest

Parks are a superpower, and we need more of them—big and small. In addition to reducing heat and helping with flood control, they offer places to keep us healthy and connected to nature and each other.

It’s 2 o’clock on a hot summer afternoon. You’re getting ready to meet some friends at the park for a game of basketball. Which T-shirt would you grab from the closet? 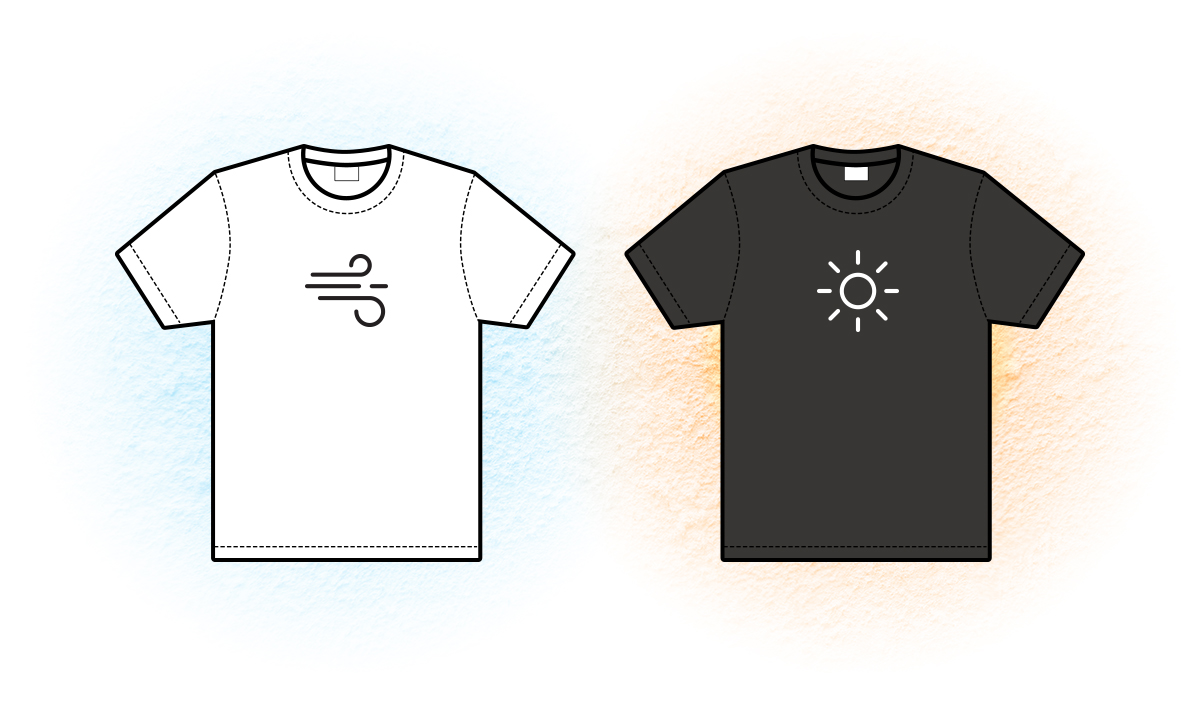 If you reach for the white shirt, you already understand the basics of the heat island effect: Dark surfaces absorb heat from the sun, and light surfaces reflect it. On sunny days, much of the infrastructure in urban areas—from asphalt roads and dark shingles on rooftops to fresh blacktop on the basketball court—traps heat and drives up the temperature. That’s why cities are often so much hotter than rural areas surrounding them.

The heat island effect drives higher energy consumption for air conditioning, plays havoc with plants’ growing seasons, and even fosters freakishly huge spiders. And when summer temperatures soar—as they have this year across much of the United States—the heat island effect can also be dangerous.

That extra heat—up to 5 degrees Fahrenheit during the day and 22 degrees at night—can be the difference between discomfort and illness, or even death—especially for the elderly, kids, and people with existing health issues. That’s why Trust for Public Land helps cities use parks and green space to protect residents from the effects of climate change, from rising seas to stronger storms and more intense heat waves.

Architects, urban planners, engineers, and homeowners are finding ways to mitigate the urban heat island effect. Some efforts are pretty sci-fi—like this 150-foot tall, sensor-aided cooling tower, one Mongolian city’s attempt to grow its own glacier, or a proposal to lay a network of special water pipes under roadways. But there are also plenty of low-tech, sensible strategies ready for cities to use right now.

Climate experts say tree canopy is the single most effective natural solution to urban heat islands. Trees cast cooling shadows, and they also breathe water vapor out through their leaves, which cools the surrounding air.

At William Dick School in Philadelphia, we helped turn an asphalt schoolyard into a green oasis—with a way better jungle gym. It’s one of hundreds of bare schoolyards across the country that Trust for Public Land has transformed into shady escapes for the whole neighborhood. 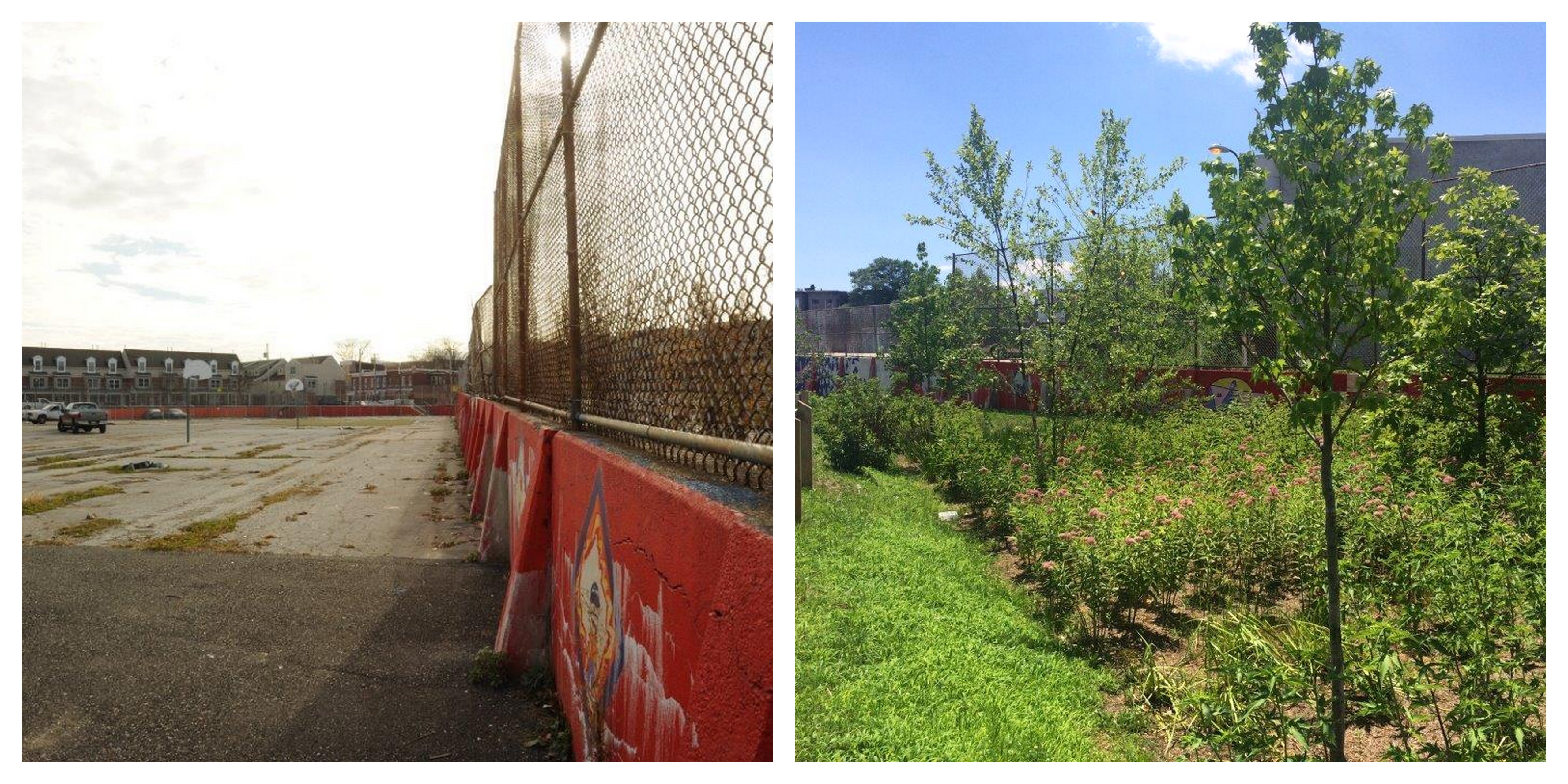 Remember the white T-shirt? The same principle that applies to your torso applies to your town—the lighter the surface, the cooler you’ll be. It’s as simple as painting dark rooftops white to keep your home—and neighborhood—cooler. In South Los Angeles, Trust for Public Land is turning dark, vacant alleys into cool pocket parks, complete with new trees and light-colored, reflective paving.

A transformed alley in South Los Angeles keeps the neighborhood cooler, and gives kids a safer place to play.

…green space, that is. From front lawns to ballfields to urban forests, natural areas stay cooler than built areas. Trust for Public Land is working in densely populated cities across the country to save what green space still exists, and create more where it’s needed most.

Just a few examples: In the Watts neighborhood of Los Angeles, we helped transform a vacant, gravel lot into a cool, green city park. In St. Paul, we saved more than 12 acres of green space from development—including some beautiful old shade trees—to create Frogtown Park and Farm. And in Atlanta, we’re looking forward to the grand opening of Cook Park, with trees to keep the neighborhood cooler on hot days, and sophisticated green infrastructure features that help reduce chronic flooding. 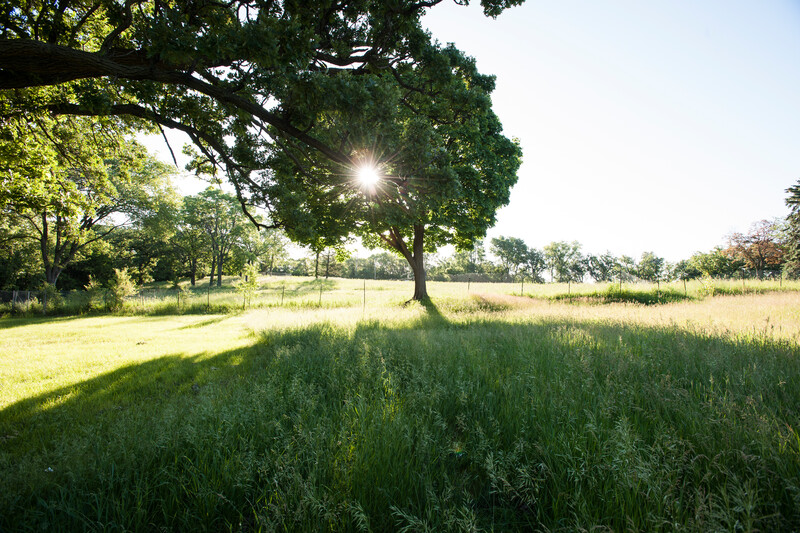 Neighbors rallied to keep these cool characters at Frogtown Park and Farm in St. Paul. Photo: Jeff A. Johnson

Battery-powered cars may be the ride of the future, but for now, most of us drive around behind big combustion engines. Tailpipe emissions contribute to climate change and put off significant heat—so providing drivers with an alternative to getting behind the wheel can contribute to a cooler city. From Washington D.C., to Cleveland, to Seattle, our urban planning and GIS pros are knitting together fragments of bike paths into extensive trail networks that make it safer and easier for residents to commute by bike, instead.

Shade, open space, and reflective surfaces can make a big difference—but on a hot day, there’s no relief like a splash of cool water. That’s why we’re helping bring accessible and resource-efficient water features to city parks across the country, like the splash pad at Atlanta’s Historic Fourth Ward Park. It’s a cool refuge for residents throughout the city’s stifling summer months. 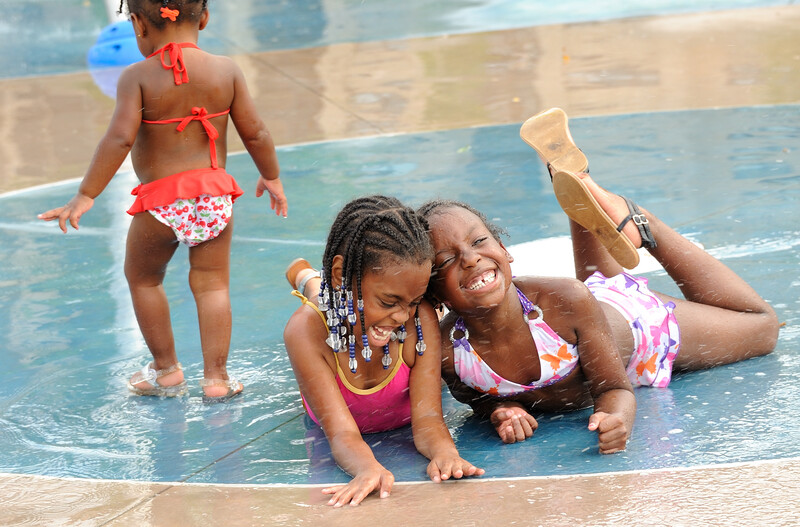 One of the biggest motivators to address urban heat islands has as much to do with cities’ demographics as their design: researchers are discovering that the heat island effect is more severe in low-income neighborhoods. In many American cities, tree cover and access to parks strongly correlates with income. By creating parks and open space where it’s needed most, Trust for Public Land is working to change that. As we look toward a warmer future, this work is going to matter more than ever.

This article was originally published in August 2016.