Made you look: the art drawing attention to climate change
By Trust for Public Land
Published September 13, 2017
Spread the Word

Made you look: the art drawing attention to climate change

Climate change can be hard to wrap your head around: it’s a tough task to keep up with the news—never mind the science. Sometimes just thinking about the challenges ahead can feel so daunting that it’s tempting to ignore the issue altogether.

But turning a blind eye is no way to prepare for rising seas, bigger storms, or hotter summers. So, how to keep a thorny topic like climate change top of mind? The answer may lie not in science, but in art.

Creative works on the theme of climate change are cropping up everywhere from neighborhood parks to national parks, sparking curiosity, conversation—and even change. Here are three examples of public art that puts climate change in the spotlight.

“Gardens of the Anthropocene”

Artist Tamiko Thiel works in augmented reality, using computer screens to superimpose fanciful images onto the real world (think Pokemon Go). She created “Gardens of the Anthropocene” for the Olympic Sculpture Park in downtown Seattle, a waterfront protected with help from The Trust for Public Land.

Walking through the interactive artwork, smartphone-wielding visitors can peer through their screens to see Thiel’s depictions of common Pacific Northwest plants. Her art imagines how these species might adapt to life on a warmer planet: in her version of the near future, the demure pink blooms of a flower called “farewell-to-spring” have mutated into giant, drought-resistant succulents, rimmed with sharp teeth that feed off of cellphone radiation. “I try to walk the line between creating something beautiful, and something that’s maybe scary or disturbing,” says Thiel. “That imbalance in your emotions is memorable and provokes ideas.”

“Gardens of the Anthropocene” has recently relocated to a permanent home on the campus of Stanford University.

“Your understanding of climate change depends a lot on where you are,” says Thiel. “So I wanted to engage the viewer at a specific site and get them to search for these mutant plants. The act of searching starts engaging you emotionally—and any way we can engage people about climate change is useful.”

“Piecing Together a Changing Planet”

Fiber artist Maya Schonenberger enjoys snorkeling among the vibrant reefs in Florida’s Biscayne National Park. But over the years she’s lived and worked in Miami, Schonenberger has seen her local dive spots hit by coral bleaching—a phenomenon driven by warmer seas that’s killing coral across the globe. So in 2012, Schonenberger approached a ranger about creating a climate change art piece for the visitor center. That conversation eventually led to “Piecing Together a Changing Planet,” a traveling exhibit of 26 climate-change-inspired quilts created by fiber artists from around the country. The exhibit was displayed in 12 national parks over a two-year run and seen by a quarter-million people. 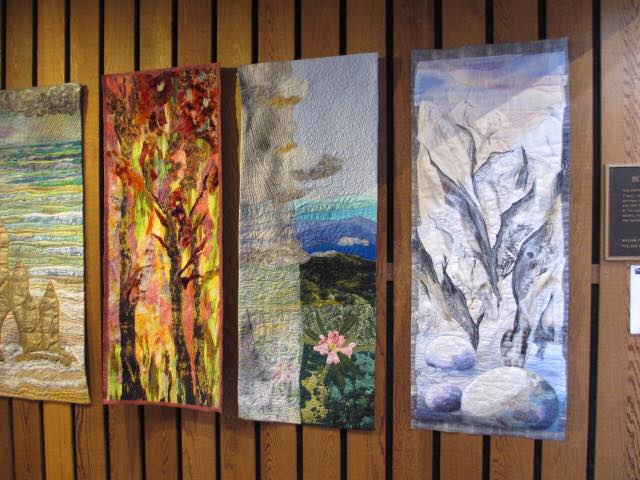 “Our goal was to create something that would reach every single person who saw the exhibit,” says Schonenberger, who took a break from preparing her home for the arrival of Hurricane Irma to talk with us last week. “Art allows viewers to generate their own connections to this complex issue. And hopefully, we made an image that sticks in your mind—and forces you to keep thinking about how your choices may be harming the places you love to visit.”

You may not pay them much attention, but those trees that grow in medians, sidewalks, parks, and street corners are hard at work keeping your city cool, green, and comfortable. So New Zealand-based artist Konstantin Dimopolous is highlighting the importance of our forests—literally. Through his “Blue Trees” project, he’s traveled to dozens of cities around the world, painting their urban forests a bold, electric blue. 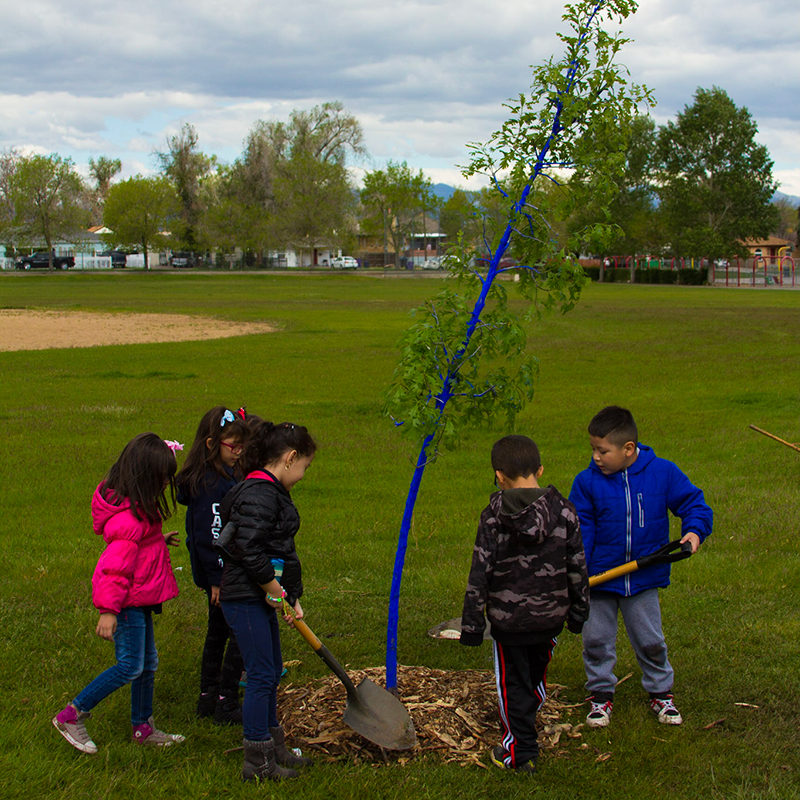 Kids at Castro Elementary in Denver’s Westwood neighborhood dug in to bring the “Blue Trees Project” to their city.Photo credit: Cara Benek

“Blue Trees” came to Denver this spring. Using a water-soluble, temporary, non-toxic pigment, Dimopolous—backed by an army of local volunteers—painstakingly transformed the trunks and limbs of 150 trees into attention-grabbing sculptures. The Trust for Public Land joined the effort in the city’s Westwood neighborhood, helping students at Castro Elementary School plant another 25 blue trees in their schoolyard. After the dye fades, the plantings will grow into air-cleaning shade machines—especially needed in Westwood, which has fewer trees and less green space than almost anywhere else in the Denver metro.

“[I’m hoping] that it creates a ripple,” Dimopolous told Westword magazine about the Denver installation. “It won’t save the forest, but it’s planting the idea that you can’t get too complacent about what you have. If we are doing our part, people will come behind us and do theirs.”