When we helped a group of locals protect 121 acres in western Massachusetts for farming in 2010, we knew the land was fertile. Years later, we’re still marveling at all that has grown there.

But the land’s most valuable commodity is the spirit of community it fosters. “It’s such a glowing example of successful citizen activism. Folks had a vision, they worked hard, and they realized it,” said Lilly Lombard, the farm’s founding director, three years after the land was protected. “People still almost can’t believe that we did it—we got our farm.”

You can get a taste of that community spirit by way of this warming dish from Crimson & Clover. Served with a salad or sauteéd greens, this root vegetable gratin makes for a simple yet beautiful fall dinner. 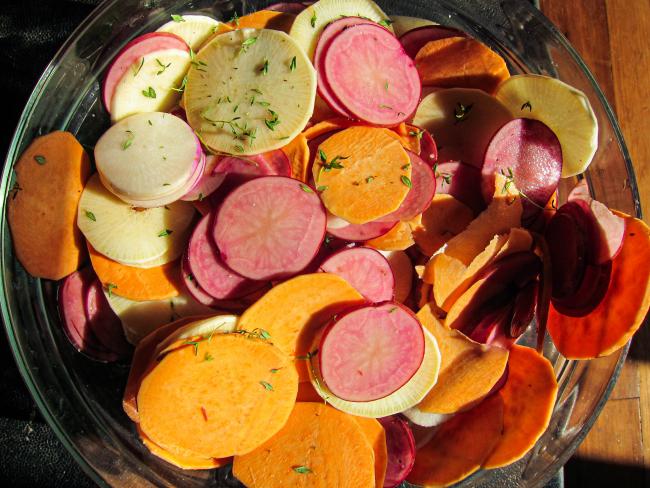 • Salt and pepper to taste

Preheat oven to 400 degrees. Thinly slice root vegetables with veggie slicer or mandoline. Toss with thyme and season generously with salt and pepper.

Remove dish from oven. Press vegetables down into liquid with the back of a spoon, and cover with shredded Gruyere.

Bake another 45 minutes or until roots are cooked through (test with fork) and top is browned.