This is not your average jungle gym
By Trust for Public Land
Published February 24, 2018
Spread the Word

This is not your average jungle gym

Sixty years ago, the activist Jane Jacobs was writing in part about San Francisco when she warned, “We are becoming too solemn about downtown.” Jacobs, whose Death and Life of Great American Cities is required reading for urban planners, once sized up San Francisco’s Civic Center—a few square blocks of grand government buildings and cultural institutions, neatly arrayed around spacious, orderly plazas in the heart of the city—and found the whole thing “ponderous” and “dull.”

But the scene at Civic Center last Friday afternoon was anything but boring. Workers strolled through on their way to grab lunch at nearby delis, couples lolled in the grass, tourists snapped selfies in front of City Hall, and the plaza was swarming with kids and parents who’d come to climb, swing, and slide all over the brand new Helen Diller Civic Center Playgrounds. 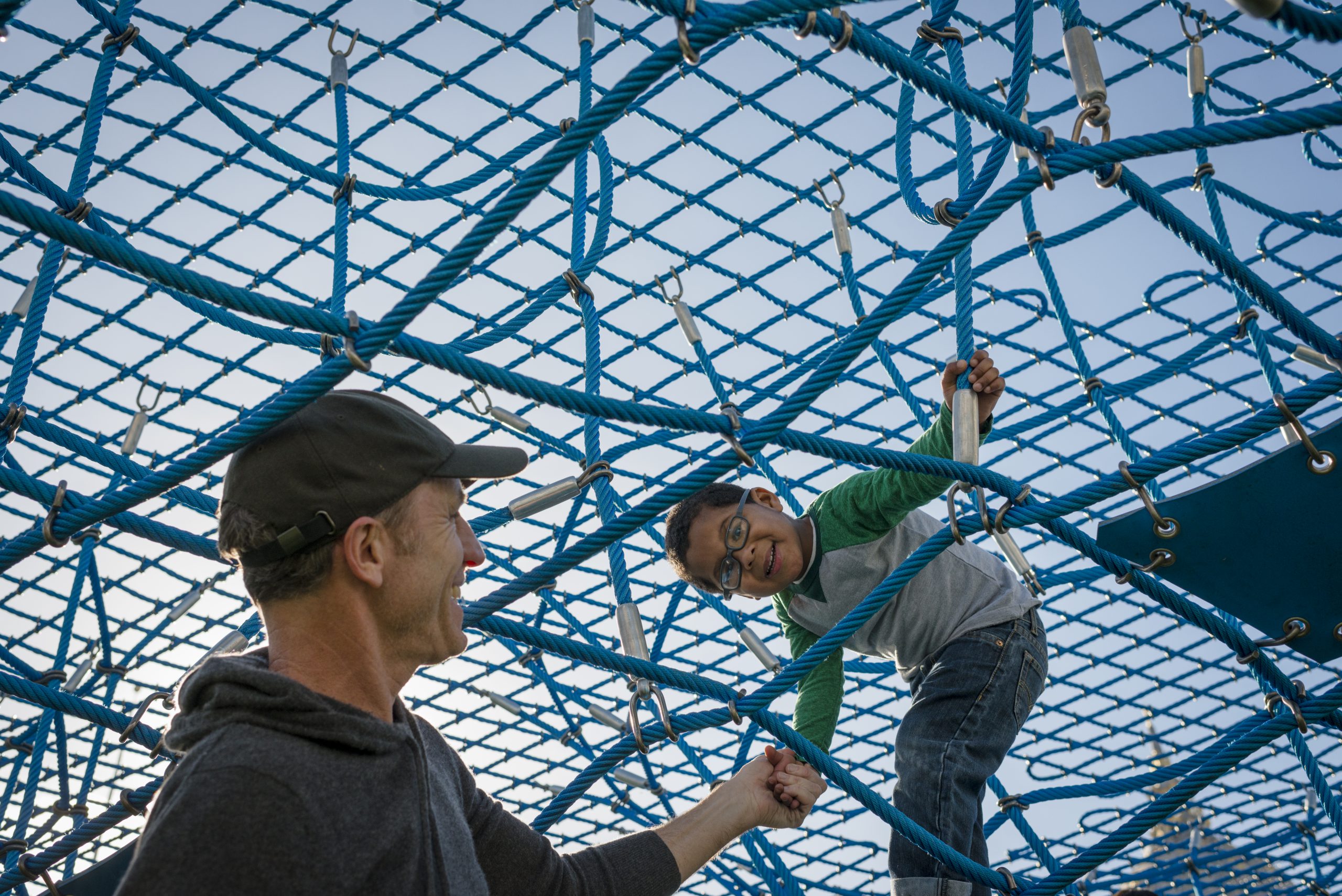 New twin playgrounds in the heart of San Francisco give kids and parents a reason to linger in downtown.Photo credit: Lindsay Upson

Created with help from The Trust for Public Land, the playgrounds opened to the public on Valentine’s Day and are already winning hearts. That’s no surprise: we worked with kids, parents, teachers, and neighbors to make sure the new playgrounds would welcome and reflect the vibrant and diverse community that surrounds them.

“This is not your average jungle gym,” said a woman named Anne, who was relaxing in the shade while her eight-year-old daughter, Bailey, roamed the new park. The centerpiece of each playground is a spiraling net structure that rewards climbers with a super-fast, two-story slide back to earth. The one-of-a kind design—with subtle artistic touches inspired by the city’s famous fog—are part of a larger effort to reinvigorate the Civic Center area with events, public art, regular programming, and workforce development. 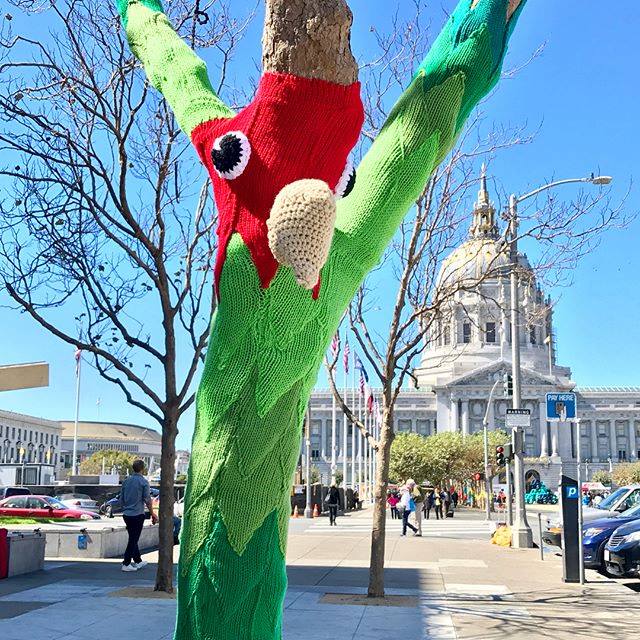 Artists and sisters Lorna and Jill Watt have created a series of “yarn bomb” installations on trees throughout Civic Center Plaza, part of an ongoing effort to reinvigorate the city’s hub for arts and government.Photo credit: Knits for Life

“Our goal is to create a more active, inviting environment in the Commons for all to enjoy,” said John Updike, the city’s real estate director. The effort in San Francisco reflects a national trend: as more families choose to stay in urban areas instead of moving to the suburbs, planners and advocates are looking for ways to make city centers more welcoming to all residents—including kids.

“These new state-of-the-art playgrounds will serve the growing families in the densely populated Civic Center and Tenderloin neighborhoods, creating a fun, lively plaza space for all to enjoy,” said Phil Ginsburg, general manager of the San Francisco Recreation and Park Department, which helped create the playgrounds. The playgrounds offer a much-needed place to play for the 32,000 people—including 4,600 kids—who live within a 10-minute walk. The previous play structures in the park were popular and heavily used, but the equipment was dated and the spaces poorly lit.

An interactive light display titled “KARL” (the city’s nickname for its ever-present fog) uses heat sensors to project light to create fog droplets and ripples of light in the plaza between the two playgrounds.

“We came here all the time before the playgrounds were rebuilt, because it’s the only park we have close to home,” said a mom who’d come to the playground with her four daughters. “But this? This is awesome. My girls are so excited to come here. My little one is running around yelling, ‘It’s my park! It’s my park!’”

In the week since their opening, the new playgrounds have already drawn kids and parents from across the city. Avery, a babysitter for two kids who live on the other side of town, decided to make a day of it: “We’ve been downtown since 10 a.m.,” she said. “We spent 90 minutes at the playground, then we went to the library and the Asian Art Museum. But before we could head back to our neighborhood, the kids wanted to give the swings another spin.”

The futuristic-looking playgrounds are a welcome sight even for adults just passing by. “It’s encouraging to see this place change for the better—to see it change to welcome more people,” said a man named Marc, who works in a government building across the plaza. “I walk through here every day, and it’ll make my day brighter to see kids and families out here making the most of the space.” 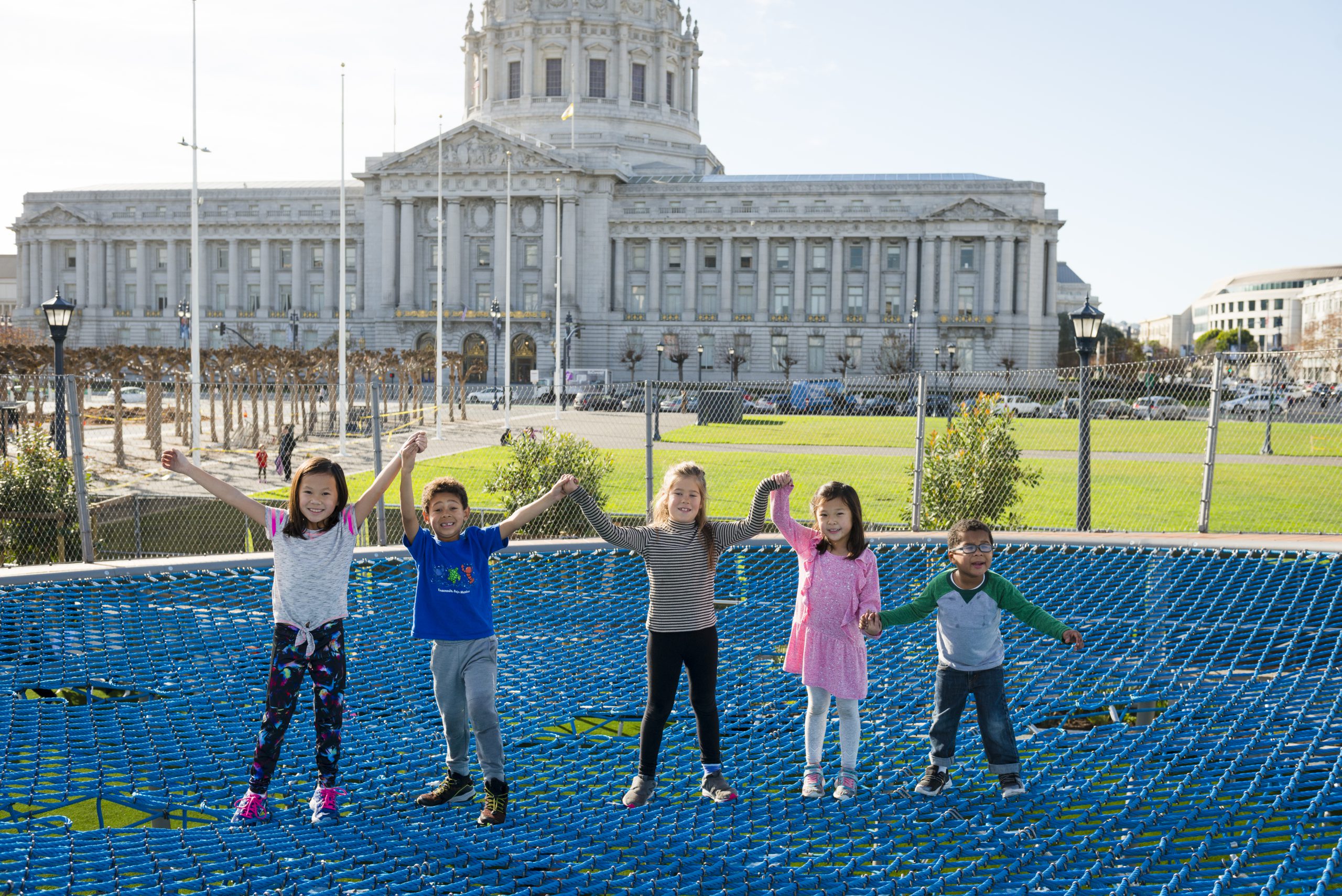 Civic Center borders some of San Francisco’s most densely populated neighborhoods, where safe open space is still too hard to come by. The playgrounds offer a much-needed place to play for the 4,600 kids who live within a 10-minute walk.Photo credit: Lindsay Upson

“An amenity like this is a big deal for people raising families in the city,” Anne said while her daughter ran for the swing set. “But it can also have larger effects for everyone. Making downtown more welcome for kids and families is just a good thing all around—once families take root, a neighborhood can really thrive.”