How one national park gateway town is weathering the government shutdown
By Trust for Public Land
Published January 10, 2019
Spread the Word

How one national park gateway town is weathering the government shutdown

When Seth Zaharias learned that the federal government’s partial shutdown would affect services at Joshua Tree National Park, he knew just what he needed to do. “On day one, I drove straight to Walmart and bought a hundred dollars’ worth of toilet paper,” he says. “Then I started making calls.”

Normally, Zaharias and his wife run a rock climbing guide company in and around Joshua Tree National Park. But during the ongoing shutdown, they’re two of hundreds of people who are volunteering their time, money, and hard work to care for the park in their backyard. Like many national parks, Joshua Tree remained open to visitors for the first two weeks of the shutdown—but most of the staff that keep the park functioning safely, and protect its delicate desert ecosystem, were told to stay home. 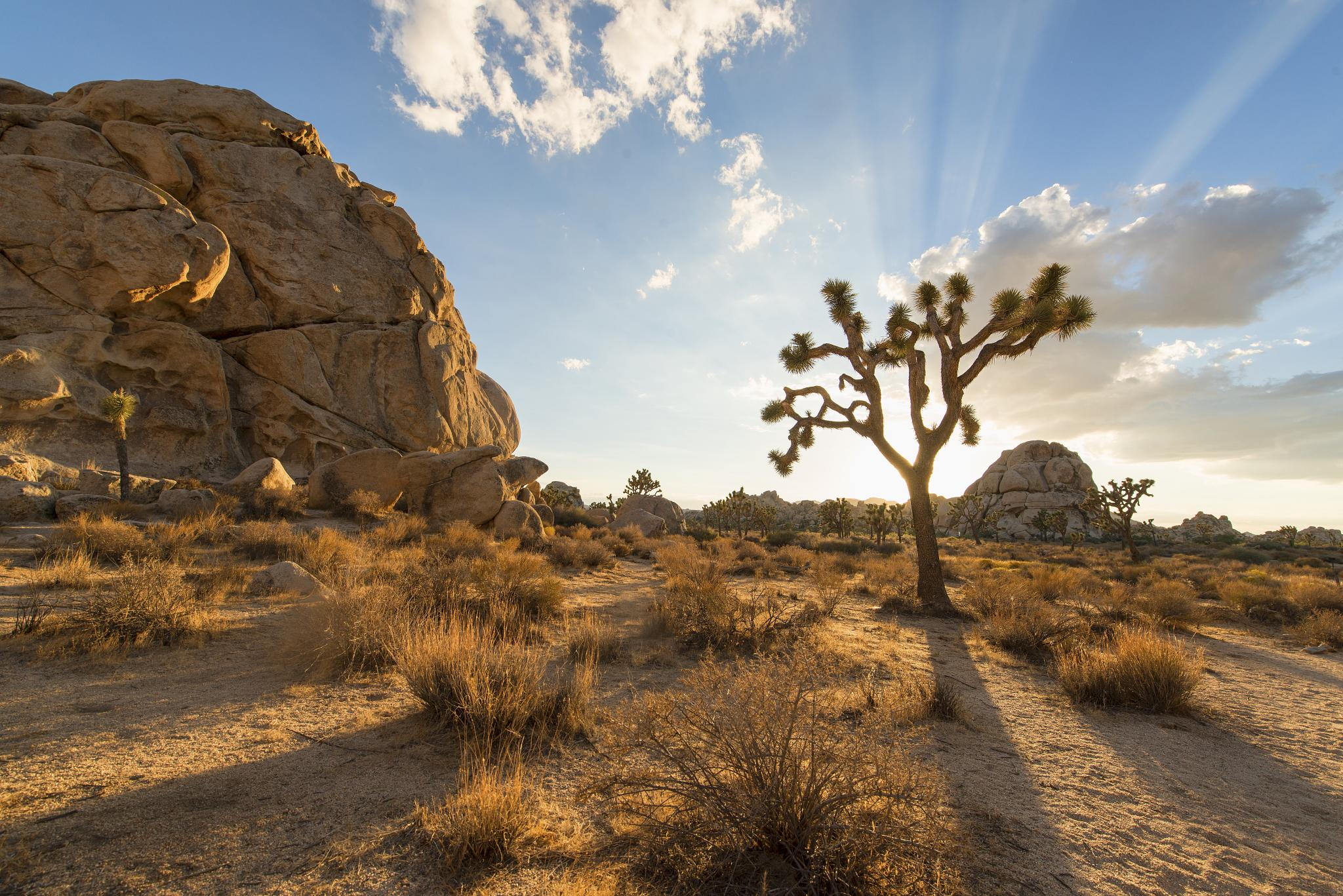 Joshua Tree National Park is a 1,200 square-mile desert preserve in the Mojave Desert of Southern California. It remained open to the public for the first two weeks of the government shutdown, but was short on staff and budget for safety and sanitation.Photo credit: Flickr user Christopher Michael

“Between Christmas and New Years is one of the busiest weeks this park sees all year,” says Zaharias. “Something like 300,000 people came through Joshua Tree that week.” Knowing that sanitation would be an issue, Zaharias drove through the park, distributing his trove of toilet paper and collecting the trash that would have otherwise festered as garbage cans reached capacity.

“Cleaning up trash and restocking bathrooms isn’t necessarily what I wanted to be doing with my time over the holidays,” he says. “But we weren’t just going to let the park overflow with junk.”

He invited his fellow climbing guides and other friends in the community to join him, and he put the word out on social media for residents to step in and help. Friends of Joshua Tree National Park, a local nonprofit that supports the park, helped orchestrate volunteers. The response, says Zaharias, has been almost overwhelming. “We’ve been out every day. I think it’s almost 400 people who’ve showed up, some of them day after day, with their trucks and trailers and whatever else they can bring to help out.” 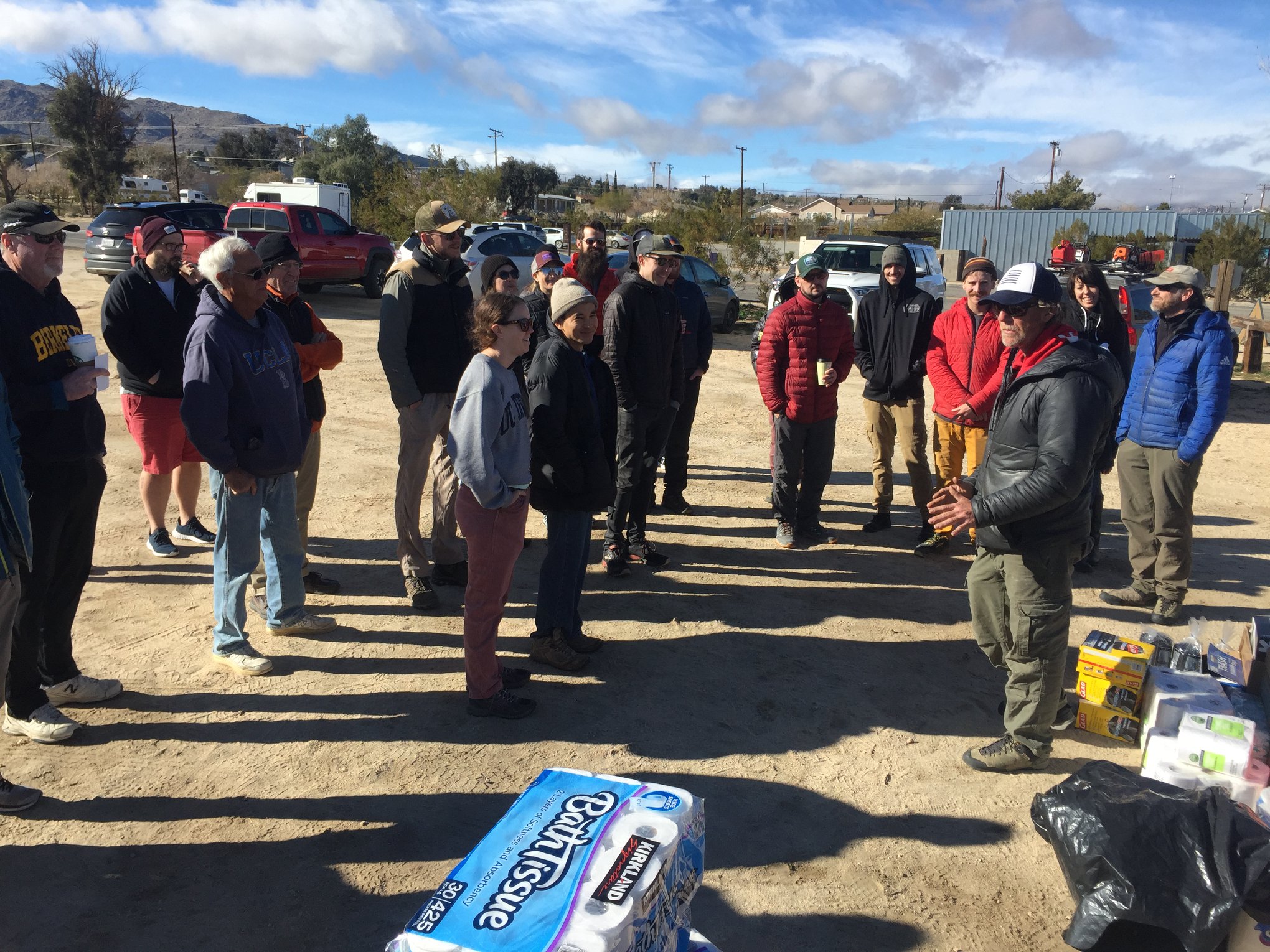 Zaharias, right, has helped coordinate volunteers to care for Joshua Tree National Park during the government shutdown. “We’ve had almost 400 people turn out to help since the start of this,” he says. “And the park showed it.”Photo credit: Seth Zaharias

The effort to keep Joshua Tree safe and protected is being repeated at hundreds of other sites across the country. At the Independence Mall in Philadelphia, members of the Ahmadiyya Muslim Youth Association came out in the rain to pick up trash. In Big Bend National Park, a hiker who fell and broke his leg was carried to safety by volunteers.

As a result, some national parks seemed to be weathering the shutdown in okay shape. “Until recently, the environmental degradation at Joshua Tree was minimal,” Zaharias says. But then came reports of more serious damage: in the absence of normal law enforcement presence, people began driving off roads, creating lasting damage to delicate desert ecosystems that can take decades to regrow. And then they found two of the park’s iconic Joshua Trees had been cut down. The superintendent announced a decision to close Joshua Tree National Park, “to address sanitation, safety, and resource protection issues in the park that have arisen during the lapse in appropriations.” The next day, however, administrators reversed the decision, announcing a plan to use funding from entrance fees to pay staff “to ensure the protection of park resources and mitigate some of the damage that has occurred during the lapse of appropriations.”

Since 1972, The Trust for Public Land has helped national parks expand or strengthen their protections more than 200 times. We’ve worked tirelessly to make our parks more accessible and welcoming for every person. But last week, we made the extraordinary request of calling on President Trump to close our national parks for the duration of the shutdown.

National parks are the heart and soul of so many American communities. That’s why a force of volunteers, state and local agencies, and nonprofits have risen to the occasion, committing time, money, and above all hard work to keep their parks safe during the shutdown. We’re grateful to everyone who’s stepped in to look out for the parks in their backyard: their efforts have made a huge difference for the lands we share. But as the damage documented at Joshua Tree shows, parks need robust funding and full-time protection—for the sake of plants, wildlife, and scenic vistas, and for the surrounding communities whose economies depend on keeping the parks healthy and thriving. 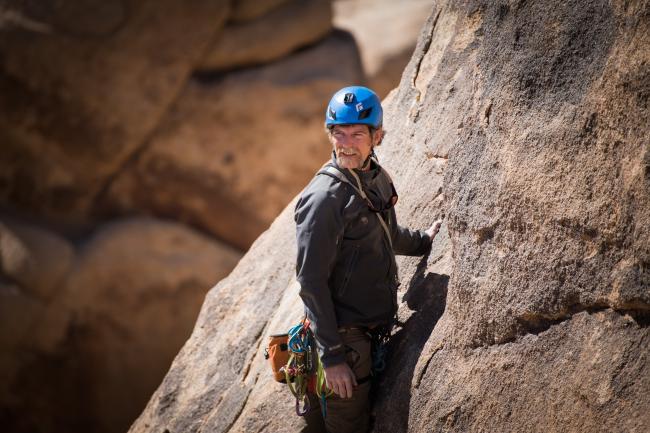 Normally, Seth Zaharias owns and operates a climbing guide service. “I’ve been a resident of Joshua Tree for 20 years, and owned a business here for nine. I love this park for countless reasons. I love the community that surrounds it.”Photo credit: Seth Zaharias

As a business owner, neighbor, and longtime explorer of the Joshua Tree Desert, Zaharias says he isn’t sure how to feel about this situation. “It’s a really weird spot this administration has put us in, without a doubt,” says Zaharias. “It’s hard to juggle my needs, and the needs of my employees, with our concern for the environment. The national park is the economic backbone of this community. If the park had been closed over the holidays, that would have had a disastrous effect for the people who work for me. Folks here don’t make a lot of money, so lost revenue during one our busiest weeks of the year would have been really bad for them. The best solution to this problem is to just end the shutdown and reopen the government, and do that as soon as possible.”

For the safety of the parks and their visitors, national parks should be closed until the government is reopened. Agree? Sign the petition.