Before she logged first ascents in the remote mountains of Nepal, Pakistan, India, Chile, and Colombia—and before her big sponsorships, her Instagram following, and her spot on the team at The North Face—Anna Pfaff was a young woman with a van and a plan: to spend as much time as possible climbing, in as many of America’s wild places as she could reach.

That’s why Pfaff is joining dozens of her teammates in support of a new partnership to create access to outdoor recreation where it’s needed most: The North Face has donated $1 million to The Trust for Public Land to fund  free, public climbing walls in city neighborhoods across the country. We sat down with Pfaff to hear why expanding access to nature and the outdoors for kids growing up in cities is an issue near to her heart. 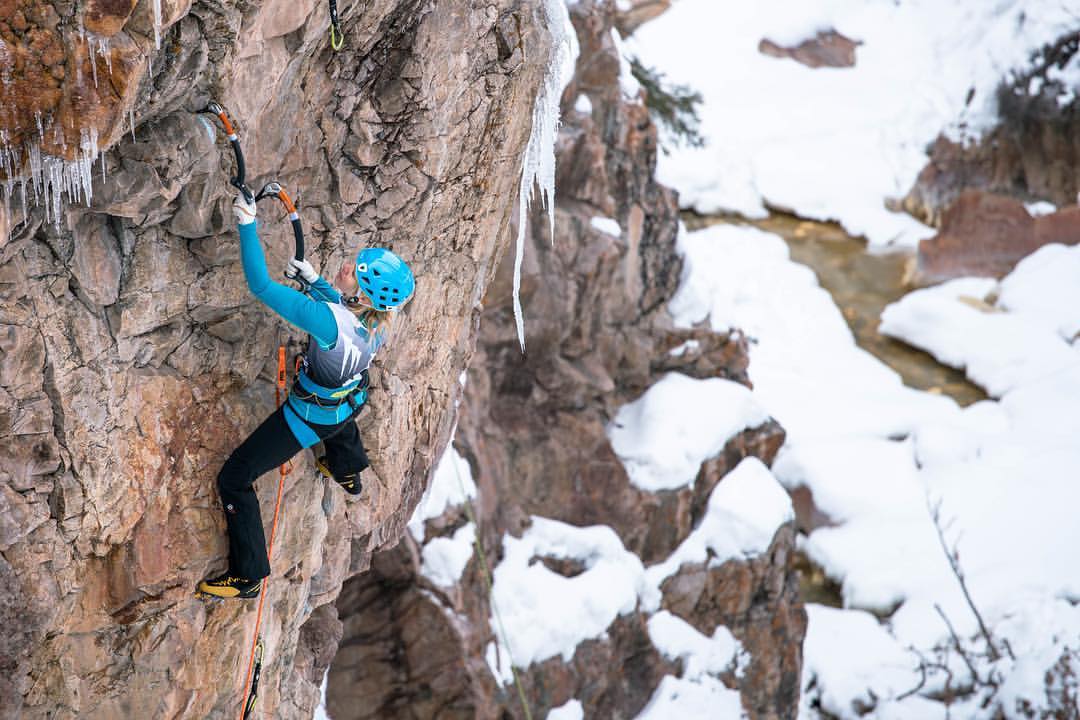 Pfaff digs in at the Ouray Ice Park, expanded in 2007 with help from The Trust for Public Land. Learn more: tpl.org/our-work/ouray-ice-parkPhoto credit: Savannah Cummins

You grew up in rural Ohio, not known for mountains. How did you get into climbing?

I’d say climbing found me. I had just moved to Denver to finish my bachelor’s degree, and I happened to sit next to a couple of climbers in an English class. They invited me on a weekend trip to Indian Creek, which is a rock climbing epicenter out in Utah that was finally just protected as part of the Bears Ears National Monument. I was psyched to just go hang out in the desert and camp, but the climbers there lent me all their gear and showed me the basics.

Why did climbing make such an impression on you?

That first trip to Indian Creek woke something up inside of me, and I knew I had to keep doing it. The physical challenge and reward of climbing is part of it, but the instant community is what really drew me in. Six months later I made my first trip to climb in Yosemite Valley. Within a year, I’d climbed El Capitan.

Is it typical in this sport to progress so quickly?

Maybe not, I don’t know! I do know I have always had great teachers and mentors. There’s a big, supportive climbing community in Yosemite Valley—the women and men I climb with are happy to teach, and I was ready to learn. They didn’t just drag me up routes—they made sure I was learning the right way to do things.

Pfaff and fellow mountaineer Lindsay Fixmer summit a climb in India’s Raru Valley. For much of her climbing life, Pfaff has pulled double duty as a nurse in Oakland to finance her far-flung expeditions.Photo credit: Savannah Cummins

What do you think of the proposal to raise entrance fees at national parks (and rock climbing destinations) like Yosemite, Zion, and Joshua Tree?

It’s really unfair. When I was just getting started as a climber, I didn’t have $70 to spare just to get into the park … I actually still don’t, really. And I have it easy: I’m not trying to bring a family along. It’s not just entrance fees that are going up.  A friend of mine runs a small guiding company in Joshua Tree, helping Boy Scouts earn merit badges—his  fees are going to go way up, too. I think it will discourage people from even trying—trying to get there, or trying to learn a new skill from local guides. It’ll make our national parks less accessible, and it sends the message that these are only places for rich people. And that’s not right. National parks belong to everybody.

How have you made it work as a professional climber?

I lead a kind of double life. I work as a nurse in Oakland California. It’s a flexible job, so I basically work to save up money for climbing trips. Sometimes I’ll pull, like, 20 night shifts in a row, then turn around and plow all the money I’ve made into expeditions to places I’ve never been before. But as much as I love trips to these wild remote places, I also value having my other foot in a busy, diverse city like Oakland. Each one makes me appreciate the other.

Does outdoorsiness run in the family?

It does! My family is in Ohio, so it’s a different kind of outdoorsy: more like, “Let’s eat casserole and go for a stroll and play cards in a park some place,” … which I love! Every time I go home, I’m more impressed with what the Cleveland Metroparks and National Park Service are doing in northern Ohio. They’re building all these bike trails—you can hop on a bike in downtown Cleveland and ride on a trail all the way through the Cuyahoga Valley National Park. It’s awesome, and I always look forward to going home and exploring new trails with my family.

How has joining The North Face’s team helped you make a difference on the issues you care about?

Joining the team has given me a bit of a platform to speak out and participate in things that I think are important, like lowering barriers that folks face to getting outside. I’m proud that The North Face is partnering with The Trust for Public Land to build free public climbing walls in cities across the country. If kids want to learn how to climb, they won’t need to pay a gym fee or find a ride out to the mountains. They’ll be able to discover this awesome sport and community right in their neighborhood. 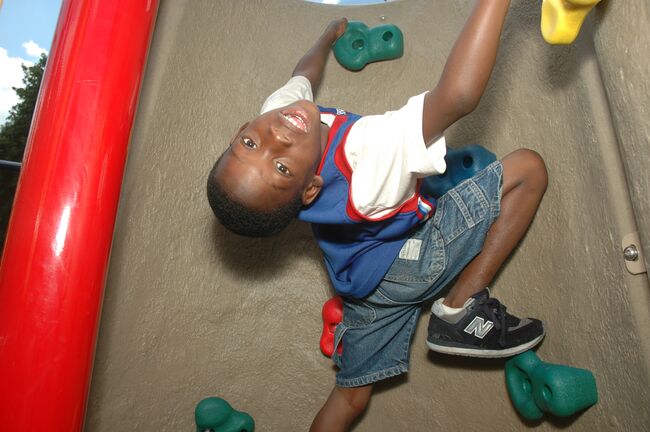 The Trust for Public Land and The North Face are building climbing walls in city parks across the country. “Not everyone will love climbing, but it might make the difference for some kids, and open their imaginations to the sport,” says Pfaff.Photo credit: Marni Horwitz

I actually just finished packing for Antarctica! I’m joining a North Face expedition with Conrad Anker, Savannah Cummins, Cedar Wright, Alex Honnold, and Jimmy Chin. We’re going to this area called Queen Maude Land, which has big granite walls kind of similar to El Capitan, but bigger and crazier and more remote because they’re coming right off a glacier. We’re going down with a team mentality and just hope to climb what we can with the time we have.

Will this be your biggest expedition to date?

Oh, yeah. It might be the biggest trip of my life! I don’t know, because I still like to think I’m pretty young, but this is going to be a huge, challenging, awesome experience. I’m so excited. 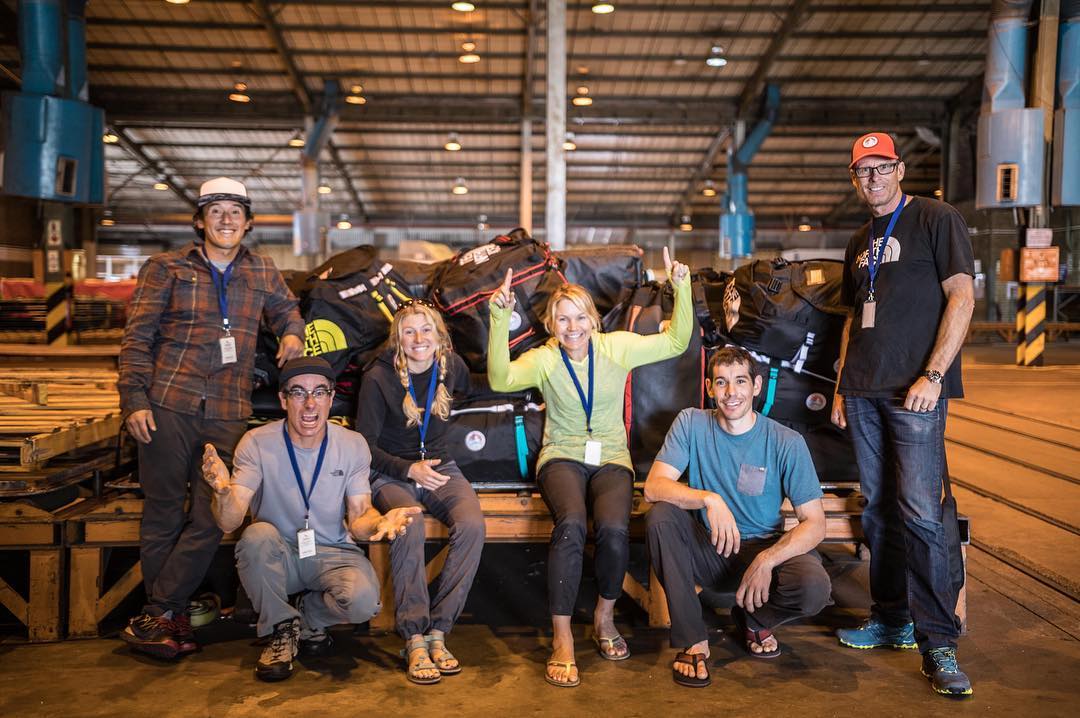 Pfaff, in green, with her Antarctica teammates. Alongside her medical expertise and mountaineering skills, she says her big role on expeditions like this is morale booster. “I’m always the one going, ‘Yeah! You got it!’ which is important!” she says.Photo credit: Pablo Durana