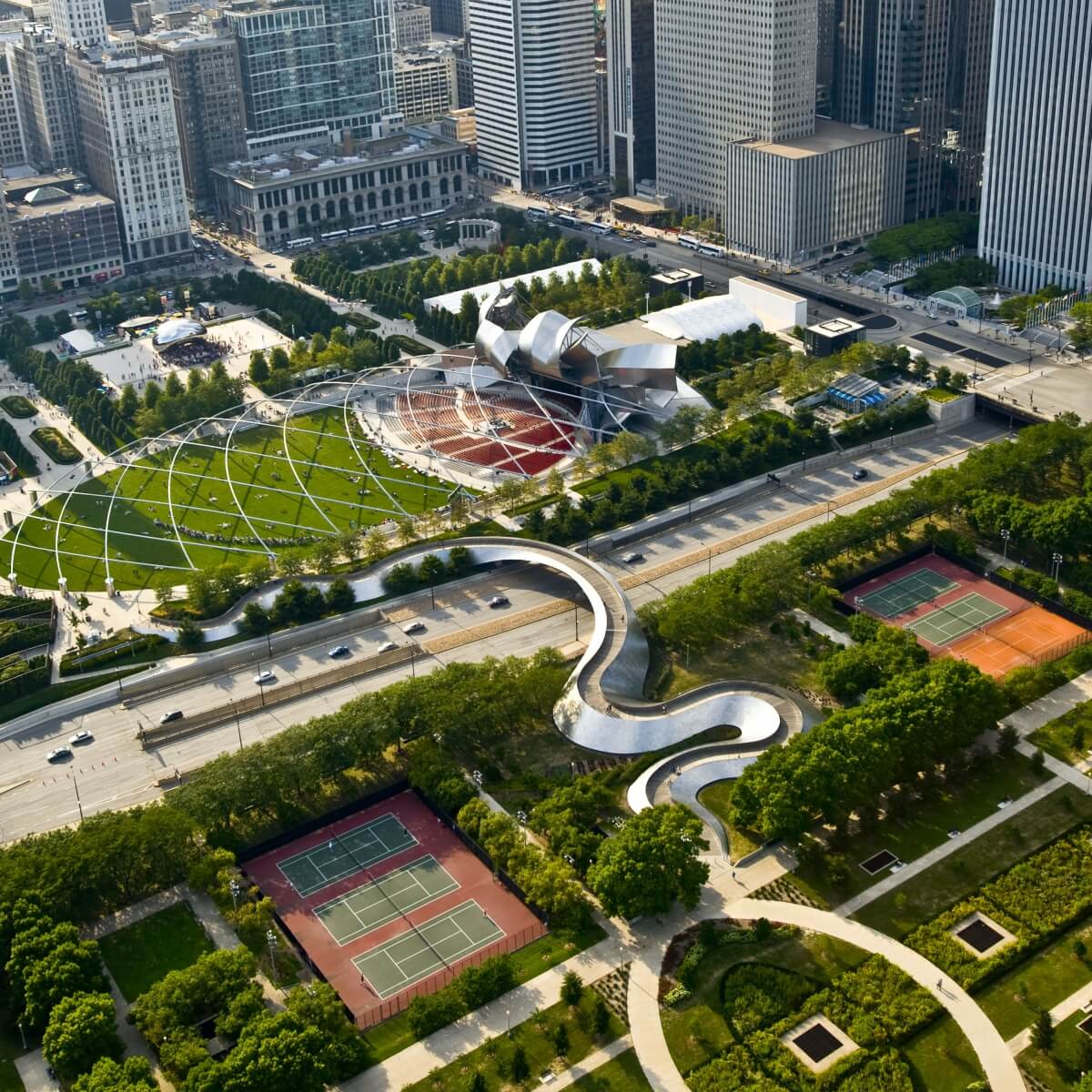 ParkServe®
The ParkServe
Detailed information about city parks in the U.S.

Trust for Public Land maintains a comprehensive database of local parks in nearly 14,000 cities, towns and communities. We used census-defined urban areas to define where to collect and create local data for cities, towns, and communities. We obtained geographic boundaries from the US Census Places geospatial dataset, and associated population estimates are derived from Esri’s 2021 U.S. demographic estimates. We attempted to contact each city, town and community with a request for their parks data. If no GIS data was provided, we created GIS data for the place based on available resources, such as park information from municipal websites, GIS data available from counties and states, and satellite imagery.

Cities, towns, and communities were then emailed a link to view the park data compiled in their area to verify the boundaries and attributes of the parks in the database through our custom web-based ParkReviewer™ application.

Parks data for the 100 largest cities are updated annually, and parks data for all other cities are based on submission to the ParkReviewer and updated monthly upon verification.

For each park, we create a 10-minute walkable service area using a nationwide walkable road network dataset provided by Esri. The analysis identifies physical barriers such as highways, train tracks, and rivers without bridges and chooses routes without barriers.

Using these 10-minute walk service areas, we generated overall access statistics for each park, place, and urban area included in the database, and then further disaggregated by several demographic variables – race/ethnicity, age, and income. In communities with an exceptionally small number of block groups, 10-minute walk demographic calculations are not available.

All calculated population statistics are based on 2021 US Census Block Group estimates provided by Esri.

All populated areas in a city that fall outside of a 10-minute walk of a park are assigned a level of priority, based on a comprehensive index of six equally weighted demographic and environmental metrics. These areas are census block groups from which we remove unpopulated areas and erase the 10-minute walk service areas. Then the metrics below are calculated for each block group, normalized relative to each city, and averaged to create the park priority.

*Based on 2021 US Census Block Groups provided by Esri

In May 2022, we released the heat-risk priority zones. These areas highlight where urban heat islands coincide with high density of people outside a 10-minute walk of a park. For each city, the park priority area block groups that are in the top two quintiles for heat AND the top two quintiles for population density were extracted, then merged into contiguous areas. The top five of these areas with the highest population are labeled on the map, indicating where many people live without park access and are exposed to relatively high land surface temperatures. However, in some cities, there are fewer than five heat risk priority zones.

The mapping platform hosts a suite of data to visualize contextual information about communities and their parks:

How can I use the ParkServe® database to learn about my city’s park system?

ParkServe can help you visualize your city’s park system and inform decisions by identifying areas most in need of a new park. You can access the ParkServe landing page at www.tpl.org/parkserve. Here, you can search for your city and view your city’s unique profile page. Listed on each city profile page you can find:

Please note: If you are not seeing 10-minute walk demographic breakdowns on a city’s profile page, it is either because the city you have chosen has no parks, or there is not enough demographic data available to us to provide reliable statistics. 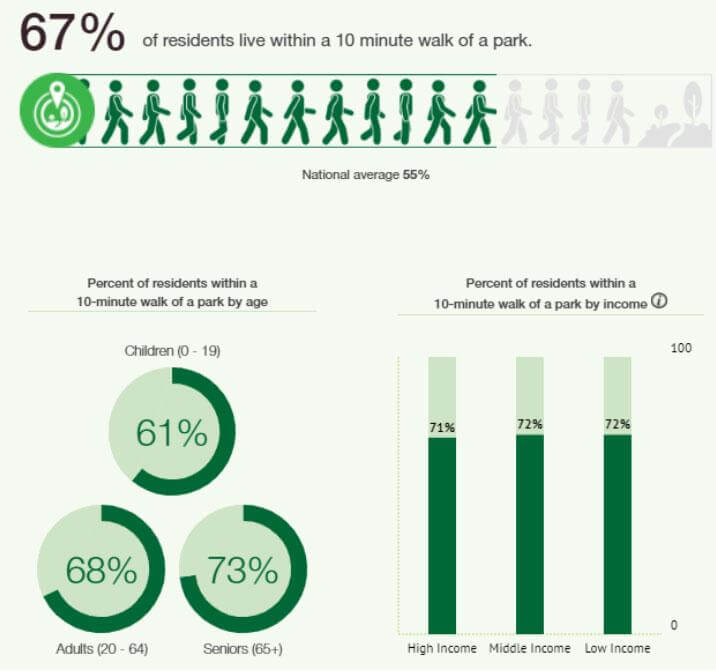 How do we define a park?

In order to accurately represent park access across large communities, open public access is the key criteria for inclusion in our database. We include a wide variety of parks, trails, and open space, so long as there is no barrier to entry.

Examples of parks we include:

Examples of parks we don’t include:

What tools exist to aid in park planning?

In addition to viewing this data in the city profile page and web map, you can also export a 2-page PDF that provides a map of the entire community, as well as the 10-minute walk access statistics for the area of interest broken down by age, income, and race. You will find this option as you scroll below your city’s map to view the city-level report. 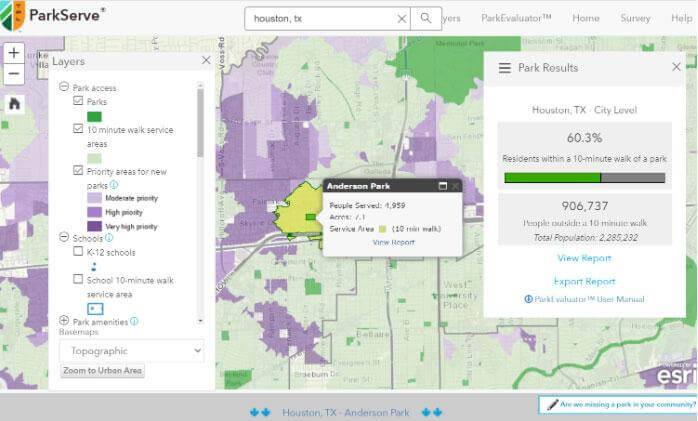 Lastly, the ParkServe mapping application provides a tool called ParkEvaluator™ to assist in city planning. This tool allows users to draw new parks and/or trails within a selected city and run an analysis to view how these parks affect the city’s park access statistics. This is a great resource for planning and visualizing how the addition of new parks might impact your community. For detailed instructions on how to use the tool, see this document.

How can I add missing parks or submit edits to the data?

If while looking through your city’s ParkServe® data page and city map you notice that there is data missing such as a new park, we want to know! In the mapping application, you will see a white box with blue highlights in the bottom left hand corner that reads “Are we missing a park? Tell us!”