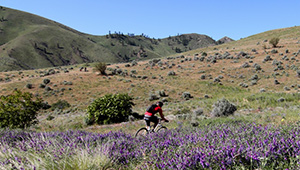 The Wenatchee Foothills are the visual and recreational anchor for a distinctly livable, beautiful, and growing community. They provide close to home recreational opportunities for the 75,000 people living in the Wenatchee Metropolitan Area. With their scenic beauty, wildlife, and network of trails and open space—the Foothills are for everyone.

In 2013, The Trust for Public Land, in partnership with the Chelan-Douglas Land Trust, helped complete the Wenatchee Foothills Campaign. The two-year campaign raised $8.4 million, to protect land and open space in the foothills, making it the largest fundraising campaign ever undertaken by a nonprofit in north central Washington. The campaign funds were used for land purchases, restoration, trail building, and stewardship-and remarkably doubled the acreage available to the public to more than 6,000 acres.