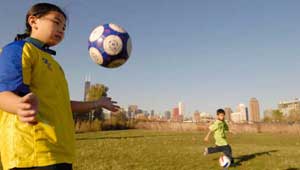 Nearly 40 years after Chinatown’s only public park was demolished to make way for the Dan Ryan Expressway, the South Side neighborhood celebrated the dedication of a new five-acre jewel on the Chicago River in 1999—Ping Tom Memorial Park. Because the current park is not large enough to serve all recreational needs, the city plans to expand the park so it can fully meet the needs of the changing Chinatown community with soccer and ball fields, a field house and a swimming pool. While the Chicago Park District owns another unimproved expansion parcel along the river, its narrow shape and limited access presented problems. At the request of the Park District, TPL helped the city acquire an adjacent five acres of abandoned railroad land owned by Burlington Northern Santa Fe Railroad that is more accessible and more suitable for active recreation.

Leading negotiations to secure the land, TPL brought the railroad to the bargaining table and secured grant funding from the U.S. Environmental Protection Agency for the initial environmental assessment work. This former rail line contains pollutants that will be cleaned up before the land can become a park. Commonly referred to as brownfields, former industrial sites pose distinct problems to neighborhoods as they sit idle and undeveloped. Redeveloped, they offer incredible opportunities for more parks and open space in densely populated urban areas. In June of 2002, the Chinatown community celebrated the expansion of this park.