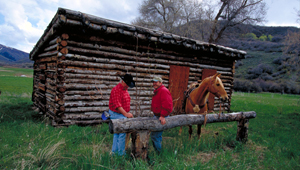 Located on the eastern border of the Wasatch Mountains near Salt Lake
City, 7,300-acre Peaceful Valley Ranch epitomizes the region’s pastoral
beauty. This working ranch has been in the same ownership for more than
one hundred years. The ranch contains mountainsides of gambel oak, rich
riparian corridors of cottonwood and willow, and lush valleys that
support large herds of elk and mule deer. Historic features include the
Mormon Pioneer Trail, a restored Pony Express Station, and
fortifications erected by the Mormon Militia during the “Utah War” of
1857.

But with the coming of the Winter Olympics to Utah in 2002,
development in the region had reached a fevered pitch. At the request of
the state, and working with the Rocky Mountain Elk Foundation and other
groups, TPL crafted and raised funds for a conservation easement that ensures the land is never developed. The project was part of
the Utah Forest Legacy Program, a joint federal and state program that
receives the bulk of its funding from the U.S. Forest Service.