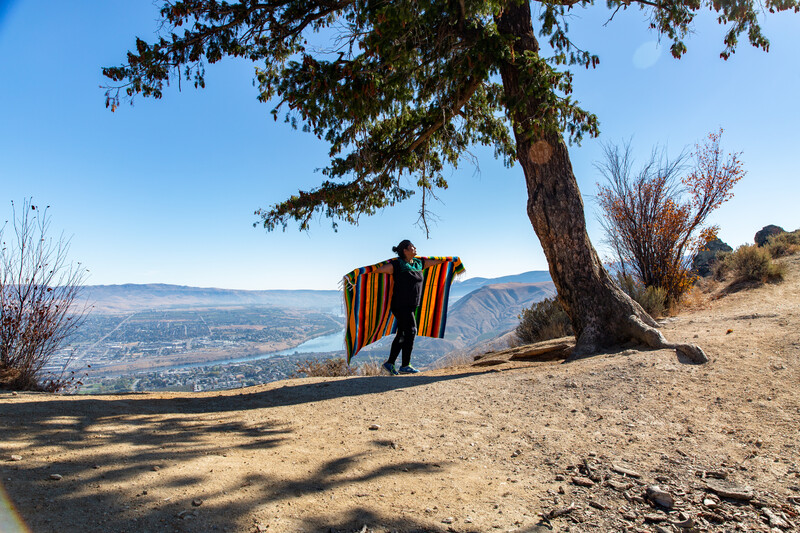 Neighbors gather around the kiosk, and children dash across the brilliantly green soccer field at Kiwanis Methow Park in South Wenatchee. Vibrant new murals adorn walls around the neighborhood, and colorful fencing in the style of Mexican papel picado lines the park.

Kiwanis Methow Park is one of the few public green spaces in South Wenatchee, a majority Latino neighborhood whose priorities have historically gone unaddressed. Until recently, the park’s patchy soccer field, netless basketball hoops, and chain-link fence invited few neighbors to the park. For many residents, Kiwanis Methow Park didn’t feel like a safe place to play.

When The Trust for Public Land learned of the need for a high-quality park in South Wenatchee, we went first to neighbors to understand what a high-quality park meant to residents of South Wenatchee. More than 500 residents participated in the visioning process to ensure that the park would reflect the priorities of the community: family gatherings, cultural festivals, and community events.

Neighbors agreed, the park needed a kiosko to host gatherings and celebrations. The kiosko echoes the central gathering places traditional to the cities of the first- and second-generation Mexican families who reside in South Wenatchee. The kiosko, or pavilion, quickly became a central feature of the park design and a rallying element for members of the Latino community.

The Parque Padrinos’ power soon reached beyond the park boundaries. Parque Padrinos members began attending city council meetings to advocate for the park. For many of the Parque Padrinos, these meetings were their first direct participation in local government. Their conversations about the park opened doors to more in-depth discussions about issues facing South Wenatchee’s Latino community — from health, housing, and jobs to discrimination and racism in the community.

The park renovation process at Kiwanis Methow Park sparked a movement, and it has no signs of slowing down. The newly renovated park re-opened in January 2020, and the Parque Padrinos will continue to activate and watch over the park for years to come. There will be basketball games, performances by Wenatchee High School’s mariachi band, birthday parties and casual gatherings of neighbors on sunny evenings. The Parque Padrinos will continue to use their voice to advocate for the priorities of the South Wenatchee community.