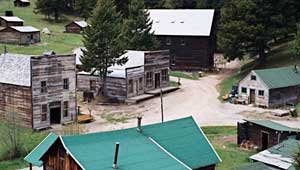 Montana’s Best-Preserved Ghost Town is a window into life at the end of the 19th Century. Built in the 1890’s at the height of a gold rush, the town’s life was brief and intense—the last store closed in 1947 in a town that had been virtually empty since the first World War. Over the years, Garnet was looted of any remaining furnishings, but many buildings survived intact.

Preservation efforts began in 1970, but by 1986 progress had stalled due to title difficulties going back generations, and landowners being spread across the country. At the invitation of the Bureau of Land Management, The Trust for Public Land took on the task of acquiring six key parcels of land, engineering a complicated land exchange that involved no less than five landowners.

In 1987, The Trust for Public Land completed the project and transferred title of the land into public ownership. Today visitors can explore thirty original buildings, including a log and frame cabin, several miners’ cabins, a store, a saloon, and the remains of the J. K. Wells Hotel. Garnet is managed by the BLM and the Garnet Preservation Association.