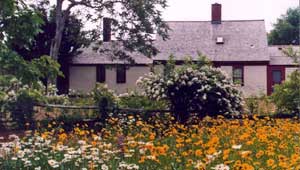 With forests and a ridge top view of Cape Cod Bay, the Biddle property is as lovely and environmentally sensitive as it is historic. The land includes significant habitat for endangered species and has been listed as a Scenic Landscape by the state. A homemade sign that hung for years in the family kitchen showed the Biddle’s appreciation for the land’s value: “The environment, conservation and historic preservation BEGIN HERE.”

For many years, the Biddle property has been wholly surrounded by Cape Cod National Seashore, one of the most visited national parks with over four million visitors annually. Eventually, the Biddle descendents felt the need to sell the compound, raising concern that the historic structures might be replaced with a subdivision or sprawling vacation homes.

In early 2011, TPL worked with the family to negotiate a substantial reduction over the original listing price and helped add the property to the National Seashore using money from the federal Land and Water Conservation Fund.