Tanisha Tucker, a member of the Tohono O’odham Nation, knows about multigenerational learning—and teaching—firsthand: from her great-great-aunt Juanita to her mother, Stella, women in Tucker’s family have harvested saguaro fruits at TPL-protected Saguaro National Park for decades.

In the middle of the day, in the middle of Saguaro National Park, in the middle of June, not much moves on the land. Temperatures in the Sonoran Desert outside Tucson routinely climb above 100 degrees this time of year, so most people (and critters) spend daylight hours keeping cool.

But not Tanisha Tucker. She’s the latest in a lineage of Tohono O’odham people who harvest the fruit of saguaro cacti growing in what’s now the Tucson Mountain District of Saguaro National Park. “The fruits usually aren’t ready until mid-June,” Tucker says. “So that means the saguaro harvest happens in the hottest time of the year.”

The towering, many-armed silhouettes of giant saguaro cacti may be one of the most recognizable symbols of the Sonoran Desert. But few people are so well acquainted as Tucker is with the saguaro’s fruits: dark red and naturally sweet, saguaro fruits have long been an important—and delicious—food for Tohono O’odham people, who’ve lived in this region for thousands of years. 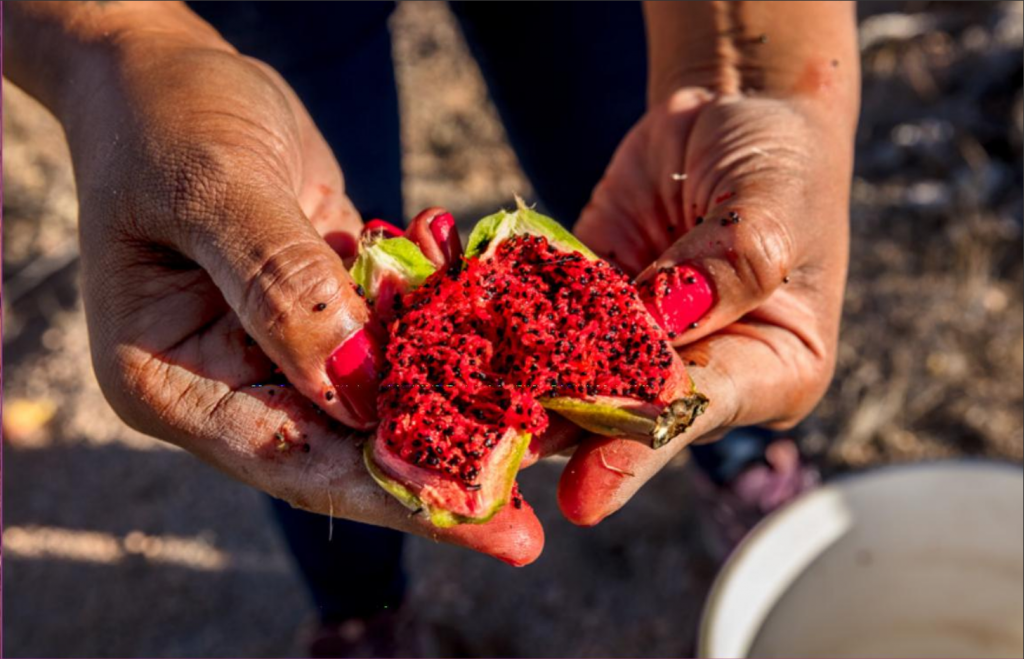 Saguaro fruit harvest season is short-lived and unpredictable, says Tucker—the first monsoons rains typically spoil what fruits remain on the limb. So as spring turns to summer each year, she keeps a close eye out for signs: the fruits start as a bud at the base of the plant’s showy, short-lived white blossoms, which sprout from the very tops of the cactus’s raised arms. “After the blooms close up, the bud goes from this tight green stage and gradually turns red. Then the pod will burst open, and you can see the fruit coming out,” Tucker says. “That’s about the time we get out there and harvest.”

To get at the fruits, Tucker uses a kuipad, a long pole made from the ribs of a giant saguaro, with a short crosspiece at one end to hook the fruits. “It’s lightweight, which makes it easier to use when you’re out there looking straight up for a few hours,” Tucker says. “Plus, there’s not really anything else in the desert that’s tall enough to reach the top of a cactus, but another cactus.” It takes some practice to get the hang of wielding the 20-foot-long kuipad accurately enough to dislodge the fruits without pulverizing them.

She uses the knife-like husk of the dried cactus blossom to scoop out the pulpy fruit within. “Then you leave your pods face-up there at the base of the saguaro,” Tucker says. “That way you’re asking the Creator to bring rain—and the more water, the more abundant next year’s harvest will be.” 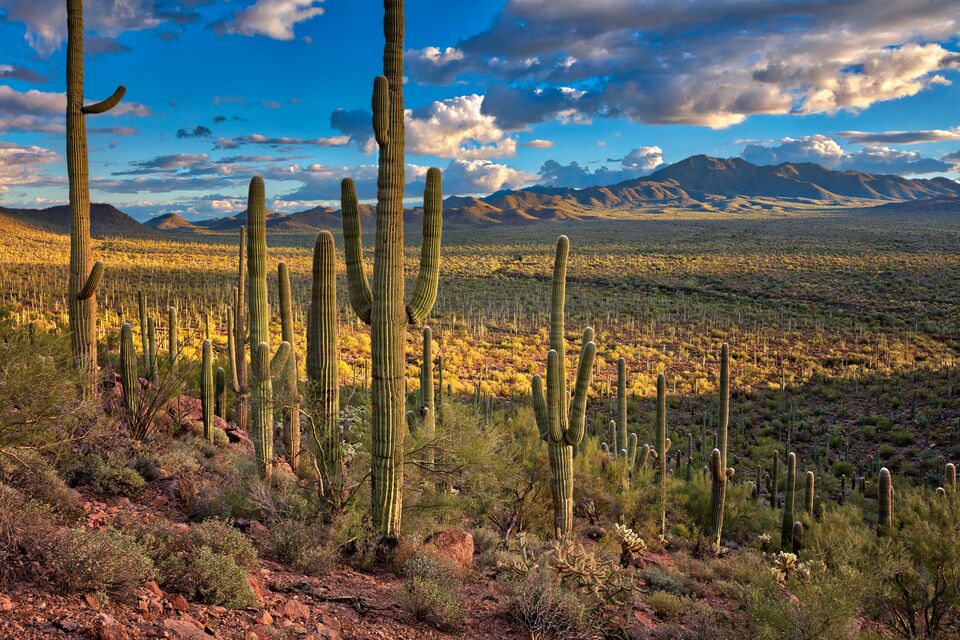 Tucker says the fresh fruit tastes great—“Naturally sweet, lots of minerals and antioxidants, like a desert superfood!”—but it only keeps for a day or two. So she preserves most of what she harvests so she and her friends and family can use it throughout the year. Tucker carries buckets of fruit back to the heart of her family’s camp, where a big pot sits over an open fire, in the shade of a thatched roof made from saguaro ribs. She’ll boil the fruit for 45 minutes, skimming debris that rises to the top, then straining out the pulp and seeds. The juice that remains cooks for another two or three hours, until it’s a thick syrup, which she pours into jars.

“You can eat it with pancakes, fresh tortillas, or have it on ice cream,” Tucker says, noting that it also makes a tasty topping for barbecue. Add water and the syrup starts to ferment, turning into a wine used for ceremonies following the harvest. The seeds, meanwhile, make good chicken feed.

Tucker says members of the Tohono O’odham Nation still harvest saguaro fruits this way throughout the cactus’s range. But nowhere else in the region can you find more of these phenomenal plants than Saguaro National Park, which covers about 150 square miles outside of Tucson. Last month we added 84 acres to the national park, marking the fourth time we’ve expanded the park, and protected saguaros and the delicate natural communities that rely on them.

The new addition isn’t far from the camp where Tucker’s family has harvested saguaro fruits every year since her great-great-aunt Juanita Ahil was young—well before this land was added to what was then Saguaro National Monument in 1961. Tucker says Juanita showed up to harvest the next summer and encountered resistance from the National Park Service. The agency’s typical rules forbade harvesting and gathering within their boundaries.

That was “frustrating,” Tucker says. “As tribal members, we’ve always seen saguaro as family, as people. That comes in creation stories and our songs. We have much respect for the saguaro. We don’t do damage or over-harvest.” So the family organized a letter-writing campaign to Secretary of the Interior Stuart Udall, who soon established rules allowing Tohono O’odham people to continue harvesting saguaro fruits within the monument.

Tucker’s mother, Stella Tucker, took on the responsibility of the harvest when Juanita passed away, and Tanisha spent many summers of her life working alongside her mom. Stella also welcomed visitors—other members of the Tohono O’odham Nation, and nonnative people alike—to the camp. “She spoke a lot, and people got to know her in the area. I love that she did bring a lot of attention to it, just to let people know: come out, harvest, this is your tradition.”

Stella passed away in early 2019. Today, Tanisha runs the harvest camp with her cousin and sister, keeping sharp on the traditional techniques. She’s also continued her mother’s dedication to teaching and sharing these traditions—and the importance of taking good care of the saguaro, and the natural communities that rely on this extraordinary plant.

“Saguaros grow nowhere else in the world,” Tucker says, noting that they live for 40 or 60 years before they even start producing fruit, and the true giants are hundreds of years old. In Arizona, it’s illegal to damage a saguaro. “We’ve always seen it as sacred,” she says. “I’m glad the law does too.”