Momentum for this new park comes from a young bike racer not afraid to go big
By Trust for Public Land
Published July 20, 2017
Spread the Word

Like a lot of high school students, Brandon Robinson had a hard time getting excited about math class. “He’d sit in the back and grumble—I could tell it just wasn’t his thing,” says Ed Raff, a teacher at Robinson’s vocational high school in Providence, Rhode Island.

Fortunately, Raff’s math classroom offered more than one way to think about figures and angles: it doubles as a workshop for the bike repair class. There, amid spare parts and tools, Brandon caught the bike bug. “After I learned about building and maintaining bikes, I wanted to see how fast I could make them go—so I started racing,” says Robinson. He joined 1 PVD Cycling, a team for Providence high school students who compete in cyclocross—a hybrid  form of bike racing that blends elements of road and mountain biking.

“I had never been big on sports—I was always nervous about my asthma,” says Robinson. “But as soon as I got out on the race course, I just fell in love with cyclocross. It even ended up helping my breathing pattern, so now I don’t get winded as often,” he says.

But as Robinson got deeper into his newfound sport—practicing three times a week and traveling to races on weekends—he found out that options for off-road riding around Providence were few. A handful of city parks have short loops and connector trails where bikes are allowed, but they’re nothing like the long trails that the team navigates on race days. “At practice, we’d hit the same spots over and over. Sometimes for drills we’d just find a field with a hill and practice running our bikes up the hill over and over again,” Robinson says. 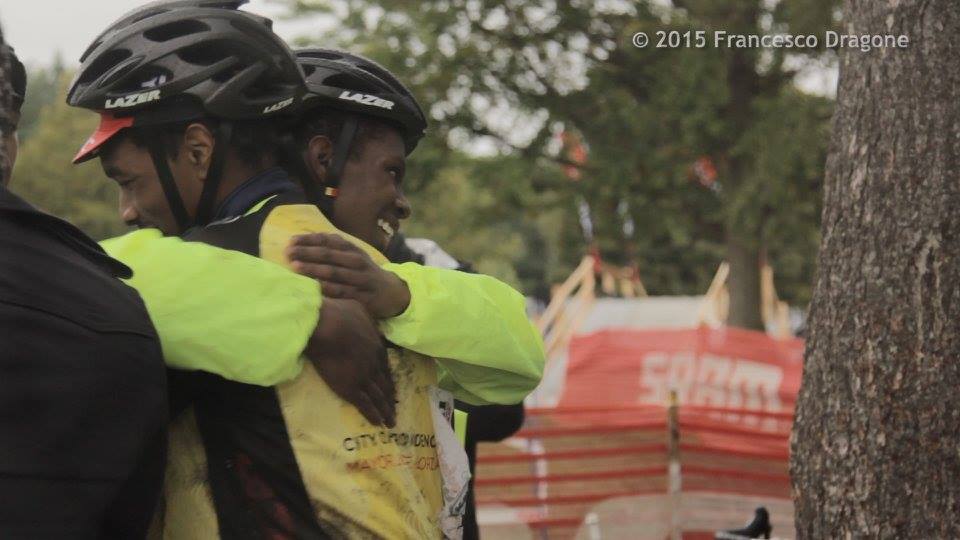 Robinson dreamed of a bigger and better place to practice—and set his sights on a stretch of scrubby trees and grass along the banks of the Woonasquatucket River. It was the footprint of an old rope factory that burned down in the 1990s, leaving four acres of polluted soil on the riverbank. Following a massive environmental cleanup, the Trust for Public Land helped the City of Providence acquire the site in 2006, and it had been sitting unused ever since.

“I didn’t know anything about what it took to build a park—I just saw a bunch of land that nobody was using, and figured we could make something cool happen there,” says Robinson. He pitched the idea to Raff as his senior project: a bike park the team could use for practices, where kids and teens from Providence’s Olneyville neighborhood—where 40 percent of people live below the federal poverty line—could hang out, try something new, and connect with nature.

“To be honest, I thought what he was proposing was probably not possible,” says Raff. “I know a thing or two about bureaucracies, and I tried to warn him about permitting and regulations and convincing officials and everything else that would have to go into a process like this.” But Raff figured it wouldn’t hurt to see how far they could get before they hit a firm “No”—so he helped Robinson set up a meeting with Wendy Nilsson, superintendent of the Providence Department of Parks and Recreation.

“Yeah, Ed tried to explain how stuff like this usually works and how he figured it was going to go,” remembers Brandon with a laugh, “But I wasn’t about to let that stop me.” Just as well: when they pitched the idea to Nilsson, she loved it. “She was no-holds-barred all for it,” says Robinson. “I really didn’t expect her to even consider it, but right away she got to talking about how she could help make it work.”

“Brandon had a great idea, so I was excited to do whatever I could to see it through,” says Nilsson. “I think it’s so important for our kids in Providence who don’t play traditional sports to still have good options for staying active, and places to connect to nature. And in particular, activities like cyclocross are great for kids learning how to take acceptable risks—which will help them in so many areas of their lives.”

The Providence parks superintendent got behind Robinson’s idea for a bike park right away. “activities like cyclocross are great for kids learning how to take acceptable risks,” she says, “Which will help them in so many areas of their lives.”Photo credit: Francesco Dragone

With the parks superintendent on board, Robinson and Raff began assembling potential park users, funders, and planners—including The Trust for Public Land—to bring the Woonasquatucket River Adventure Park to life. “We have definitely hit hurdles—right now, for instance, we’re working through some gnarly permitting issues with the site,” says Brandon. “But it’s pretty clear to all of us that this park is going to have a great impact on the community, so we’ve been pushing through any obstacles.”

Among the park’s supporters are Providence Mayor Jorge Elorza and Rhode Island Governer Gina Raimondo, who visited the site in September 2016 to rally support for a $35 million environmental bond issue, which passed by a wide margin at the polls in November. Projects like the Woonasquatucket River Adventure Park, said Raimondo, “are part of what makes Rhode Island special. It’s our quality of place.”

Before the governor took the mic, Robinson spoke to the assembled crowd of park supporters, politicians, and media to share his take on the future park. “It started as an idea. I didn’t think it was going be this big, I didn’t think this many people would support it,” he said. “It’s been an amazing thing to see this grow.”

Today, The Trust for Public Land and the Woonasquatucket River Watershed Council are working with the community to devise a park that’s jam-packed with adventure. When the park is finished next summer, BMX riders will be able to hone their skills on two short pump tracks, while Parkour athletes—or traceurs—will find a course with features for beginners and experts alike. For cyclocross and mountain bike riders like Robinson, there will be a brand-new, mile-long trail encircling the whole park.

“The way we have it laid out, there will be a big high bank at the top of the course, and then you’ll just be able to barrel down into the turn—that part is going to be real exciting,” says Brandon. “There’s nothing like it in Providence. To ride on stuff this good, we usually have to drive way out of town. Now we’ll be able to ride it every day if we want. It gives me goosebumps to think about.”

These days, Robinson is in college studying graphic design. He says thinking back about how far his idea has come makes him proud—and that he’s learned a lot about himself and the world he’s growing up in along the way. “Riding cyclocross has given me a certain outlook on life. I know there’s nothing that can’t be done—it’s just a matter of how hard I want to try, and what I want to put myself through to get it,” he says. “I draw on that all the time—working on building this park, or whatever else in life comes my way, now I know I just have to put my head down and power through.”