In fast-growing Seattle metro, the need for parks is evergreen
By Trust for Public Land
Published November 14, 2019
Spread the Word

In fast-growing Seattle metro, the need for parks is evergreen

The forested slopes of Cougar Mountain are a comforting backdrop to daily life in the Seattle suburb of Issaquah. Hitting the trail for an hour after work or a long weekend ramble through the 3,000-acre Cougar Mountain Regional Wildland Park is part of the routine here, a given, a fact of life. But a generation ago, there was no guarantee that this mountain would remain wild. It’s taken 40 years of work by conservationists assembling a patchwork of private timberland, one hard-won victory at a time. And as Seattle’s booming population growth drives up land value and spurs development around the region, places like Cougar Mountain have never been more important—or more at risk.

This week, we joined this community of conservationists gathered on the boundary of this wild land, where trim backyards fade into forests, to celebrate the latest chapter in this story: protecting 46 acres of open space which, until recently, was slated for a very different future: a luxury subdivision with 57 homes. 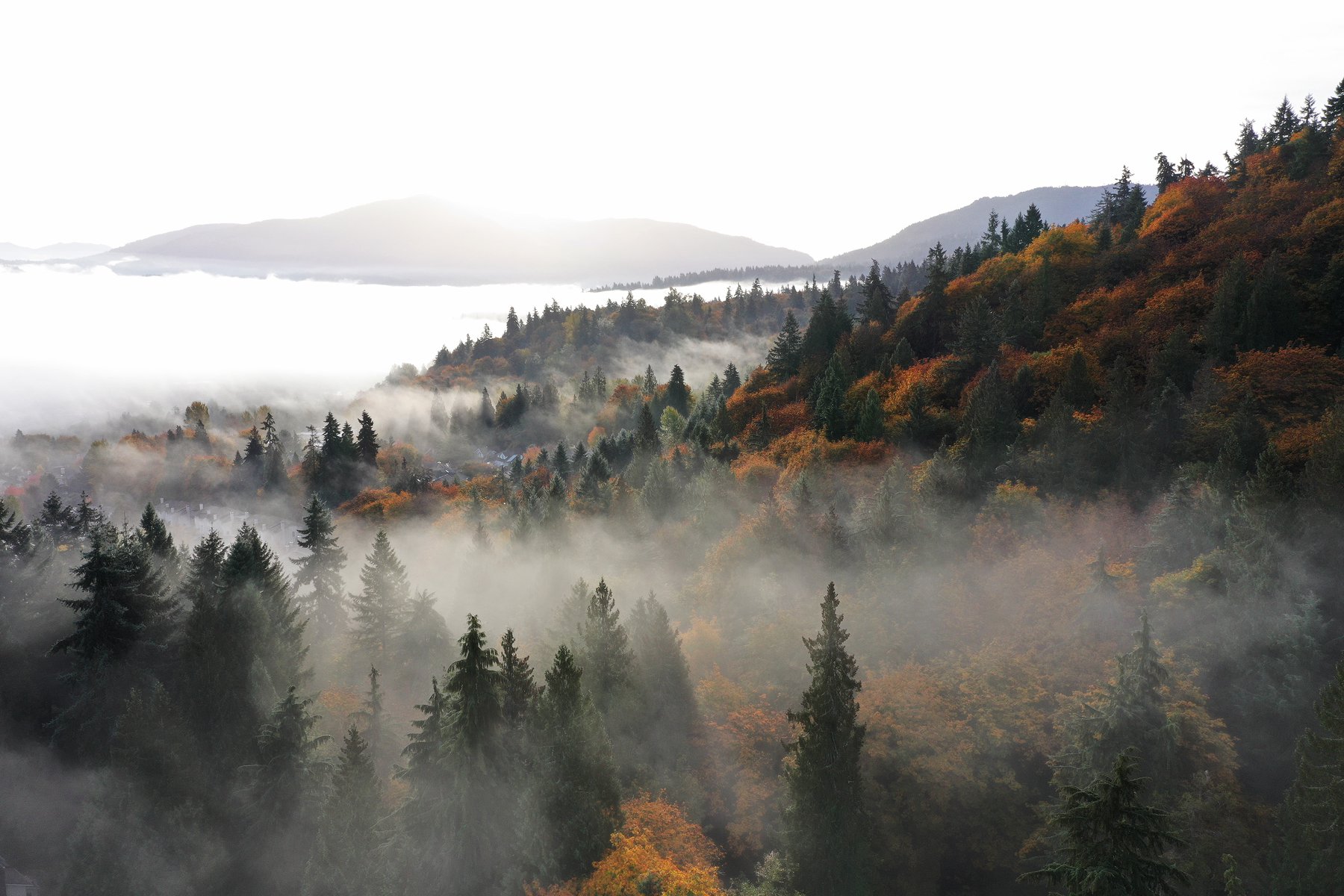 The 46-acre Bergsma property on Cougar Mountain was, until recently, slated for subdivision and development.Photo credit: Steve Cobert

Like a lot of people in Issaquah, Kay Haynes has watched with mixed feelings over the years as development has crept up on the once-unbroken forests around her town. A few years ago, she returned home after a trip to discover that the woods behind her neighborhood had been cleared and foundations were being dug for a new subdivision. “I couldn’t believe it,” Haynes said. “My heart just stopped.”

So back in 2017, when Haynes learned of plans to transform a one-time dairy owned by the Bergsma family into a luxury development, she was concerned: plans called for a new road up and over the mountain, through slopes she feared were too steep to be safely built on. “The owners of this property had been trying to develop it for years, but the project wasn’t tenable until housing values rose so much that the economics of building on such a steep slope made sense,” Haynes says.

By the time Haynes learned of the project, the developer had already guided the plans through much of the complex approvals process.  The last step was for Issaquah’s city council to approve a final environmental review. Haynes, who didn’t have much experience with community organizing, nevertheless jumped in right away, rallying neighbors and getting people up to speed on what the project would mean for Issaquah residents, and anyone who values easy access to Cougar Mountain Park. 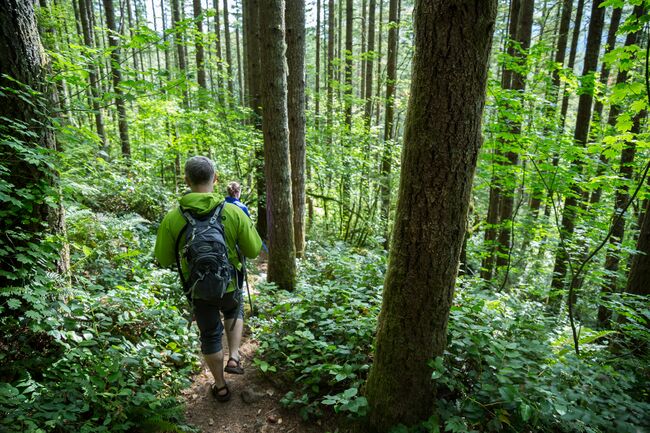 “I had no idea what I was getting into, but I knew what I believed,” says Susan Neville, who joined up with Haynes and another neighbor named Julie Clark to form the core of a group called Save Cougar Mountain. The group sought to balance equitable growth with the need to protect the same access to the outdoors that drew so many people to live there to begin with. They insisted Issaquah needs more affordable housing, and support a growth plan. “But this was not that. These were to be million-dollar houses,” says Haynes.

“Once we started digging in and learning about the development, we went, Oh my god: I can’t believe they’re building this,” says Neville. Building 57 mansions on a property with slopes as steep as 40% would require removing over 4,000 dump trucks worth of dirt—raising landslide risk, and creating a scar on the mountainside that would be visible for miles around. But if they could figure out how to protect the property, it could serve as a new gateway to Cougar Mountain Park—just a short walk from the transit center in downtown Issaquah, easily reached by bus from anywhere in the Seattle metro area.

For the next two years, Neville and Haynes devoted countless hours to the prospect of preserving this forested property for public benefit. The first step: “Getting more people involved, aware, and asking questions,” says Neville. They created a website and a Facebook page. They’d show up at public events downtown with a petition asking the City of Issaquah to acquire the land for a park.

Most folks they spoke to supported this vision, and many joined their effort to convince the city. “People would be walking by and hear us say ‘Save Cougar Mountain!’ and they’d turn on their heel and come walking back to learn more,” says Haynes.

The Trust for Public Land has been working to help Puget Sound residents protect open space for almost 30 years. Our early work here helped establish the Mountains to Sound Greenway, a corridor of protected open space stretching 100 miles along I-90, from the Cascades to the Puget Sound. In all, we’ve been part of the effort to save over 10,000 acres in the greenway, including in the Issaquah Alps (a nickname for Cougar Mountain and its two neighboring peaks, Tiger and Squak). So when they started to consider acquiring this property, the City of Issaquah turned to us for help crafting a deal.

“You can see Cougar Mountain from all around the region. Everyone who drives into Seattle on I-90 goes right past this area,” says Trust for Public Land Project Manager Sam Plotkin. “It’s one of the most iconic mountainsides in the region, and the citizens of Issaquah stood up to tell city council it was important to them.”

“We were able to bridge the divide between the City of Issaquah and the landowner, and establish a positive working relationship between conservation and development—in the hottest real estate market in the country,” Plotkin says. 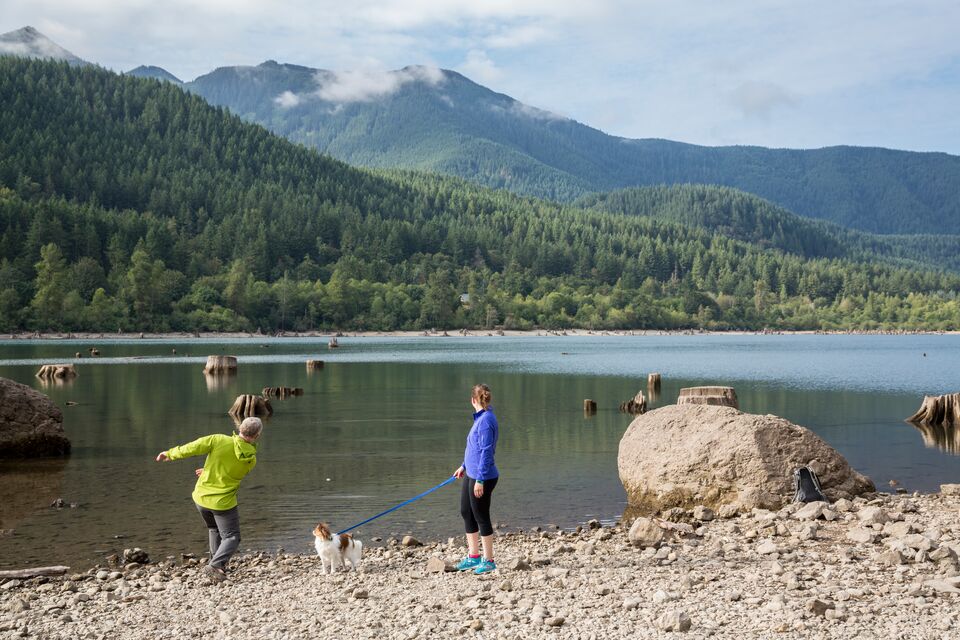 We’ve helped conserve open space in the Mountains to Sound Greenway, a 100-mile stretch from the Cascades to the Puget Sound.Photo credit: Tegra Stone Neuss

We also worked with Save Cougar Mountain to tap into the network of local activists like David Kappler, longtime member of the Issaquah Alps Trails Club. Alongside legendary conservationist Jim Ellis—who passed away last month at 98—Kappler was an early advocate for Cougar Mountain Park, going back to the 1970s.

To support more projects like Cougar Mountain, make a gift today that will be matched dollar for dollar by a generous donor. We save $5 worth of land for every $1 you donate. And thanks to this matching gift offer, we can now do twice as much—that’s $10 worth of land  saved for every dollar donated.
Donate Now

“Preventing this development was a long shot,” Kappler says, citing the land’s expense, its proximity to town, and how far along the plans were by the time Save Cougar Mountain formed. “We’ve had our eye on it for almost 40 years, but had never been able to assemble a deal for its protection. I guess you could call this a high-hanging fruit that nobody’s been able to get.”

With friends like Kappler, Save Cougar Mountain figured out how to make their case to city leaders and the media. “They would say, oh no, don’t do those three things, that won’t give you any traction, have you thought of that? Look at this, here’s the code behind that, here’s how to understand the issue,” says Haynes. The group brought that knowledge to dozens of meetings with city and county officials and other decision makers. “Council members have so much on their plate,” says Neville. “So we took it as part of our job to help educate them about the real risks and opportunities around this property.” 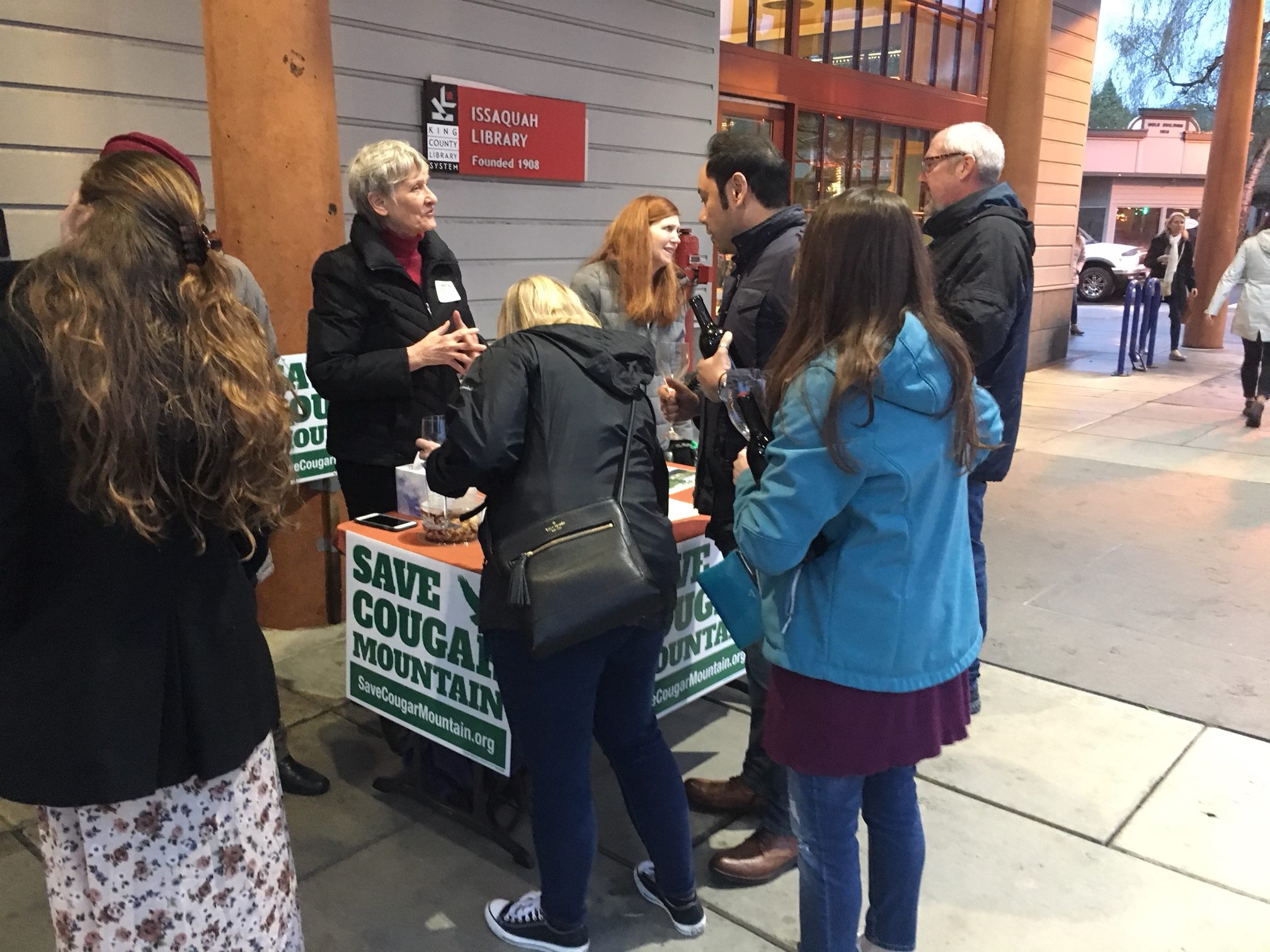 Along the way, the pair admits that their determination might have tested some people’s patience. “We really just did not give up,” says Haynes with a laugh. But throughout, they sought a mutually beneficial solution, and treated everyone with respect. “There’s a respectful way to go about things, even when you don’t hold the same view.”

Eventually, all the hard work paid off: In December 2018, the Issaquah City Council voted to purchase 33 acres of the property. (King County acquired the remaining 12 acres as an addition to Cougar Mountain Regional Wildland Park.) The Trust for Public Land provided a $3 million loan to the City. Since then, Issaquah has been raising grant funds to cover the $11 million price of the property. As of this week, the City is halfway to its goal.

Leading up to the council’s final vote, “You couldn’t drive through Issaquah without seeing a ‘Save Cougar Mountain’ sign,” says Plotkin. “This was a really good example of democracy, where citizens organized and urged elected officials to do something important to the community. It wouldn’t have happened without that energy.” 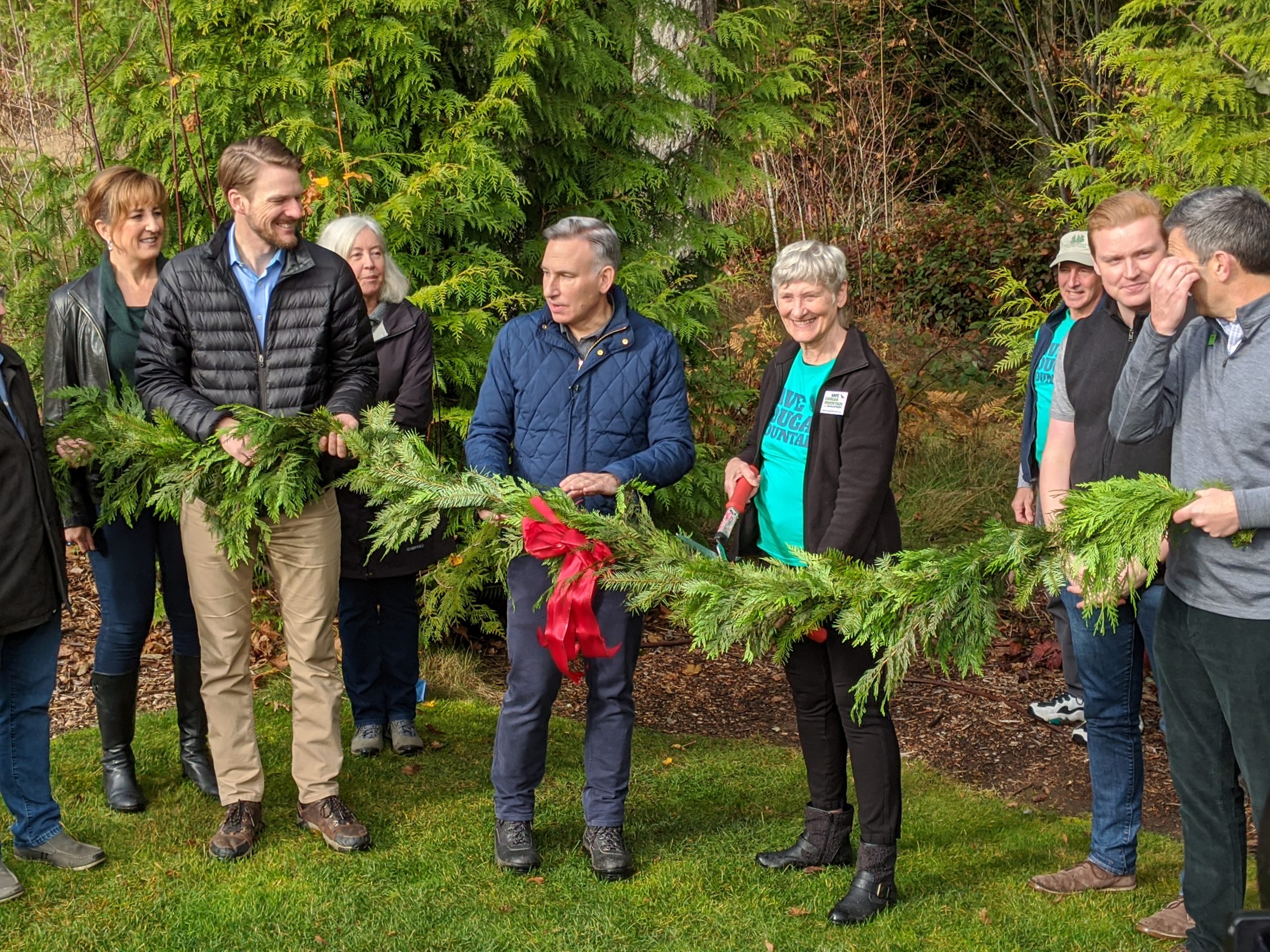 This week, we gathered with Save Cougar Mountain supporters on the recently protected property to celebrate an important milestone: the City of Issaquah has raised half the funds is needs to cover the cost of the land.Photo credit: Sam Plotkin

Which is why we gathered with Neville, Haynes, Kappler, and dozens of others on the newly protected property this week, to celebrate their remarkable victory—and keep in touch for battles to come. Because now that they’re experts, Save Cougar Mountain leaders find themselves in high demand. Within a few weeks of the city council’s vote last year, “We started getting requests from other groups of people who want to do something similar in their communities,” says Haynes.

So what advice do these organizers offer for someone who wants to make a difference in their community? After everything they’ve learned and all they’ve accomplished, it boils down to: just show up, and bring an open mind.

“I’ve heard so many people say, ‘Oh I feel so strongly about this issue, but I don’t really know how it works,’” says Haynes. “But before you know anything you have to be willing to step up and share what your concern is.” 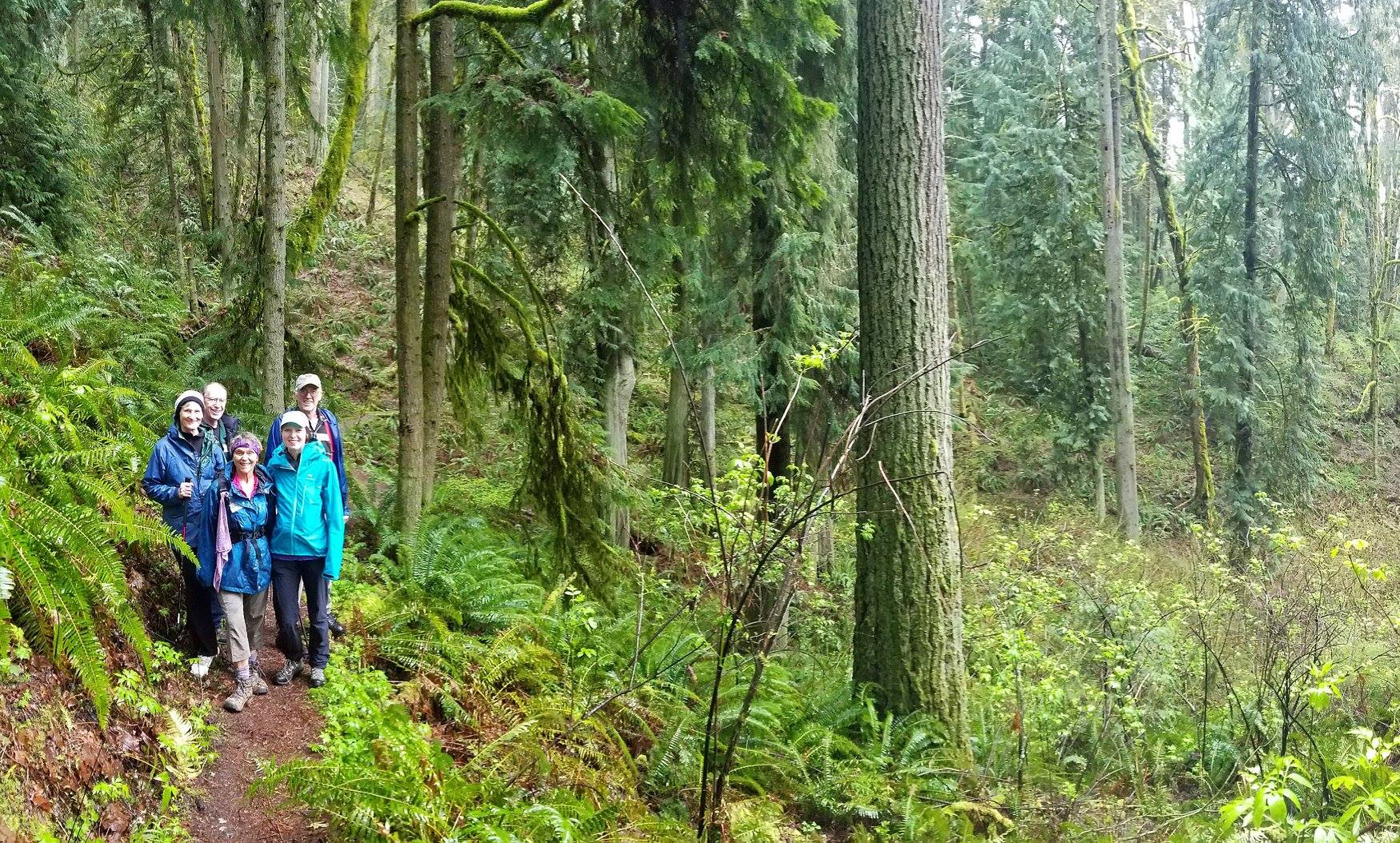 “A big part of our success in convincing people to conserve these lands is to help them experience them,” says David Kappler, who’s promoted trails and open space around Cougar Mountain since the 1970s.Photo credit: Save Cougar Mountain

Neville says some of the most memorable input about this effort came from members of the community who showed up to speak at city council meetings. They recalled when two kids stood up, “too short to even see over the podium,” and asked representatives to save the green space because they liked to hike there and it was very relaxing.

“It’s okay to not know,” says Haynes, “Our allies didn’t need to be up to speed on the details to be able to express their heart relationship to the mountain.” 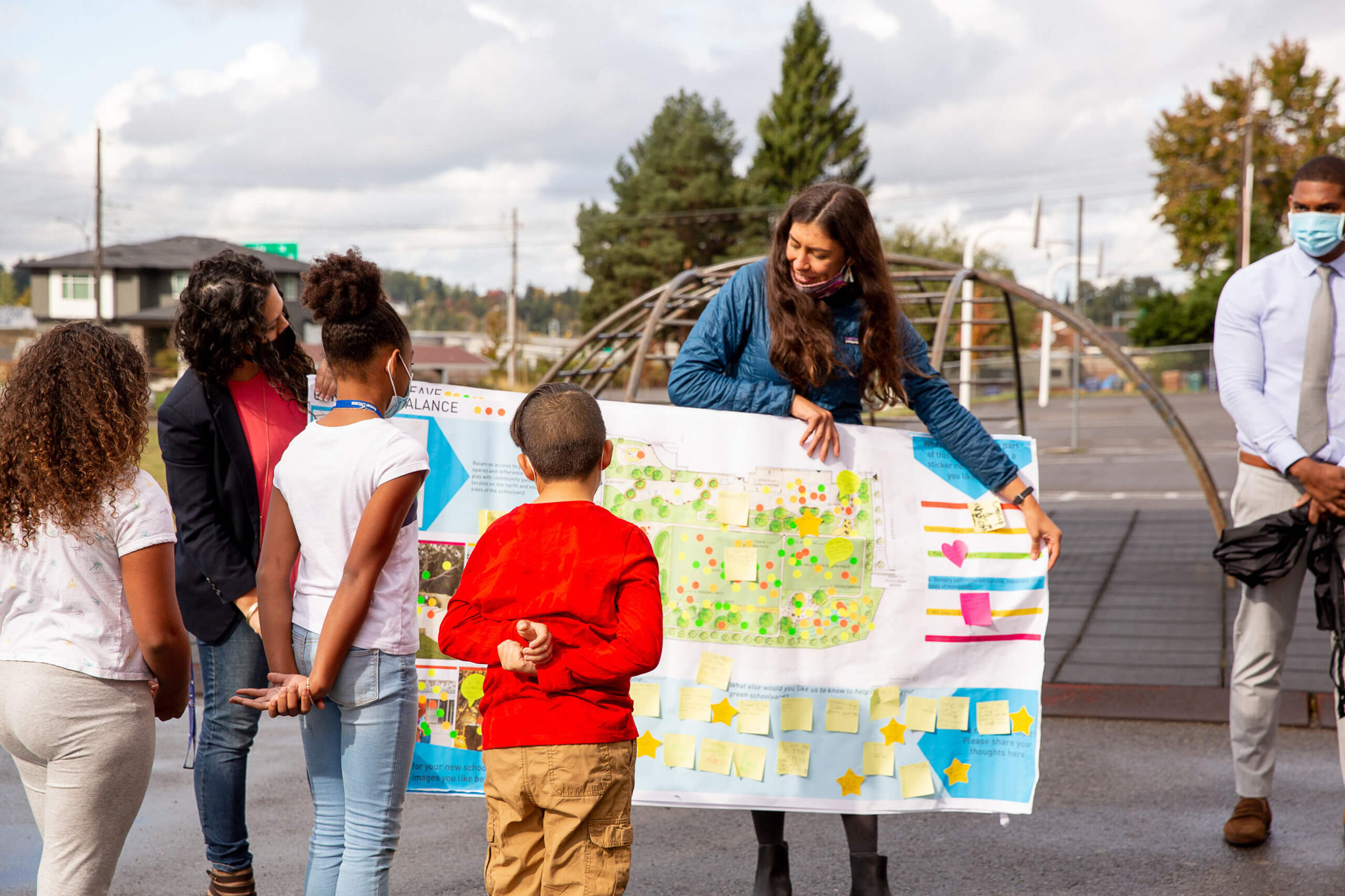