Great Strides
Liz Thomas knows how to navigate the wildest, most remote places on earth. 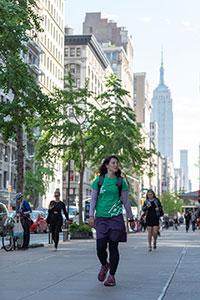 A veteran of dozens of long-distance wilderness hikes, Thomas set a speed record on the Appalachian Trail and has gone on to make her living as a trail expert, author, and conservation advocate.

Along the way, she’s become a leader in the small but growing subculture of urban thru-hiking. She’s trekked hundred-plus-mile routes through Los Angeles, San Francisco, Portland, Seattle, and Denver … and this year, she took on her biggest challenge yet: New York City.

I like to see places by foot. Hiking is about discovery and the excitement of what’s next. Three miles per hour is a speed where I can stop, chat, and really take the time to connect to a place—its topography, history, and people.

In recent years, the focus of my wanderlust has shifted from high, lonesome trails to bustling city sidewalks. Just like the Appalachian Trail connects scenic highlights, to give my city treks some structure, I’ve planned my urban hikes around a theme unique to the metropolis I’m visiting. I once walked a 150-mile route connecting all the public stairways in San Francisco, and I covered 100 miles linking all the breweries in Denver.

Still, there was one place that I’ve been wary to approach on foot: New York City. I’ve always been intimidated by the Big Apple. It was too crowded, too confusing—too much. Plus, there’s one reputation it doesn’t have: green. I didn’t expect to find very much of the natural world remaining in a city so thoroughly charted and claimed by humans.

But when I looked into it, I learned that nature is abundant in New York. More than twenty percent of the city’s land is used for parks and recreation. Nature is almost everywhere throughout the five boroughs … with the exception of the one place the city’s youngest residents are required to be: schoolyards.

As I researched New York, I started to wonder: Why did turn-of-the-century architects design schoolyards as if they were big-box store parking lots? Why are kids fenced into asphalt lots that look more like prison yards than play areas? As a wilderness trekker, I know just how restorative, calming, and healing it can be to leave the pavement and soak up nature. What must it feel like to be a kid and not have that choice to make?

Hiking gives me deep appreciation for the decisions and actions of those who have come before me. In the wilderness, I’m grateful for conservationists who protect our natural environment. When I’m exploring a city, it’s the urban planners and community organizers who make the city a safer, cooler, more pleasant place to live and play. Turns out, hiking can be a form of political expression. Maybe I could use a trek through New York to create a conversation about who does and doesn’t get access to parks.

“In recent years, the focus of my wanderlust has shifted from high, lonesome trails to bustling city sidewalks.” 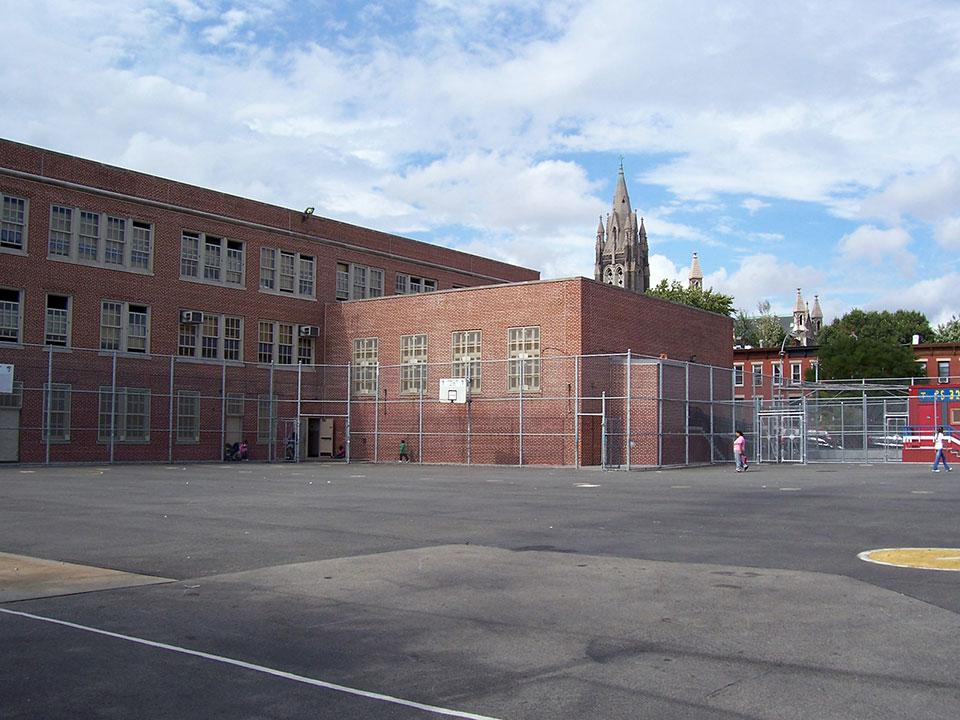 On the first warm day of spring, I started my hike at the yard of P.S. 32 on Staten Island,

where The Trust for Public Land helped students and neighbors dream, design, and build a brand-new schoolyard. It’s one of the more than 200 sites in New York City where the organization has helped transform asphalt lots into vibrant, green, public parks.

The day I visited, the playground was still under construction, so it wasn’t much to see: blacktop rubble all jackhammered apart. But by the time I had walked to the seventh schoolyard later that day, I realized I had witnessed one stage of a complete transformation.

In the coming days, I’d pass many public schoolyards in need of a little transformation (or a lot). Most were blacktop. No trees. No gardens. No color. No personality. Nothing that gave you an idea of the school, the neighborhood, or its people.

But each playground rebuilt by The Trust for Public Land is unique, with murals and gardens and sports fields and equipment designed for and by the people who use it most. Over the nine days of my trip, I’d visit a hundred of these playgrounds. I’d see their beauty through a child’s eyes. Because it’s actually the kids who design these parks.

Students, teachers, and neighbors weigh in on almost every aspect of their future playground. Kids in the Bronx chose a soccer field. Another school in Brooklyn went with a human-sized chess board. I walked through NASA-themed playgrounds. Castle-themed playgrounds. As I entered each schoolyard, colorful murals welcomed me, proudly declaring: “This playground was designed by the kids of P.S. 90.” 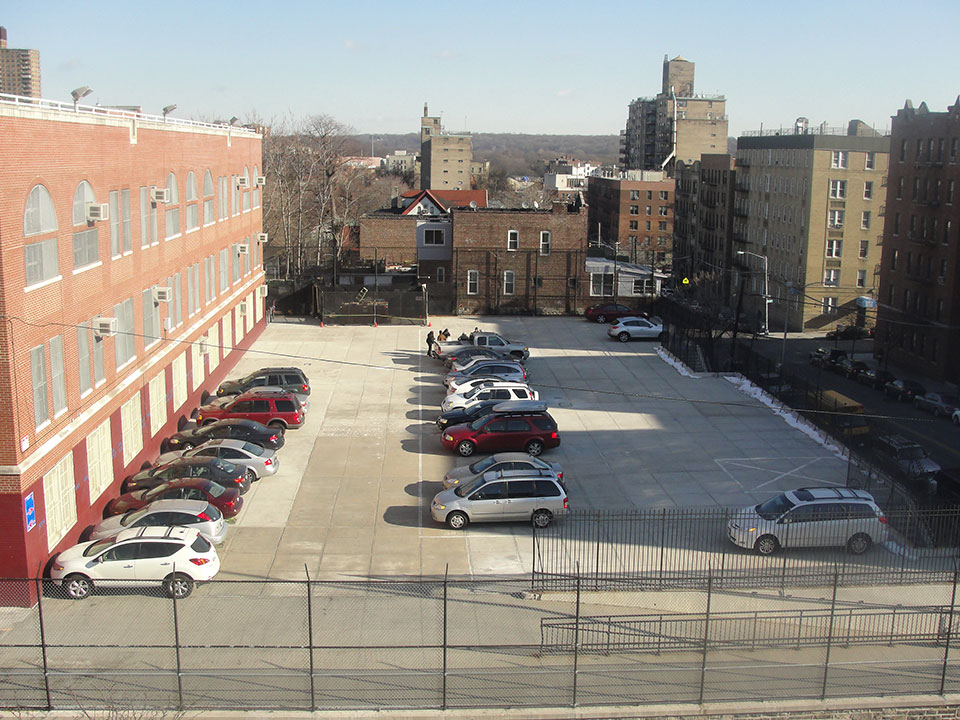 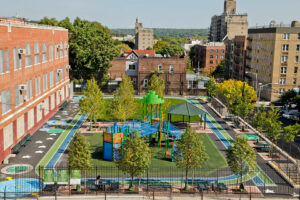 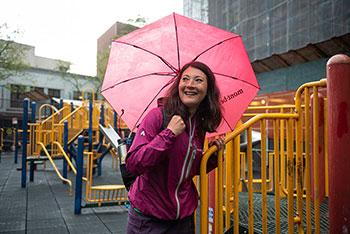 At the end of my third day, I watched a dad balance his five-year-old daughter as she pedaled around the track at P.S. 130 in the South Bronx. It reminded me of one of my earliest memories: teetering on training wheels at my school’s basketball courts. So many years later, my stomach still drops at the thrill I felt when Dad let go of the bike. Defining moments in life are made in parks.

I wouldn’t be the athlete I am today had it not been for my local park. I visited national parks a handful of times as a kid; my memories of those trips are dominated by the inordinate amount of time in the car it took to get there. But it was the park down the street from my house that nurtured a lifelong love of mud and trees. As teenagers, we organized a barbecue in that park—far (but not so far) from the prying eyes of our parents. Now, my best friend strollers her kid through that same park.

In New York City, opportunities for kids to create memories like these aren’t a given—especially in neighborhoods where good parks are far apart and most people don’t have cars. “I remember being taken to the library, the doctor, and the dentist,” said a New Yorker I met named Misty, who grew up in Queen’s Village. “I have no memory of any park.” The Trust for Public Land’s work is changing that. It’s creating a space people want to be. A place kids will want to remember. 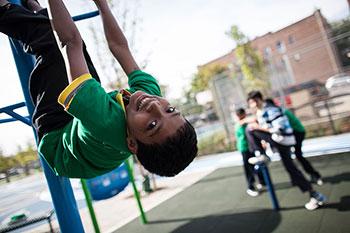 I saw how the playgrounds and schools make the mood on the surrounding streets feel somehow optimistic.

Each morning, I hurried to keep up with moms and dads bustling to get kids to school on time. (I have a speed record for one of the most demanding trails in the country … but New York is the first city where I struggled to keep up with the locals.) Holding hands, families walk with hope and purpose.

The teachers I met taught me that the new playgrounds have all sorts of great side-effects. “Before school I see students playing basketball, running on the track, sliding down the play equipment, or just sitting on the benches talking,” said Paul Turci, the science teacher at P.S. 66X in the Bronx. “I believe the playground encourages more students to arrive early and it helps increase attendance.”

Bored kids are more likely to bully or start fights, according to an after-school teacher in Harlem named Zoe. Playgrounds give kids something else to do. I watched kids plant strawberries and lemon sorrel in Harlem. I marveled at kids “trail running” (okay, maybe playing tag) on a shrub-lined rock path in the Bronx.

And it’s not just the students who benefit. “It boosts my mood to see kids getting together to have fun and exercise before the school day begins,” Turci said. “I feel proud that our school can offer this opportunity to the community.” 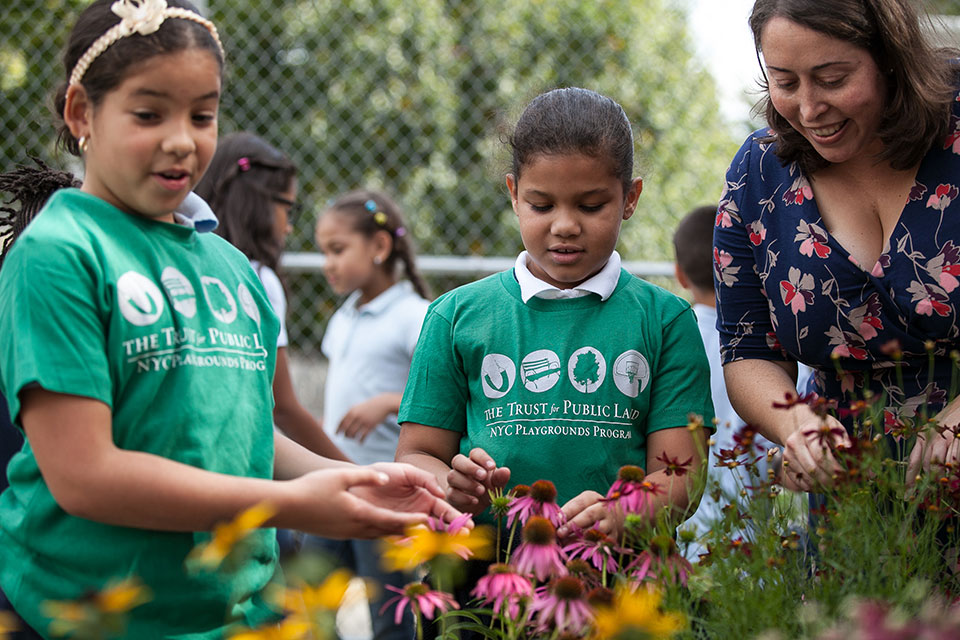 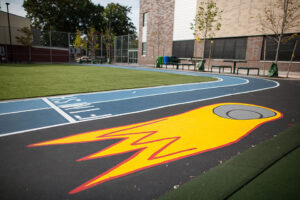 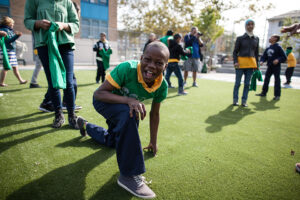 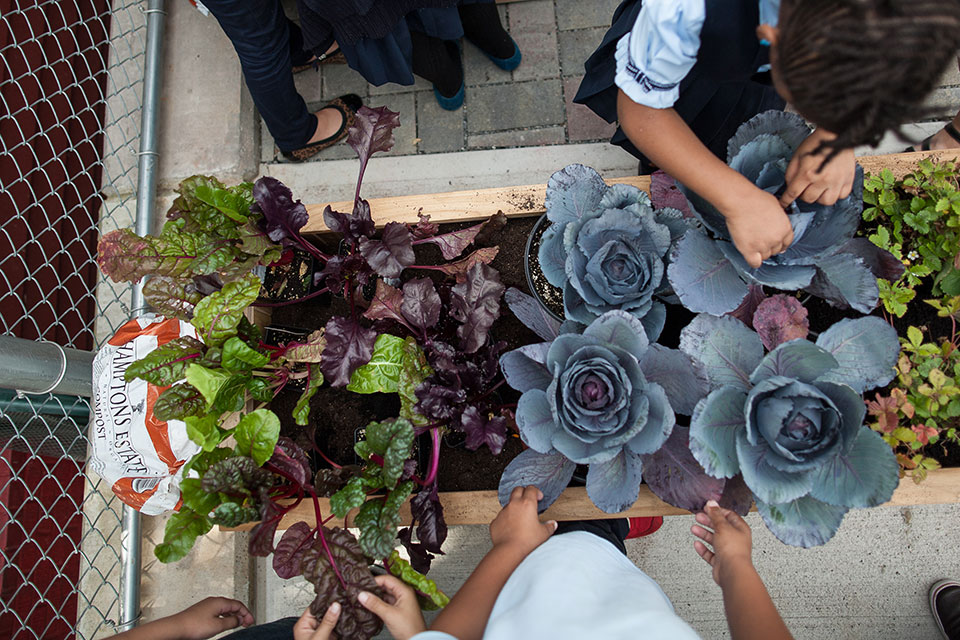 On a sunburn-inducing Saturday, the fourth day and a hundred miles into my trip, I stumbled into a festival at a playground in Long Island City.

There were all the makings of a good fair: face painting, a popcorn machine, and a raffle for movie tickets. Adults were selling handmade soap and jewelry. I bought Thin Mints off some fifth graders in patch-covered vests.

Schoolyards The Trust for Public Land creates in New York are open to the public outside of school hours. In some parts of the country—like where I grew up in Sacramento—that’s not such a novel idea. But here, I walked past too many locked-up playgrounds. In a city where space is a commodity, these community schoolyards become places where people can stretch out and be themselves. 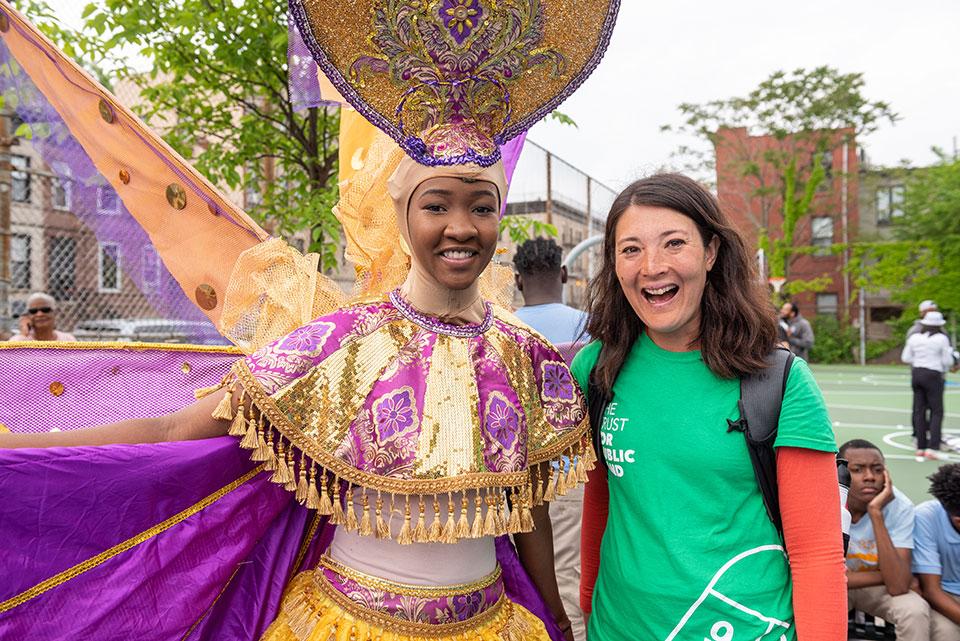 “Apartments have us all cramped up,” said a Brooklynite named Lauren as we hiked through her neighborhood. “Most of us don’t have a rooftop, never mind a back or front yard or private garden space, so the public parks close to home act as a sort of shared backyard.”

By my fifth day, now deep in Queens with 125 miles of hiking complete, I began to appreciate another important function of parks: restrooms. City parks made up eighty percent of my pit stops. (Believe it or not, New York City’s park bathrooms are among the cleanest I’ve found in the country.) I walked for upwards of 12 hours each day, so I found myself paying very close attention to the distance between parks.

In New York City, 99 percent of residents have a park within a 10-minute walk of home, which is really saying something considering that the national average is only 54 percent. But I’d discover that just because a park exists on a map, that doesn’t mean it’s doing its job. On my hike, I witnessed major differences in park size, distribution, and amenities between neighborhoods.

It’s true that you can find nature in every borough. But my trek took me far off the tourist track, away from neighborhoods known for marquee destination parks like Central Park and the High Line. Although I deliberately planned my route to pass through as much green space as possible, many communities I walked through were made up of nothing but cement and more cement.

It was these treeless neighborhoods that stick out most in my memory. Heat radiated off the asphalt, meaning hiking through some parts of the city felt as toasty as the days I’ve spent trekking through a desert wilderness. Each time I reached a cool, green park, I was so grateful it was there. Walking through a park gave me a sense of relief, like finding an oasis in the desert. 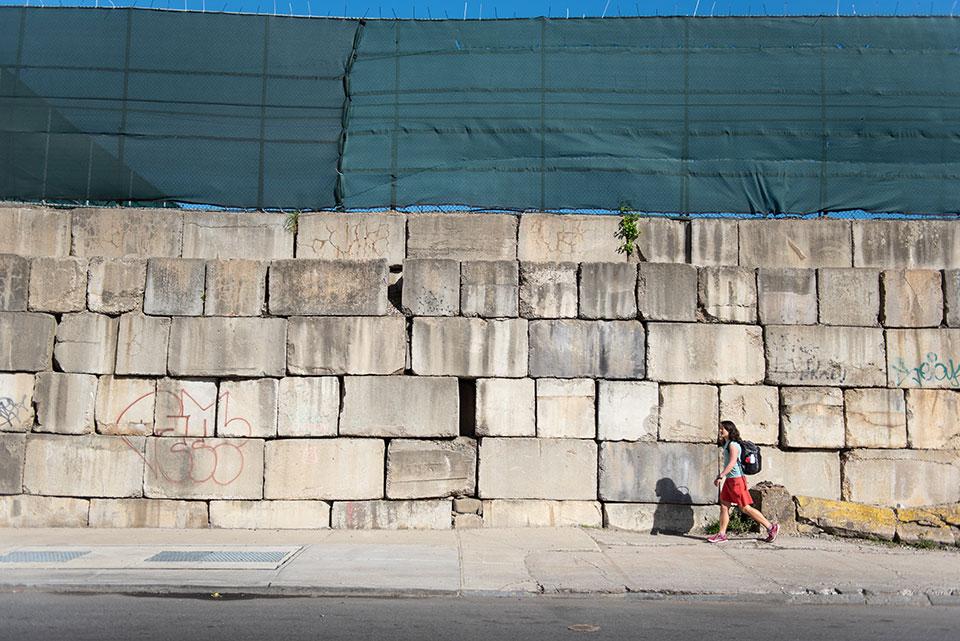 “This was a barren piece of land with broken-down basketball hoops and a single paved area for play,”

Rita Mason told an audience at the opening ceremony of the new playground at her school, M.S. 354, on my last day of the hike. “Now we have turf for playing sports, a track for running, two half-court basketball courts, an amphitheater, and places where we can read a book, or just sit, talk, and relax with our friends.”

I was there alongside hundreds of students, parents, neighbors, and other celebrants. These were all people who cared about this place. People who wanted and fought for a playground in their neighborhood.

Something as simple as greening schoolyards comes with such a positive ripple effect. Parks are essential not just for the body and mind, but for meeting others and creating community wherever you are.

As I visited more schools, I began to cherish the afternoons when class was out of session. That’s when the gates flooded open and kids frolicked with abandon. It’s when grandpas and moms with toddlers and all sorts of neighborhood folks could meet, gossip, and relax in the schoolyard. I chatted with one such mom outside a school fence in Brooklyn on day eight of my hike. “I’m waiting,” she told me. “The park opens at three.” 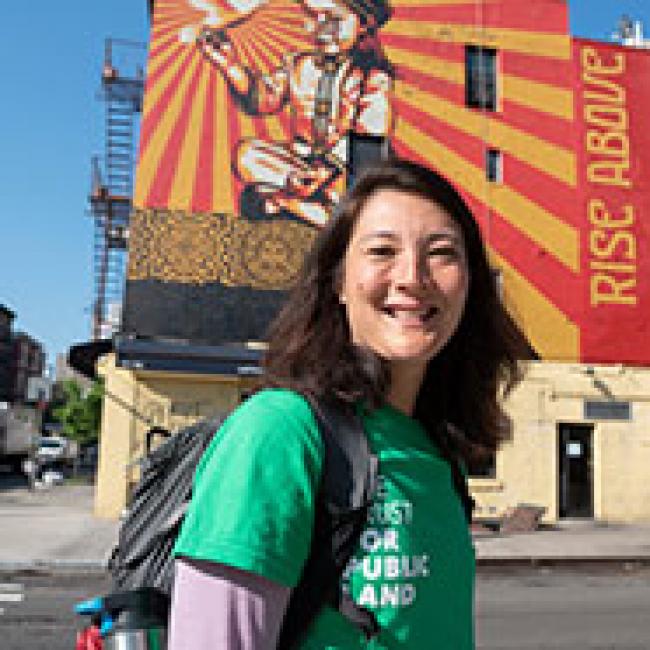 Liz Thomas
eathomas.com
Liz Thomas has backpacked over 15,000 miles across the United States. In 2011, she broke the women’s unsupported speed record on the 2,181-mile Appalachian Trail. She’s an author, speaker, conservationist, and coach. When not hiking, Liz splits her time between Denver and Los Angeles.