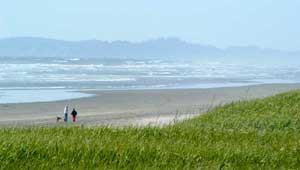 Love of the land and passion for protecting it were traditions in the family of Norman Yeon, who died in January 2004 at the age of 88. In 1885, Norman’s father, John Yeon, left Canada to settle in Oregon, where he worked as a logger for $2.50 a day. Discovering a talent for business, he succeeded in lumber and real estate and became a millionaire by the time he was 40. He passed on considerable wealth to his children, Norman, John, and Pauline, along with an appreciation of the land and its natural resources.

In 1962 Norman purchased 110 acres at Sunset Beach on the Oregon coast. Located at the end of a public trail from the national historic site Fort Clatsop—where explorers Lewis and Clark once spent the winter—this property is one of the largest pieces of natural land left on the Oregon coast.

For more than 40 years, Norman spent summers at the Oregon coast property. He restored native plants; created a refuge for deer, elk, and other wildlife; and steadfastly refused to sell the property for development. And when he died, he left it to The Trust for Public Land, ensuring that it would remain protected and open to the public forever. In 2009 TPL fulfilled his wish, transferring his Sunset Beach land into the care of the National Parks Service and Oregon Parks and Recreation Service