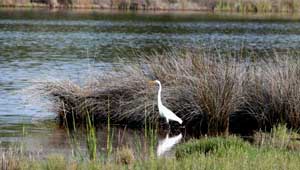 Beaufort County is a maze of low-lying islands, marshes, forests, and coastal farmland. But it is also the fastest-growing county in the state, and residents and governments have been working for years to preserve open space. Widgeon Point, at the south end of Lemon Island, is one of dozens of sites conserved since 2003, when TPL contracted with the county’s Rural and Critical Lands Preservation Program to buy land and easements for conservation. Twice in the last decade, county residents have overwhelmingly passed conservation bond measures-$40 million in 2000 and $50 million in 2006-to fund the program. The 162-acre Widgeon Point property includes more than 50 acres of upland forest, a pond, and a saltwater marsh. Up to 130 houses could have been built on the land, which instead will become a destination for kayakers and may be used to house a county environmental education facility. TPL partnered with the Beaufort County Open Land Trust to complete the project.