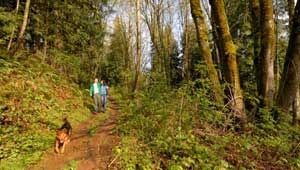 Waterleaf, a 26.85-acre parcel of forest and meadow on a butte top in Southeast Portland, is an early example of the Intertwine Alliance’s efforts to build the world’s best park system for the people of the Metro region by connecting the community to its parks, the parks to one another, and the resources of every jurisdiction to a shared vision.

That’s because it lies at the headwaters of Johnson Creek a free-flowing stream that runs through an essential watershed for some of the most densely populated areas of Portland, Gresham and Milwaukee. Johnson Creek is home to salmon and prone to flooding. With different jurisdictions, and even different departments within jurisdictions, all having a hand in its management, a lack of well organized, comprehensive oversight was a cause for concern. At the apex of the housing boom in Oregon, the Waterleaf property was development—ready for a 65-home subdivision threatening a vital storm water buffer for the entire watershed.

In 2007, as housing prices began to fall, with the help of local government, other nonprofits and community leaders, TPL entered into negotiations with the owner/developer to buy the land for conservation, helping to conclude a 10-year acquisition program that includes over 20 miles of the Springwater Corridor. The land was transferred to Metro in April 2008.