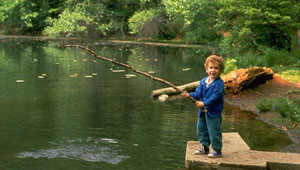 Walden, or Life in the Woods, Henry David Thoreau’s account of his two years at Walden Pond, became the classic American statement on the powers of straight thinking, simple living, independence, and wild retreat. While Walden Pond has long been protected as a state park, much of the Walden Woods has remained in private hands. When these woods were threatened with condominium and office park development in the early 1990’s, The Trust for Public Land worked with the Walden Woods Project and the Commonwealth of Massachusetts to permanently protect more than 85 acres, including Bear Garden Hill, where Thoreau took moonlit walks. In 1995, we helped acquire an historic home at the edge of Walden Woods as a library and research center for the Thoreau Institute, which promotes the writer’s work and legacy.