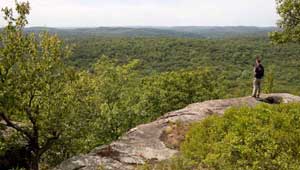 Legend has it that General George Washington lost his watch on Torne Mountain while spying on British troops during the American Revolution. No one knows where this happened, but today’s visitors to Harriman State Park can daydream about finding the watch as they hike to the mountain’s summit through 495 newly protected acres overlooking Ramapo Pass. TPL partnered with the state and Rockland County to conserve the historic landscape around Torne Mountain forever and put to rest plans for the land’s development. In addition to its history and value for recreation, the land encompasses the Ramapo River basin, which provides drinking water for two million people in Rockland County and northern New Jersey. It offers habitat for red-tailed hawks, great blue and green herons, foxes, coyotes, black bears, and protected timber rattlesnakes and ospreys.