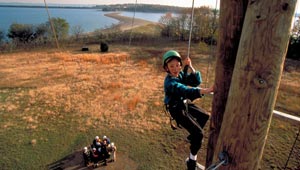 Thompson Island was the last privately owned island in Boston Harbor when TPL helped protect it in 2002. Its conservation completed a 20-year effort to restore the harbor islands to the public for recreational use. TPL worked with the National Park Service and the Massachusetts Department of Environmental Management to purchase a conservation and public access restriction over Thompson Island, which today is part of the Boston Harbor Islands National Park. The island’s 240-acres are owned and operated by the nonprofit Thompson Island Outward Bound Education Center, and lie roughly one mile from Boston’s John F. Kennedy Library. Thanks to the leadership of the Commonwealth’s congressional delegation, especially the late Representative Joseph Moakley, Congress appropriated $2 million for the purchase, which was matched by $2 million in state funding.