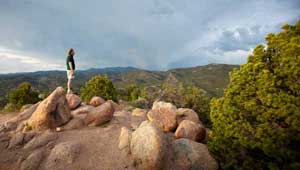 Sun Mountain provides an iconic backdrop for Santa Fe and is a favorite hiking
destination within the city limits–the property, known as the Watson Estate, has been popular among hikers
ever since the Watson family began allowing public access here in the
1930s.  When 23 acres on the mountain’s western
flank were slated to be carved into a dozen large home tracts, the community
rallied to save this special place and asked TPL for help.

In the Fall of 2009, working closely with
residents, the landowners, and the city, TPL crafted a consensus solution to
preserve the land and raised $3.2 million needed for its purchase.  Roughly half
of the land will remain private, protected by a conservation easement that
limits future development to just two homes, while trails on that land will
remain open to the public. Protection of the other half as city-owned open space
creates hiking access to the summit for the first time.