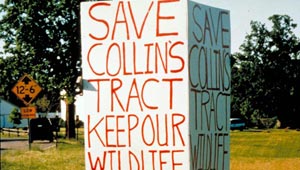 Arnold, Missouri is nestled in the foothills to the Ozarks at the outer edge of the St. Louis metropolitan area. Near the heart of the city, 119 acres of pristine forest and high plateau overlook the Meramec River Valley. The land—also known as the Collins Tract—was the only large undeveloped site in the city, offering habitat for deer, wild turkeys, hawks, and pheasant. Developers had applied for approval to subdivide the land into more than 250 housing sites. Concerned citizens organized in opposition and turned to TPL for assistance in acquiring the property, which they did in 1997.