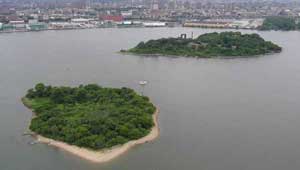 South Brother Island and neighboring North Brother Island provide a natural habitat for herons and other water birds in an incongruous stretch of water between the South Bronx and Queens, with Riker’s Island to the east and Randall’s Island to the west. Both islands share a rich history and prime location, and in 2007—with TPL’s help—South Brother joined North Brother as a sanctuary run by the New York City Department of Parks and Recreation. Support for the conservation project came from U.S. Congressman José Serrano, in partnership with the National Oceanic and Atmospheric Administration. Through the Coastal and Estuarine Land Conservation Program, Congressman Serrano was instrumental in securing federal funding to protect the property.