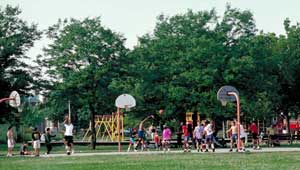 In 1989, The Grand Truck and Western Railroad announced plans to develop approximately 13 acres of a former railroad yard in a predominantly blue-collar neighborhood on southwest Chicago—an area significantly underserved by parks and open space. The land abutted tiny Senka Park, one of only two parks in a sprawling district of brick bungalows and walk-up apartment buildings. Almost as soon as the railroad announced the development, neighbors asked local aldermen to block the project and help make the land a park. The Chicago Park District wanted to acquire the land, but needed assistance. At the city’s request, TPL optioned the former rail yard and transferred it to the park service over three years. The expanded Senka Park opened in 1999 and is a center of community activity.