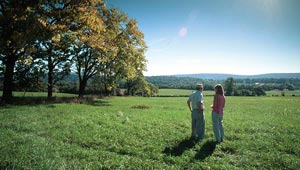 The area around Harpers Ferry is rich in American history and scenic beauty. In recent years, conservation and historic preservation groups have worked to protect Civil War battlefields around Harpers Ferry by adding them to Harpers Ferry National Historical Park. One of the most historic and beautiful of these is School House Ridge, where, on September 15, 1862, Confederate General Stonewall Jackson accepted the surrender of 12,500 Union troops, the largest capture of Federal forces during the entire war. Since 2003, TPL has helped add nearly 170 acres of the School House Ridge battlefield to the national park.