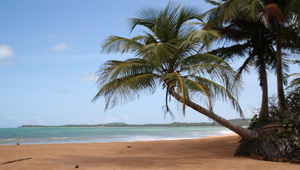 Located in the northeastern coastal town of Luquillo just 25 miles from the capital city of San Juan, the San Miguel Natural Reserve has broad beaches, magnificent sand dunes, and beautiful wetlands that support a variety of complex ecosystems found nowhere else on the island. The combination of San Miguel’s undeveloped shoreline, forest slopes, and wetlands make this a prime habitat for a rich assortment of plant and animal species. The reserve’s beaches are one of the most important nesting grounds for the endangered leatherback turtle, the largest in the world.

This critical habitat was once slated for a large-scale resort and two golf courses. But strong public opposition to the potential destruction of endangered species habitats, created an opportunity in 2007 for TPL to purchase an initial 270 acres for protection as a natural reserve. Since then, TPL has continued its efforts in a multi-year approach to protect other contiguous lands, expanding the reserve in 2009 through acquisition of an additional 142 acres. A recent TPL purchase of another 117 acres brings the total to 529 acres added to the San Miquel Natural Reserve. Today, TPL continues its conservation efforts to protect additional lands in this important coastal region of Puerto Rico.