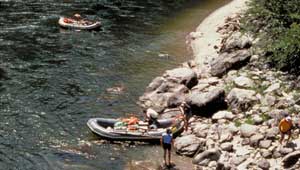 Located in central Idaho and totaling some 4 million acres, the Salmon-Selway Ecosystem is one of the wildest and remote areas in America. Offering unparalleled public recreation opportunities, this rugged complex of mountains, rivers, and forests includes the Selway-Bitterroot and the Frank Church-River of No Return wilderness areas, five national forests, and the Sawtooth National Recreation Area. Several species of salmon and the steelhead trout still swim as much as 900 miles from the Pacific Ocean to spawn in the high mountain tributaries of the Salmon and Clearwater Rivers, literally the highest salmon spawning habitats on earth.

Private land holdings that lie within the wilderness boundaries and throughout the Salmon-Selway are at risk of becoming developed, jeopardizing the wild character of the region and habitat for threatened and endangered species such as Snake River sockeye salmon, bull trout, bald eagle, and gray wolf.  For the past ten years, TPL has worked to conserve the most critical private lands, protecting important habitat, improving water quality, and ensuring continued public access for recreation.