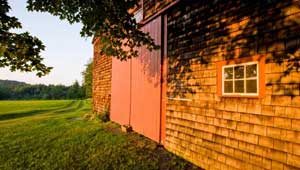 Raspberry Farm was a well-loved property that had been actively farmed since the late 1700s, and took its name from a popular pick your own berries and retail farm stand that operated during the 1980s and early 1990s. When the property was subdivided it seemed certain that its agricultural heritage, scenic views, and exemplary wildlife habitat would be lost forever.

The developer also proposed to demolish the historic barn that once housed the farm stand to make way for the subdivision. Concerned members of the community approached The Trust for Public Land seeking assistance in conserving the property. In the summer of 2008, TPL began negotiations with the landowner, and a year later was able to strike a deal.

The 41 acres of farm and forest are now owned and managed by the town of Hampton Falls as an addition to the adjacent 110-acre Hampton Falls Town Forest. The barn was protected under a separate preservation easement, held by the New Hampshire Preservation Alliance.