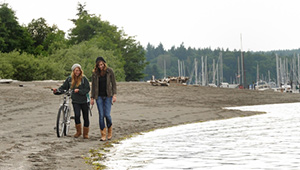 On March 30, 1942, 227 Americans of Japanese descent were forcibly removed from their homes and assembled at the Eagledale Ferry Dock on Bainbridge Island, Washington—the first of more than 100,000 Japanese Americans who would be unjustly interned during World War II. For years, Japanese Americans and island civic leaders worked to create a memorial to the event and to build a new waterfront park near the former ferry dock. In 2005, The Trust for Public Land used federal, state, county, and city funds along with private donations to secure 20 acres for the park, named in honor of the late congressman Joel Pritchard. Offering spectacular views of Puget Sound, Seattle, and Mt. Rainier the new state park provides new public access to the shoreline as well as space for the memorial’s visitor center and contemplative garden.