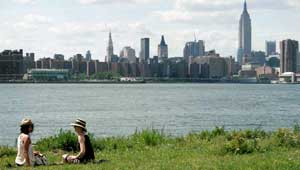 The North Brooklyn neighborhoods of Williamsburg and Greenpoint have miles of waterfront on both the East River and Newtown Creek, but unlike Manhattan residents across the way, the 160,000 residents of these communities had limited public access to the East River, a historical legacy of the shipping terminals and industries that dominated the waterfront. The shipping terminals and plants were abandoned or replaced by waste transfer stations, water treatment plants, or non-water-based industries that blocked public access.

In 2000, The Trust for Public Land helped Williamsburg create the East River State Park from two city blocks. In 2003, TPL joined local groups, including the Greenpoint Waterfront Association for Parks & Planning, to conduct open space planning. The resulting greenprint effort was timely as it coincided with massive re-zoning of both Williamsburg and Greenpoint, was in keeping with Mayor Bloomberg’s housing initiative, and acknowledged that these neighborhoods were no longer appropriate for heavy industry. Eventually, the rezoning proposal was amended to include several high priority open space measures identified by the planning process.