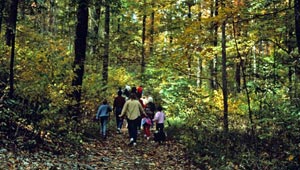 Huntsville, Alabama at the western edge of the Cumberland Plateau is known for the scenic beauty of Monte Sano and Green Mountains, which form the eastern backdrop of the city. Over the years, however, most of these mountain slopes overlooking the city had gradually been developed into exclusive residential subdivisions when The Trust for Public Land began work in the area.

In 1988, the Land Trust of North Alabama and the City asked TPL to help acquire one of the last large acreage tracts left on Monte Sano Mountain—the 540 acre Watts tract. The Trust for Public Land negotiated a purchase of the property for just under 5 million and helped the City acquire the site in late 1989. Almost one third of the funding came from the community, which strongly supported the project. Today, the property is jointly managed by the City and the Land Trust of North Alabama as a preserve and low impact recreation area, offering hiking, birdwatching, nature study, and gorgeous views of Huntsville.