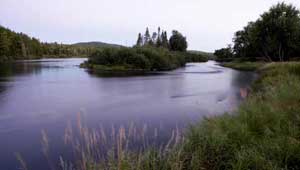 In late 2009, The Trust for Public Land and partners permanently protected more than 5,000 acres of forest, wildlife habitat, and recreational lands in northern New Hampshire. In two separate additions, more than 3,100 acres of the Mollidgewock Brook lands were added to the Umbagog National Wildlife Refuge, while the remaining 1,800 acres were added to Errol’s community forest, also known as 13-Mile Woods. This unique conservation success creates a 31,000-acre block of conserved land, much of which will be available to the public for recreation.

These lands are critical for waterfowl, birds, and aquatic species, including black duck, black-backed woodpeckers, 24 species of warblers, American woodcock, and brook trout.  Although heavily logged by the previous owner, the property’s forest and habitat will be allowed to return to their natural state.

The portion of Mollidgewock Brook acquired by the Fish & Wildlife Service is to be managed primarily for wildlife conservation. The community forest will be managed for sustainable timber harvesting, wildlife habitat conservation, and recreational access. Proceeds from timber harvesting will be used to pay down the debt held on the original acquisition of the 5,300-acre community forest. Once the debt is repaid, future harvest proceeds will support the municipal budget for schools, roads, and other town services. Both parcels will be forever off limits to development.