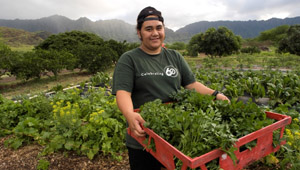 Hawai‘i’s character and economy are closely linked to the land, which is crucial to agriculture, tourism, and community identity. But much of Hawai‘i’s produce is imported from the mainland at high cost, and the state’s farmers are an aging population.

The nonprofit MA‘O Organic Farms in rural Lualualei Valley on O‘ahu provides tasty vegetables to local consumers while also offering career direction and leadership training to O‘ahu’s youth. The interns, most of them fresh out of Wai‘anae’s high schools, work the farm three days a week while attending community college.

In 2007-2008, The Trust for Public Land helped the farm expand by purchasing an 11-acre chicken farm next door. In 2010, we assisted the farm again, adding an additional 7.5 acres. In 2019, we assisted the farm again in adding 21 acres near Palikea to the farm – productive agricultural land that prior landowners had attempted to convert to industrial uses and a golf course. MA‘O Farms is now the largest organic farm in the State of Hawai’i. The additional land has allowed the farm increase its output of organic produce and expand its educational programs and number of youth served.

In November 2011, First Lady Michelle Obama toured the farm as part of her Let’s Move! program, highlighting it as a successful model for increasing awareness of—and access to—healthy eating options. Read more about her visit.