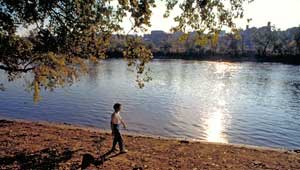 In 1996, Amherst County, the historic City of Lynchburg, and the Commonwealth of Virginia sought help in protecting a mile-long stretch of scenic bluffs along the James River across from Lynchburg’s downtown. The county and town wanted the land–site of a former concrete plant–as a greenway and a scenic complement to ongoing efforts to revitalize the historic downtown. The Commonwealth wanted to create boating access below an upstream dam. TPL secured the property for more than two years while the concrete plant was removed and other issues were resolved. Now owned by the commonwealth, the property has been leased to Amherst County, which has developed a waterfront park, along with the much-needed boating access.