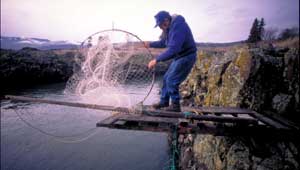 Located at the confluence of the Klickitat and Columbia Rivers, Lyle Point is a sacred site to the Confederated Tribes and Bands of the Yakama Nation. Lyle Point was a place where a Klickitat village existed for thousands of years and has traditional fishing sites protected by the Treaty of 1855. In 1992 a private developer bought the land from a railroad company to build a gated community over the burial areas and posed a threat to the traditional fishing access. Members of the Klickitat and Cascade Bands of the Yakama Nation and local environmental groups asked TPL to help them protect the land. TPL acquired the land in two separate parcels in 2000 and 2002, holding the land while working to find a steward who would conserve and protect the historical, cultural and spiritual land. In May 2007, TPL conveyed the land to the Yakama Nation, a steward that holds the land sacred.