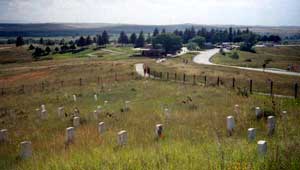 In 1986, The Trust for Public Land protected the entrance to Little Big Horn Battlefield National Monument, memorializing one of the Native American’s last armed efforts to preserve their way of life.

Little Big Horn memorializes the U.S. Army’s 7th Cavalry standoff with the Sioux and Cheyenne in 1876, when several hundred soldiers and Native American warriors were killed. In 1984, plans had been approved to build a motel at the entrance to this historic site. The Trust for Public Land is proud to have succeeded in saving this land from development, and preserving the integrity of this historic battlefield.