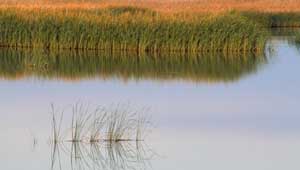 On the northwestern fringe of the Sacramento-San Joaquin Delta sits the 5200-acre Liberty island whose demise by flooding, and ensuing accidental restoration, have yielded an unexpected, and encouraging, future for the Delta.

In 1995, a large chunk of levee at the island’s southern tip crumbled, resulting in mass flooding. Repaired, it failed for good in 1997. In 1999, we acquired the island and managed it for more than a decade. During that time, the submerged island became home to one of the largest and healthiest populations of Delta Smelt in the north Delta, along with other threatened and endangered fish such as Chinook Salmon and Green Sturgeon.

In January 2011, TPL conveyed 4308-acres of the island to CA Department of Fish and Game for ongoing restoration and permanent protection.