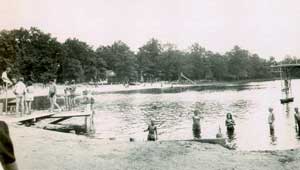 Longtime residents of Camden County remember summer days at Lake Worth-a private bathing beach from the 1920s to 1989. Once popular destination for swimming, picnicking, and fishing, the lake was drained and the park had fallen into disrepair. In the summer of 2001, an effort began to revive the park, creating one link in the River to Bay Greenway, a network of public open space that will some day connect Philadelphia with New Jersey’s Barnegat Bay. This visionary initiative received lead funding from the William Penn Foundation. TPL is partnering with several New Jersey townships and counties to make the greenway and Lake Worth revival a reality. In March of 2005, TPL created an addition to Lake Worth with the purchase of nine more acres. Lake Worth represents the second project completed as part of the River to Bay Greenway, and when fully restored it will be become the 20th park in the Camden County park system.